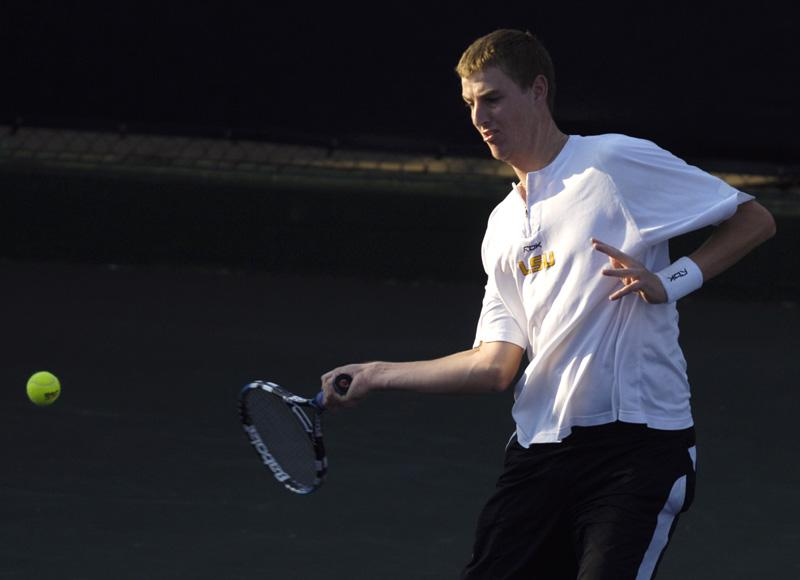 LAFAYETTE, La. — The LSU men’s tennis team will take part in the Ragin’ Cajun Invitational for the seventh-straight year this weekend at the University of Louisiana-Lafayette.

Six Tigers will head west to participate in the tournament. The tournament, which begins Friday and ends Saturday, will be comprised of three singles flights, Red, White and Black, and one doubles flight.

“This will be a good test for us as we start to wrap up the fall season,” LSU head coach Jeff Brown said. “It will be nice for James (Cluskey) to get some matches in for the first time this year.”

Junior James Cluskey will be making his first appearance this season after sitting out the first half of the fall with an injury. He will be the No. 1 seed in the top singles bracket (Red.) The Ireland native compiled a 25-13 record last season.

Also seeded in the Red bracket is freshman Julien Gauthier at the No. 3 slot.

Joining Cluskey and Gauthier in the Red bracket will be Sebastian Carlsson and Ryan Lissner.

In the White bracket, juniors Martel Campbell and Jonathan Tragardh are seeded No. 1 and 2, respectively.

All six Tigers competing will take part in the doubles portion of the tournament.

The doubles duos will consist of Cluskey and Gauthier, Lissner and Tragardh along with Carlsson and Campbell. Each Tiger tandem received a bye in the first round.