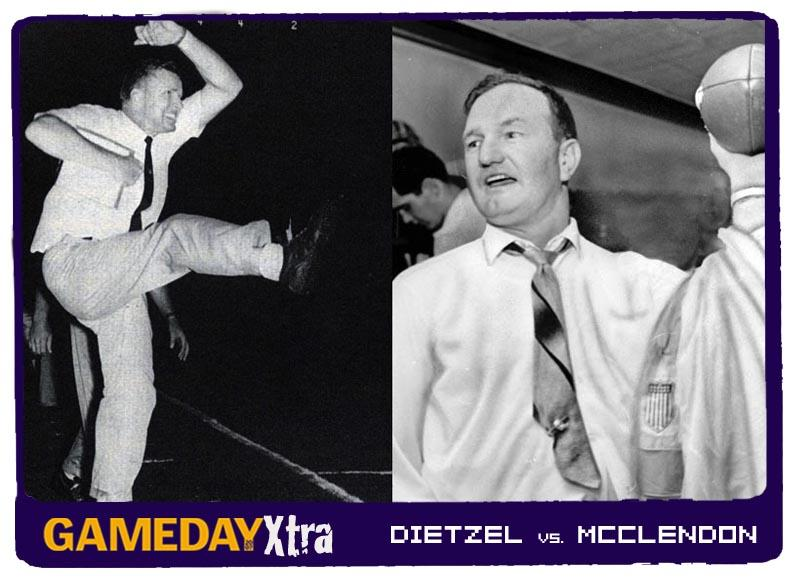 BATON ROUGE — It’s been talked about, written about and thought about for nearly 10 months and finally on Saturday, LSU will face its former coach in Nick Saban when the third-ranked Tigers travel to Tuscaloosa to take on 17th-ranked Alabama.

Kickoff for the contest is set for 4 p.m. in a sold-out Bryant-Denny Stadium. The game will be televised to a national audience by CBS.

With each team having an open date last week to prepare, the stage is set for a classic LSU-Alabama contest as both squads enter the divisional battle in a first place tie in the SEC West with identical 4-1 league records. The winner will have the upper hand in the chase for the SEC Western Division title.

And while this game carries a great deal of significance because of what will transpire between the white lines, the fact that LSU will be facing its former coach is what’s getting most of the headlines.

But it’s not the first time an LSU football team goes into a game with a familiar face on the opposing sidelines. Just over 40 years ago, the LSU football program, along with head coach Charlie McClendon, found itself in a situation similar to what the Tigers are faced with this week.

The year was 1966 and LSU opened its fifth season under McClendon against Paul Dietzel‘s South Carolina Gamecocks. Dietzel, who guided the Tigers to the 1958 national title, abruptly left the program following the 1961 season that saw him lead LSU to a 10-1 overall mark and the SEC title.

Feeling as if the challenge in Baton Rouge was gone, Dietzel headed for West Point, N.Y. to take over as head coach at Army. Two days after LSU let Dietzel out of a contract that still had four years remaining, his top assistant, McClendon, was offered the opportunity to succeed Dietzel as the head coach of the Tigers.

McClendon’s impact was immediate, leading the Tigers to a 9-1-1 overall mark in 1962, followed by a seven-win season in 1963, a Sugar Bowl appearance the following year and a Cotton Bowl appearance after the 1965 season. At the time, it was one of the most successful four-year stretches in school history.

Shortly after the conclusion of the 1965 season, Dietzel departed Army to take over as head coach at South Carolina. Ironically, the Gamecocks were scheduled to open the 1966 season, which would be their first under Dietzel, in Baton Rouge against LSU and McClendon.

What’s even more ironic was the fact that Dietzel had his hand in scheduling the game, which happened long before he departed LSU. Back in 1959, Dietzel suggested to then LSU AD Jim Corbett in 1959 that the Tigers should schedule a four-game series with South Carolina with games being played in 1960-61 and 1965-66. Little did Dietzel know that seven years later, he would be on the opposing sideline in Tiger Stadium facing a team that he had once led to a national title.

Obviously, the LSU fan reaction to Dietzel’s hiring at South Carolina resulted in an immediate sellout for the season-opener in Tiger Stadium in 1966. But unlike Saturday’s matchup between LSU and Alabama and Miles and Saban, where both teams and coaches have tossed bouquets to each other this week, that wasn’t the case leading up to the McClendon-Dietzel matchup in 1966.

Although McClendon and Dietzel were friends — they both coached on Bear Bryant’s staff at Kentucky in the 1950s — there was enough tension between the two to get McClendon worked up into quite a lather going into the game.

McClendon was quoted in Peter Finney’s book The Fighting Tigers as saying during the week leading up to the game with his former boss, “I’ve never wanted to win a football game more than this one. You can’t imagine how it’s been, coaching in the shadow of that guy. I’ve had the monkey on my back for four years. I’ve tried to be realistic about this game but I can’t. I’ve never been so worked up over anything. I’ve tried to keep from overcoaching and getting the boys wound up too much.”

Whatever McClendon did during the week worked as the Tigers, behind a splendid effort from quarterback Nelson Stokley, posted a 28-13 win over Dietzel and the Gamecocks. After the game, McClendon told Dietzel that “I finally got the monkey off my back.”

But it was the remarks by co-captain Mike Pharis in the lockerroom immediately following the game that meant more to McClendon than any victory could have. Pharis, in tossing the game ball to McClendon said, “You’re our coach. We’ve forgotten all about Paul Dietzel.”

McClendon went on to enjoy the finest coaching career in LSU football history, guiding the Tigers to a 137-59-7 mark in 18 seasons at the helm. McClendon’s appeared in more bowls (13), won more bowl games (7), and recorded the most wins (137) of a Tiger coach in school history.

On Saturday, Miles will take his Tigers into Bryant-Denny Stadium to face LSU’s former coach. There won’t be any need for a post-game speech by a player to know that Miles is the man at LSU, something that his players have already stated numerous times this week, and throughout the season.

What’s more important on Saturday is that a win over Alabama and Saban will keep Miles and the Tigers on track for a berth in the SEC Championship Game and ultimately a shot at winning the national title.