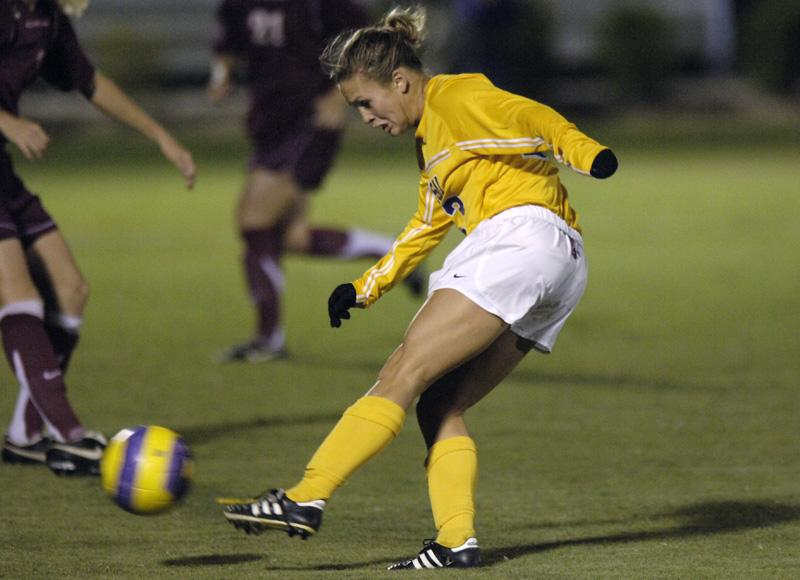 BATON ROUGE — The SEC Western Division championship is on the line Friday night as the LSU soccer team travels to Fayetteville, Ark., to battle the Arkansas Lady Razorbacks in a match scheduled for a 7 p.m. kickoff at Lady ?Back Field.

The Tigers (10-3-6, 4-2-4 SEC) can clinch their first division title in program history with a win over the Lady Razorbacks (8-10-1, 1-8-1 SEC) as they enter the match one point clear of Auburn in the SEC West standings with 16 points in league play.

LSU holds a 6-5-1 advantage in the all-time series and is riding a current three-game winning streak that includes a 1-0 shutout of Arkansas in Baton Rouge on Oct. 27 of last season.

“We excited about the position that we’re in, and we’re pleased to have our destiny in our own hands heading into Friday’s match,” said LSU head coach Brian Lee. “Now we’ve got to go and try to beat a very good Arkansas team. We really like the way they play and the style of soccer they try to play, and we expect a great effort from their team tomorrow night.”

The Tigers have already clinched a berth into next week’s SEC Tournament and could earn a seed as high as No. 4 with a win over the Lady Razorbacks on Friday night. It would be their highest seed ever as this marks the sixth time that LSU will compete in its conference tournament.

LSU’s four-game unbeaten streak was snapped Sunday after suffering a 5-0 defeat to 22nd-ranked Florida in Gainesville, while Arkansas is coming off of a tough 1-0 shutout at South Carolina.

“You always have little wake-up calls of different types during the season, and I thought Florida really taught us a stern lesson on Sunday,” Lee said. “We’re still a really young team and still learning what it takes to prepare and perform each game. Florida was on their game and ready to capitalize, and they were extremely impressive from the opening whistle.”

The Tigers look to rebound against a team that has dropped its last six matches while only scoring one goal during that span. The Lady ?Backs have not had a positive result since drawing No. 6 Tennessee on Oct. 7, while they have not won since blanking Mississippi State, 2-0, on Sept. 30.

Freshman Kelly O’Connor was Arkansas’ leading scorer with six goals and 15 points through 12 games this year but saw her season cut short after suffering a torn ACL against Georgia on Oct. 5.

Junior standout Lindsay Patterson has picked up the slack as she now leads the offensive attack with six goals and 14 points on the season. The Lady Razorbacks have been stingy in defense in 2007 as they boast the SEC’s fifth best goals against average at 0.86.

“Arkansas has consistently put in hard working and energetic performances throughout the SEC season,” Lee said. “It’s unfortunate that they just started losing kids to injury right around the time conference play started. Kelly O’Connor was well on her way to being the SEC Freshman of the Year before suffering a season-ending injury, and that really put a dent in their attack.

“But some of those kids are starting to come back, and we’re sure we’re going to get a great effort from their club with it being the last game of the season. We expect nothing less than a full tilt battle tomorrow night that will go down to the last minute.”

After battling Arkansas on Friday night, the Tigers return to the SEC Tournament for the first time since 2005 as the event returns to Orange Beach, Ala., for the third straight season with four games scheduled at the Orange Beach Sportsplex on Wednesday beginning at noon.