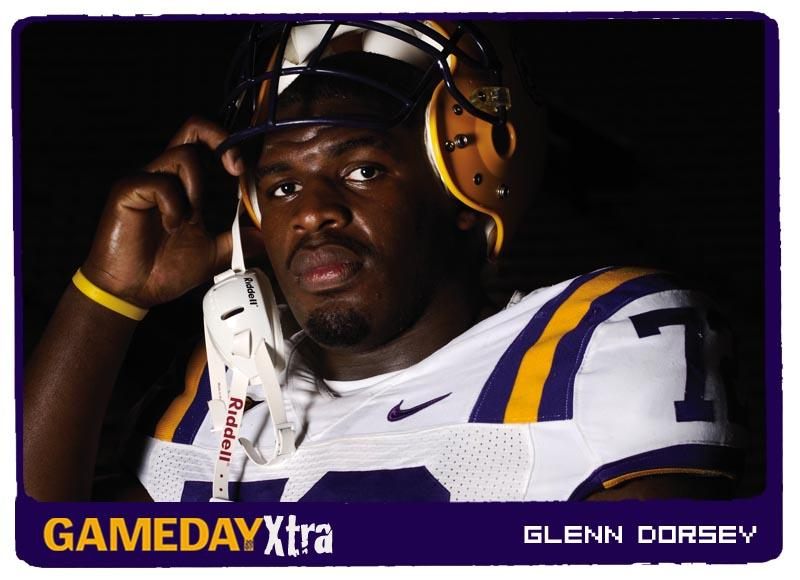 During the first two weeks of the season, some opposing players tried to downgrade the preseason hype of Glenn Dorsey by saying that they put their “pants on the same way” as the All-American defensive tackle. The fact is no player puts his pants on like Dorsey. Unless his legs bowed so bad as a kid that it required him to wear leg braces and if his thighs were so disproportional to his waist growing up that he had to use duct tape to keep his pants up, only then could he relate to Dorsey.

Dorsey overcame his Forrest Gump-like stage and is now the unquestioned leader of the No. 1 defense in the country. Since his pee-wee league days, his critics have refused to believe Dorsey was as good as his reputation, and they were right. Because after putting up big numbers this season while conquering double and triple teams, he has proven to be much better then advertised.

Dorsey was three years old when doctors told him his legs would not straighten on their own and that he would need to wear braces for at least a year. The news would be devastating to any child, but especially the boisterous Dorsey.

Dorsey hated watching his friends play outside while he was “sidelined” with brown orthopedic shoes connected by chains. Dorsey fell countless times as he relentlessly worked to get his legs straight.

Dorsey’s mom, Sandra, said Glenn watching his friends play without him motivated him to work on improving his legs.

“When he saw the other kids out in the field playing ball it encouraged him to try even harder,” Sandra said. “He was always worried he might not be able to play. He was so excited when he first realized he could play ball. The love of the game just kept him working at it.”

One thing that always kept Dorsey on his feet was a “Putt Putt” commercial. Every time the energetic Dorsey heard the commercial’s tune he would walk to the television to see it. His family and friends have called him “Putt” ever since.

Dorsey was eight when his legs were finally straight enough to play football.

“I really didn’t have the opportunity to run around like the other kids,” Dorsey said. “I would have to sit around and watch. When I was finally able to get out there and play I enjoyed it. I would sleep with a football and would dream about it because I just had to be around football.”

Dorsey’s dreams became nightmares for opposing players. Playing little league football in Gonzales, La., he was a dominant fullback for the St. Amant Wildcats.
Opposing parents tried to get him disqualified by saying he surpassed the league’s weight limit.

Dorsey would walk to the press box before every game to weigh in. Dorsey had his own scale but opposing teams brought their own just in case. The weight issue didn’t faze Dorsey, as he conquered the opposing parents’ scales as easily as he conquered their kids at the line of scrimmage.

Dorsey played in the band and on the football team at East Ascension High School. The practice times for both were starting to overlap and Dorsey had to choose to stick with only one. He chose football and after a dominating campaign as a Spartan, calls began pouring in from some of the top schools in the country.

Growing up, Dorsey was a Florida State fan. He enjoyed watching flashy Seminole greats Charlie Ward and Baton Rouge native Warrick Dunn. But as Dorsey got older, he began to attend LSU games.

“The older I got, I saw LSU was doing some great things and I kind of didn’t want to leave home,” Dorsey said. “I started to realize LSU gave me the opportunity to play top-notch football for the top-notch program only 20 minutes away from my house. It was a no-brainer for me.”

Dorsey made one official visit and that was to Baton Rouge. He committed to the Tigers at LSU’s Junior Day, five months before his senior season. It was important for Dorsey to tell the coaching staff in person, with his No. 1 supporter, Sandra, by his side.

Dorsey says it is his motor that drives him and he is sometimes shocked by the havoc he creates in the backfield. The mammoth 6-foot-2-inch, 303-pound Dorsey says the frustration of constant double and triple teams lights a fire in him, that when he finally gets through the extra attention, the ball carrier looks like a “deer in headlights.”

Dorsey has become a fan favorite not only because of his impressive stats but also due to his animated celebrations. The student section broke out in Glenn Dorsey chants throughout the South Carolina game, which is a sign of respect normally reserved for a head coach. Dorsey says his energetic celebrations are meant for the fans.

“I really don’t know what I am doing, I just start reacting and have fun,” Dorsey explained. “It feels good knowing they appreciate the hard work and effort I put in the game. I know it’s a team effort, but who sits back and watches a defensive tackle every play? I don’t score touchdowns and I might have one of the most boring positions to watch. It amazes me that they watch me at the position I play. I like to get the crowd in the game and let them know that we are playing for them and that we are all in this together.”

Earl Lane, who has been Dorsey’s defensive line coach for the two years he has been a full-time starter at LSU, said Dorsey’s enthusiasm carries over on the practice field. Lane credits Dorsey’s intensity as the main ingredient to his success.