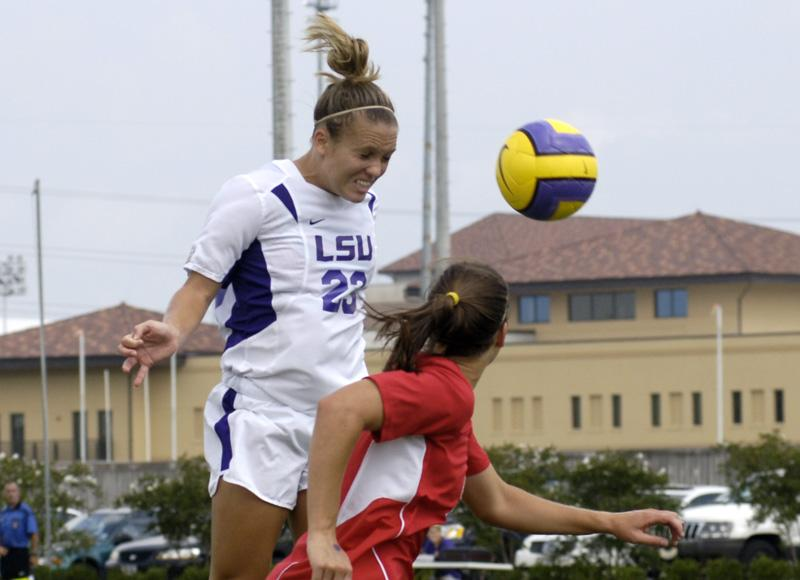 BATON ROUGE — Junior forward Roslyn Jones scored the equalizer in the 19th minute of play, but the LSU soccer team was unable add a second goal as it battled the Ole Miss Rebels to a 1-1 draw on Sunday afternoon at the LSU Soccer Complex.

The sides remained deadlocked after 110 minutes of action as a regional television audience tuned in to SEC-TV on Fox Sports Net for the season’s first “SEC Soccer Match of the Week.”

“I thought it was a perfectly fair result based on the flow of the game,” said LSU head coach Brian Lee. “Ole Miss was physical right out of the gate, but it turned into a great soccer match once play kind of settled down. I thought we were a little unlucky not to get a second goal, but we’ll take the result and move on.”

Hannah Weatherly put the Rebels on top early in the match with her third goal of the season at the 6:32 mark of the first half after gathering a long volley off the foot of Christine Breaux and chipping a shot over the head of LSU goalkeeper Valerie Vogler from about 12 yards out.

But the Rebels were unable to hold the lead as Jones evened the match at 1-1 just 12 minutes later with her sixth goal of the season at the 18:58 mark.

After sophomore Rachel Yepez sent a cross into the middle of the penalty area from the endline on the right side of the field, Jones was waiting inside the six-yard box for the rebound following the initial shot by sophomore Melissa Clarke. Jones is currently LSU’s second-leading goal scorer on the year and moves into a tie for second in the SEC.

Despite attempting only one shot on goal in the match, the Tigers created a number of chances to add a second goal with three shots deflecting off the frame in the second half and overtime.

“It was unlucky that we didn’t score a second goal to win the game,” Lee said. “We created some chances and had a couple shots hit off the crossbar in the second half. Melissa made a great run in the second overtime but was a bit unlucky to have her shot hit the post.

“But you can’t take anything away from the way Ole Miss played today. It was a fair result based on the flow of the game. It was a really up and back once the play settled down. This has been a very competitive series over the years, and we have a lot of respect for the Ole Miss program.”

The Tigers return to the pitch on Friday night as they welcome the 10th-ranked Tennessee Lady Volunteers to the LSU Soccer Complex in a match scheduled for 7 p.m., while they follow with a match against the Georgia Bulldogs on Oct. 7 at 1 p.m. Both sides have gotten off to a fast start in SEC play as they are on six points with identical 2-0 conference marks.