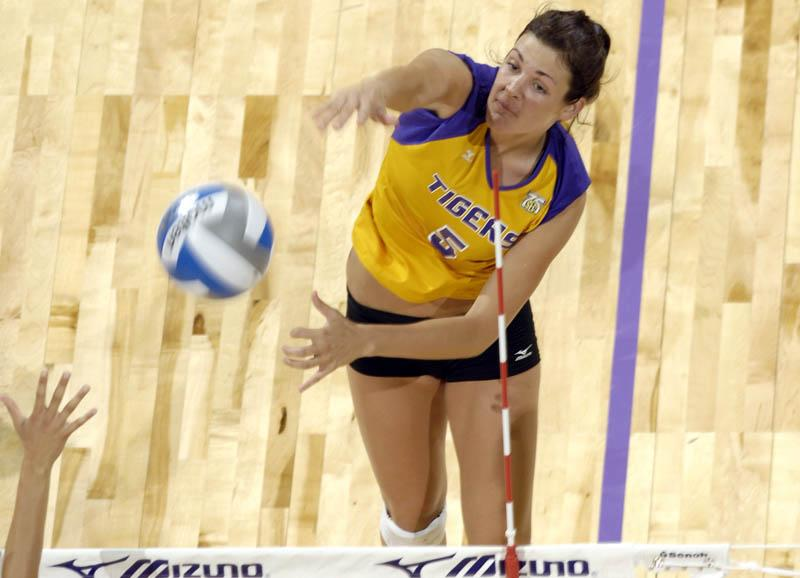 ATHENS, Ga. — The 22nd-ranked LSU volleyball team accomplished something no other team had done this season as the Tigers swept Georgia, 30-28, 30-27, 30-22, on Sunday afternoon at the Ramsey Center.

With the win, LSU improved to 13-2 on the season and 5-1 in Southeastern Conference play. The loss dropped the Bulldogs to 13-4 overall and 3-3 in league action. In Georgia’s previous four losses on the season, the Bulldogs took at least one game, including taking a game off of No. 6 Florida.

“This was a great win for us,” said LSU head coach Fran Flory. “We played very well and were very disciplined and I really liked our offensive efficiency. Georgia is a very solid team. They did a lot of things that made it very difficult and they played great defense but we showed great mental toughness and resiliency. It’s nice to get off the road with two wins this weekend.

For the second straight match, Brittnee Cooper led the match with 16 kills, topping her career high of 14 that she recorded on Friday against Auburn. In addition, the sophomore middle blocker hit at a .545 clip and tied for the match high with four blocks.

Elena Martinez led the match with 16 digs, followed by 10 from Marina Skender. Kyna Washington also added to her SEC-leading service ace average with three in the match. Washington also had three blocks and nine digs in the outing.

“Brittnee Cooper had probably one of her best matches and certainly Angela Bensend had a great night,” said Flory. “They keyed on Kyna and we had to rely on some different people today and those guys came through. I’m very proud of their effort.”

As a team, LSU rebounded from a poor hitting efficiency on Friday to record an outstanding .328 clip on Sunday. The Tigers recorded 54 kills with only 16 errors for the match, while Georgia was held to 46 kills and a .200 hitting percentage. LSU also led the match with eight blocks, three more than the Bulldogs’ five. The Tigers held a slight five-dig advantage on Georgia with 48 compared to 43 for the Bulldogs.

For the first time this season, LSU committed only eight service errors, the only time the Tigers have failed to commit 10 or more miscues. After posting a season high of 21 against Auburn on Friday, LSU rebounded with just eight, including none in game three, while also recording six aces.

In the first game, the Tigers held the SEC’s kill leader to only four kills as Georgia only posted 15 as a team. LSU used a 3-0 run to take a four-point advantage, 11-7. The Bulldogs came back to tie it up at 14 all, before LSU took the lead for good, 15-14. The Tigers led by as many as six, 24-18, but Georgia again tied it up at 25 all. Three-straight kills by Cooper, who finished with nine in the game, put LSU ahead by three as they went on to take the game, 30-28.

The Tigers jumped out to a seven-point lead mid-way through the second game, 14-7. Leading 17-10, the Bulldogs began to creep back into the contest. After having only two service errors in the first game, LSU missed on six occasions in the second game that helped Georgia. The Bulldogs chipped away at the Tiger lead until it got to within one, 25-24. LSU would not back down at that point and with the Tigers leading 27-26, LSU scored three of the final four points to go into the locker room with a two-game lead, 30-27.