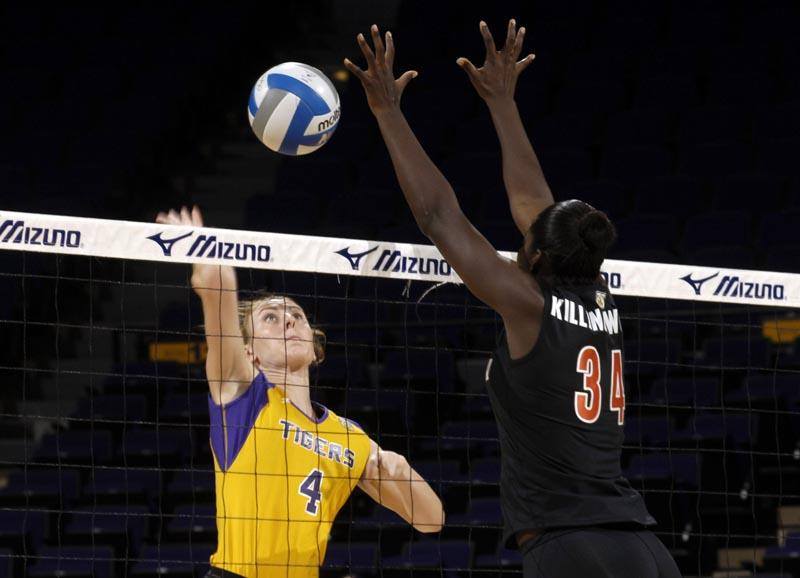 ATHENS, Ga. — After coming from behind to defeat Auburn on Friday, the 22nd-ranked LSU volleyball team will close out its road trip at Georgia on Sunday at 1 p.m. CDT in the Ramsey Center.

Live statistics will be available on the official LSU athletics website, LSUsports.net.

With their win on Friday, the Tigers improved to 12-2 on the season and 4-1 in the Southeastern Conference, one game behind Florida and Alabama in the conference standings as the Gators and Crimson Tide face off on Sunday. The Bulldogs are coming off back-to-back five-game wins over Ole Miss and Tennessee and stand at 12-3 on the year and 3-2 in league play.

“Georgia is the most improved team in the SEC from last year,” said LSU head coach Fran Flory. “This is a match that they feel will be vital to their season. We’re going to have to really play hard. We have got to address our error problem in both serving and hitting efficiency to be successful on Sunday.”

As a team, LSU and Georgia are fairly evenly matched statistically. The Bulldogs hold a slight advantage over the Tigers with 15.4 kills per game compared to 15.3 for LSU. Georgia also boasts a .253 hitting percentage, ahead of LSU’s .218 clip. The Tigers lead the SEC with 2.2 service aces per game, while the Bulldogs are averaging 1.9.

Defensively, LSU, the two-time defending SEC Western Division champion, is posting 3.0 blocks per game, third-best in the conference, while Georgia is posting 2.7 blocks per game. The Tigers hold a one dig per game advantage over the Bulldogs, posting 16.2 per game compared to 15.2 a frame. LSU also ranks second in the SEC with a .136 opponent’s hitting percentage, compared with Georgia, which is allowing opponents to hit .153.

LSU is the only school in the league with two players in the top five in blocks per game. Sophomores Brittnee Cooper and Lauren DeGirolamo are both averaging 1.43 blocks per game. DeGirolamo led the match with eight blocks against Auburn on Friday. Cooper posted a career-high 11 blocks against Florida last weekend and was named the LSU Female Student-Athlete of the Week.

DeGirolamo leads the Tigers and is fifth in the SEC with a .347 hitting percentage. The middle blocker is also second on the team with 3.26 kills per game. LSU is led by Kyna Washington with 4.27 kills per game, third most in the conference. A two-time SEC Player of the Week in 2007, Washington has recorded double-figure kills in 12 of LSU’s 14 matches this season. In addition, Washington is second in the league with 0.65 aces per game.

Junior Elena Martinez leads the SEC with an amazing 5.72 digs per game. In her first season as the starting libero, Martinez broke the school records with 34 digs in a five-game win Iowa and 33 digs in a four-game win over Arkansas. She has posted five of the top 21 dig marks in LSU history in only 14 matches this season and has recorded double-figure digs in every match.

After finishing last in the SEC last season, posting only two conference wins and just six wins overall, Georgia has rebounded this year with a new coach to surpass its SEC win total from last season in only five matches. In addition, the Bulldogs have already won 11 matches, five more than all of last season. In its three losses, Georgia has not been swept, even taking a game from sixth-ranked Florida.

“I think they play hard and anytime you have a new coach coming into a program, they are trying to make their mark,” said Flory. “They are going to be very prepared.”

“Georgia’s returners, especially Maria Taylor, are outstanding,” said Flory. “Taylor leads the league in kills per game. She is a physical player and we really haven’t faced that kind of outside hitter all year. We’re going to have to be very prepared against her. They’ve added some nice players and they are a fairly balanced team.”