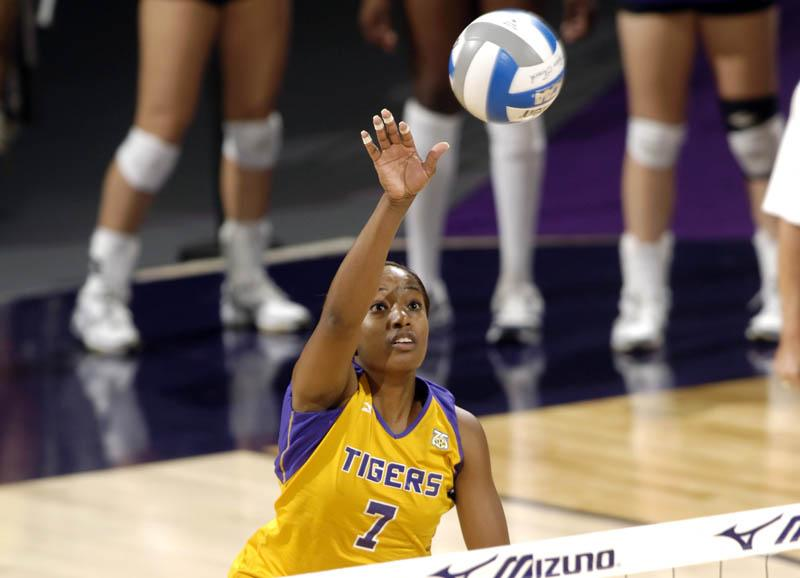 The purple and gold improved to 12-2 on the season and 4-1 in conference action. The loss dropped AU to 9-7 overall and 1-4 in league play. LSU improved its overall series advantage against Auburn to 29-11. The purple and gold have now won 12 straight over AU and 13 of the last 14.

“We are fortunate to get out of here with a win,” said LSU head coach Fran Flory. “We played well enough to win, but we did not have our best night. You have to credit Auburn. They are a tenacious team and they played great defense against us.”

Kyna Washington led LSU with 18 kills and 19 digs, along with three blocks and two timely service aces. Brittnee Cooper tied her career high with 14 kills while hitting .417. Marina Skender added 12 kills for the purple and gold.

As a team, LSU did not put up outstanding numbers offensively, hitting at a .194 clip for the match, but the purple and gold did out hit Auburn, who only posted a .135 mark for the match. In addition, LSU posted four more kills than AU, 62-58.

The purple and gold almost shot themselves in the foot, committing 21 service errors for the match, including one on match point late in game four. AU returned the favor somewhat, committing 13 service errors of its own. Auburn held a slight advantage blocking, 11.5 to 11, and out dug LSU, 79-63.

“Auburn caused us to lose our rhythm quite a number of times,” said Flory. “Ultimately our errors, especially in our service game, created some very difficult situations. We’re going to have to definitely address that and become much more efficient.”

In the first game, LSU fell behind early as Auburn pulled out to a 15-7 advantage. The purple and gold clawed back into it, cutting AU’s eight point lead to as few as one late in the game, 26-25. Unfortunately, LSU could not keep the run alive as an untimely ace by Auburn stretched its lead to three and helped AU take game one, 30-26.

The purple and gold responded in game two with authority. With the score tied at six, LSU went on a 5-0 run to take the lead for good. The purple and gold stretched their lead to eight, 18-10, midway through the game and kept that lead most of the way. Auburn got no closer than seven as LSU ran away with game two, 30-21, evening the match at two games each.

The third game was a dog fight the entire way, with neither team gaining more than a three-point lead at any point. The purple and gold fell behind, 9-6, and trailed again, 11-8, but tied it up at 12 all. LSU stretched its lead to 15-13, but AU tied it up at 18. With the purple and gold trailing, 20-19, three straight blocks by DeGirolamo put LSU in the lead once again.

After a timeout by Auburn, AU went on a 4-0 run that saw Auburn re-take the lead. With AU leading, 27-24, the purple and gold scored six of the final seven points, including back-to-back aces by Washington to close out the game, 30-28.

The fourth game played out in much the same way as the third, with the pair swapping the lead five times, while being tied 12. After falling behind, 3-0, the purple and gold came back to tie it up at nine. Neither team took the lead by more than three the rest of the way. With LSU leading, 26-22, Auburn came back to tie it up at 27 all as AU tried to keep the match alive. Auburn reached game point first, 29-28, but an error tied it up again.

On LSU’s first game point, Lonergan committed the last of the purple and gold’s 21 service errors to tie it up again. AU returned the favor with a service error of its own before a kill by the most unlikely person closed out the game. Martinez, the LSU libero, sent a ball deep into the right corner of the Auburn court that scored to give the purple and gold the game and the match, 32-30.