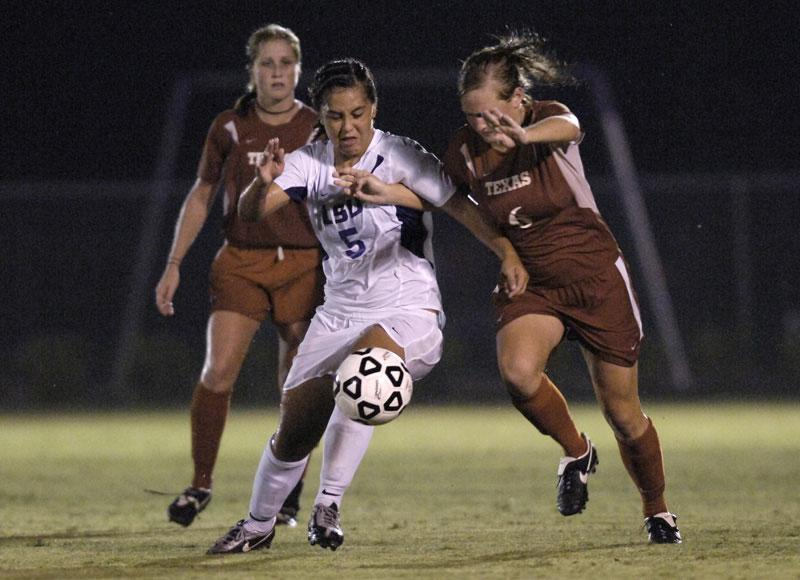 BATON ROUGE — Sophomore Michelle Makasini buried a header into the back of the net off a corner kick in the 28th minute of play to lead the LSU soccer team to a 1-0 shutout of Mississippi State in its SEC opener Friday night at the LSU Soccer Complex.

Freshman Taryne Boudreau curled a corner kick into the penalty area at the 27:41 mark when Makasini punched a header past Bulldog keeper Taryn Holland for her fourth goal of the season.

Makasini, who had not scored a goal in seven matches since a two-goal performance in LSU’s 7-2 win over Memphis on Sept. 6, helped the Tigers get back in the win column after suffering a 3-0 defeat at the hands of Davidson on Sunday afternoon.

“This was an important game for us because we needed to get off to a fast start in conference,” Makasini said. “We came out with more intensity than we did on Sunday and came away with a big win. It felt good to score a goal again after not getting one in so long. I attacked more than I have been and have more confidence going into Sunday.”

It was a night of near misses for both sides as the Tigers failed to convert on an opportunity to extend their lead to 2-0 in the 34th minute when sophomore Amanda Carreno ripped a shot off the near post from 10 yards in the left side of the penalty area.

The Bulldogs had the equalizer wiped off the scoreboard in the 63rd minute following an offside, while senior Jessica Davis blasted a header off the crossbar on a free kick in the 79th minute.

The Tigers controlled the action on the offensive end of the field throughout the match as they attempted a total of 15 shots with six shots on goal and six corner kicks on the night. Mississippi State managed just four shots for the match and did not record a shot on goal or a corner kick.

Senior Valerie Vogler was steady in goal throughout as she helped organize the Tiger defense when Mississippi State pushed players forward in an attempt to score the equalizer late in the game. The native of St. Louis, Mo., did not have to record a save as she posted her fifth shutout of the season and 11th clean sheet of her LSU career.

“We fought hard for 90 minutes tonight and earned a big win against a quality Mississippi State club,” said LSU head coach Brian Lee. “I thought we were a bit unlucky not to get a second goal somewhere along the line, but that’s a credit to the effort showed by the Bulldogs. Our back line stayed composed when they started pushing players forward late in the game.”

The Tigers return to action on Sunday afternoon as they take on division rival Ole Miss in a match slated for 1 p.m. that is scheduled for a live television broadcast as a part of SEC-TV on Fox Sports Net. The Rebels (4-3-2, 1-0-0 SEC) snapped a two-game losing skid on Friday night with a 2-1 overtime win over Arkansas at Lady ?Back Field.