GameDay Xtra: Behind the Scenes with CBS Sports 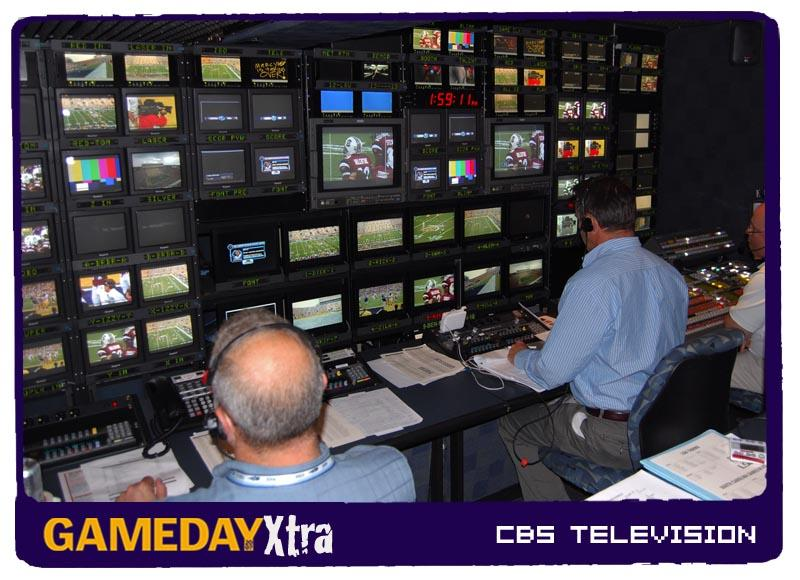 CBS selected to use a six-day window option for choosing what game to broadcast on Saturday, Sept 22. After seeing No. 2 LSU dismantle Middle Tennessee, 44-0, and South Carolina crack the top 12 with an impressive 3-0 start, CBS felt the Tigers versus Gamecocks was the perfect match up to showcase.

The CBS crew begins their preparation on Monday of game week as it compiles media guides, game notes and newspaper clippings from each school’s sports information department.

Show producer Craig Silver looks through the plethora of information to look for any nugget that could be used in a graphic or video package during the game. Silver knows he will cover the teams again later on the season, so he is particularly interested in stories he can build on as the season progresses.

“I start on Monday going over recaps, the teams and lineups,” Wolfson said. “On Tuesday and Wednesday, we have a conference call with the away coaches and players.”

Wolfson said one of her prime sources for information is a team’s local newspapers. She said she rarely goes on message boards or blogs unless she is trying to follow up a story.

Lundquist and Danielson spend more time reviewing game film as they need to know more about the X’s and O’s of each team.

The crew arrives in Baton Rouge on Thursday where the first thing they do is watch the Tigers’ practice, which is closed to other media. Coach Les Miles greets the crew, who he has got to know very well over his three years of leading the Tigers.

On Friday the CBS crew arrives at the football operations center at 9 a.m. to meet with the coaches and key players. Silver meets with LSU Sports Information Director Michael Bonnette to discuss SEC guidelines on the lingering chance of bad weather during the game. Bonnette informs him that defensive lineman Charles Alexander will be sidelined for the season with a knee injury.

When the crew meets with the coaches and players, they go through a number of questions regarding the game and the team, but they also want to get to know each one on a more personal level. Whether it is Miles’ 11-year-old son Manny’s desire to be a quarterback, Matt Flynn’s championship intramural softball team or Defensive Coordinator Bo Pelini‘s love for basketball, each individual touched on personal stories with the CBS crew.

During the four hours of interviews with the team, Lundquist and Danielson have a poster-sized depth chart that they make key notes on that they might want to use during the game.

The most entertaining point of the meetings came when Flynn described the story of his dad Alvin, who was a quarterback at Baylor in the late 60s’ and started a game in Tiger Stadium. Mike the Tiger’s cage use to be right outside the visitor’s looker room. Alvin and the Bears were pumped to run out on the field and face the Tigers. Little did they know, Mike the Tiger was more eager to face them. As the Bears walked out of the visitors locker room, they were so scared to see Mike the Tiger right outside they jumped back and walked single file against the wall to get to the field.

Equipment Manager Greg Stringfellow also met with the crew to discuss the new shoes Flynn will wear for at least the next two weeks for his injured ankle.

“They are called the Air-Flynns,” Flynn jokingly commented.

After the interviews Silver and the rest of the production crew spent the next day and a half putting together packages and graphics that will be used during the game.

Game day arrives and weather forecasts show that it will most likely rain throughout the day.

Lundquist and Danielson are sitting in the booth reviewing any last second notes, going over their poster-sized depth chart and reviewing the key points they should analyze during the game. Crew members have been at the stadium since 7 a.m. constructing the set.

Silver and the director sit in the television truck prior to the game scanning B roll footage to see what they can use during the game, particularly when they head into a commercial break.

“We have a really good shot of the two injured guys (Alexander and Early Doucet),” Director Steve Milton says to his coworkers. “I am not sure when we can use it though. Could Tracey possibly do a bit on how the injuries will affect the team?”

The shot of Alexander and Doucet ends up being used when Danielson and Lundquist were talking about how LSU’s depth is showcased by the absence of two key starters.

It rained profusely before the game and was still drizzling at kickoff. After the kickoff, the show cut to Wolfson on the sideline, who used her conversation with Stringfellow to talk about the rain’s affect on Flynn’s footing.

“The question will be ?how will Matt Flynn’s ankle sprain hold up if this rain continues?’” Wolfson tells the CBS audience. “He told us he was 90 percent going in. He will be wearing a custom made brace on that ankle. He will also be wearing specially made sneakers that he said are more comfortable than his normal tennis shoes.”

Lundquist has given some of the most memorable calls for some of the most dramatic plays in sports history. The veteran announcer was no different during this game when LSU’s Trindon Holiday scored the Tigers’ first touchdown.

“It’s Holliday…Oh its Christmas now!” Lundquist shouted as the LSU’s speedster raced in the end zone.

As the Tigers began to pull away, Danielson and Lundquist began commenting more about how dominant LSU’s defense has been and both of the teams’ road ahead.

Wolfson made her way amongst the 92,000 fans in the stands to speak to Flynn’s dad. Wolfson wanted the audience to know the story about Alvin’s Mike the Tiger story but knew it would deliver better if it came from the man himself. Wolfson sat between Flynn’s parents as Alvin recalled his encounter with LSU’s mascot.

SEC SECOND TO NONE

Wolfson says only covering one conference is something she really enjoys.

“It gives you a chance to build relationships with the teams and the coaches,” she commented. “You become closer with the team as you see them from game to game.

“Where as other places you might only cover a team for one time and may not see them the rest of the season. With that, you start a story but you aren’t able to run with it. We have gone from covering players in their freshman year to their graduation. That is something we are really fortunate to do.”

Danielson says he enjoys covering one conference as well but that it can be tough at times.

“It is also a double-edged sword,” Danielson said. “You have to be tough enough to face coaches and players that you may criticize during a game. They expect loyalty but they know that I am not Mike (LSU Sports Information Director Michael Bonnette.) They know that I am not on their team and that I have to call it as I see it, and I think they respect that.”
Lundquist is one of the most respected sportscasters and covers some of the biggest sporting events including The Masters, PGA Championship and the NCAA basketball tournament. However, he says there is something special about covering the SEC.

“What I find so attractive about it is not only the game itself, but everything that surrounds it,” Lundquist explained. “In the SEC, we have six of the 10 largest stadiums in the country. They are filled every week. The atmosphere, like here at LSU, the game is a sellout and game day and the day before are a celebration of college football. I love the atmosphere and the audience just as much I enjoy what goes on between the goalposts.”