'Committee' of Backs Running Up Yards 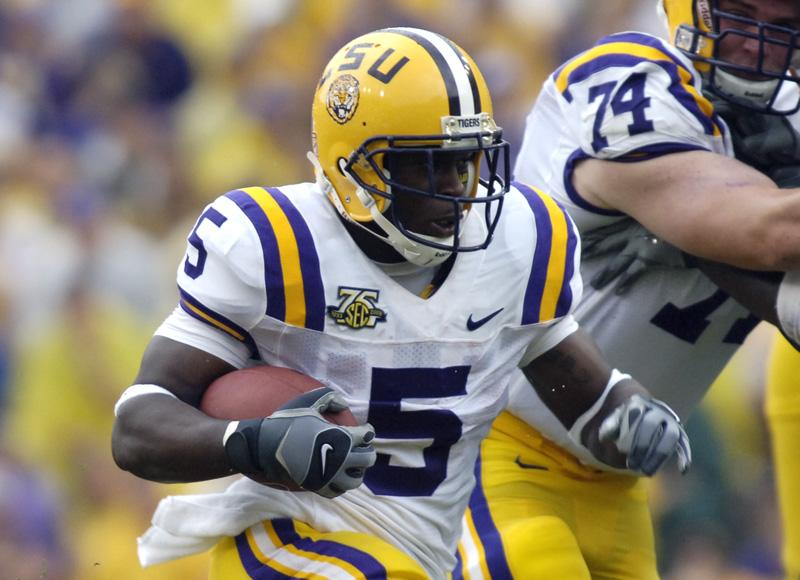 BATON ROUGE — A year ago, LSU’s offensive attack relied on big plays from a pair of explosive receivers in Dwayne Bowe and Craig Davis along with the strong arm of quarterback JaMarcus Russell.

Despite the loss of those three first round draft picks on the offensive side of the football, LSU’s numbers have been just as impressive through the first four games of the 2007 season. But instead of LSU picking up the bulk of its yards through the air, it’s been the running game that has been churning out the yardage for the Tigers.

Through four games, the Tigers are among the national leaders in scoring offense with an average of 41.2 points per game to go along with 452.5 yards of offense per contest.

And what’s even more impressive about this year’s offensive output, especially in the running game, is the manner in which the Tigers are doing it. LSU’s running back-by-committee approach is churning out 245.8 yards per game, a figure that ranks second in the Southeastern Conference and ninth in the nation. Of LSU’s 21 offensive touchdowns this year, 12 have come on the ground.

In four games, the Tigers have rushed for a total 983 yards, which is the most by an LSU squad since the 1997 team opened with 1,203 yards during its first four games. That year, LSU’s backfield featured names like Kevin Faulk, Rondell Mealey and Cecil Collins, all of which routinely went over the 100-yard rushing mark, and sometimes even eclipsed the 200-yard barrier, in games.

While this year’s group of running backs may be just as talented as the LSU backfield of 1997, it’s the approach that is the biggest difference between the two. The philosophy of the LSU running game is simple ? use a variety of backs in numerous ways and keep the players fresh for the fourth quarter.

It’s something that the players have bought in to and actually see the benefit of this approach.

“I’m comfortable with it,” backup Keiland Williams said. “It kind of keeps everyone healthier, and it kind of wears on the defense as the game goes along and they’re seeing different styles.”

That may be the most unique quality of the bunch as every player that lines up at the running back position for the Tigers brings a different style to the game.

First, there’s Jacob Hester – the leader of the group. Hester brings a hard-nosed, north-south and no non-sense approach to the field. A throwback of sorts, Hester’s a bruising runner who also contributes on LSU’s special teams. Hester has started all four games at tailback this year, and he leads the squad in both carries (53) and yards (294).

When Hester doesn’t have the ball, the Tigers go with sophomore Keiland Williams, a back with big-play capability who can break a long run at anytime. His 67-yard highlight-reel run against Virginia Tech was shown time and time again on SportsCenter.

Williams is second on the team in both carries (26) and yards (207) and first in touchdowns with four. Williams is the only Tiger running back to reach the 100-yard mark this year, going for 126 yards and a pair of touchdowns in the 48-7 win over Virginia Tech during the second week of the season.

Other running backs that have contributed for the Tigers include speedster Trindon Holliday, shifty Richard Murphy, and Charles Scott, who is blend of both Williams and Murphy. Holliday has 128 yards and one touchdown on 19 carries, while Murphy has 14 attempts for 67 yards and one score and Scott 11 touches for 52 yards.

Holliday, despite being the smallest scholarship player on the team at 5-feet-5 and 160 pounds, has displayed toughness, explosiveness and the ability to just outrun defenders from the running back position. He is coming off his best effort from that position a week ago, rushing for 73 yards and one touchdown in the win over South Carolina. His 33-yard first quarter run against the Gamecocks, one that saw him bust through a hole set by right tackle Carnell Stewart and go untouched to the endzone, set the tone for a Tiger offense that pounded South Carolina for 290 rushing yards on a wet field.

“There are different styles of running,” LSU coach Les Miles said. “It benefits the offense if the defense can’t zero in on what the offense is doing. It also gives a very fresh running attack. The backs aren’t getting a tremendous amount of carries. If you look at the number of guys who carry alls for us, (Jacob) Hester probably gets the most touches. I enjoy (this approach) because everyone is lending their piece and their talent to the team.”

A variety of backs with an assortment of ways in getting them the ball  has been the trademark for LSU during the first month of the season. Whether it’s Hester plowing ahead for yardage between the tackles, Williams getting the ball on an option, or Holliday on carrying it on a sweep, the Tigers will continue to rely on its running back-by-committee approach as long as all of the members on the group are producing.