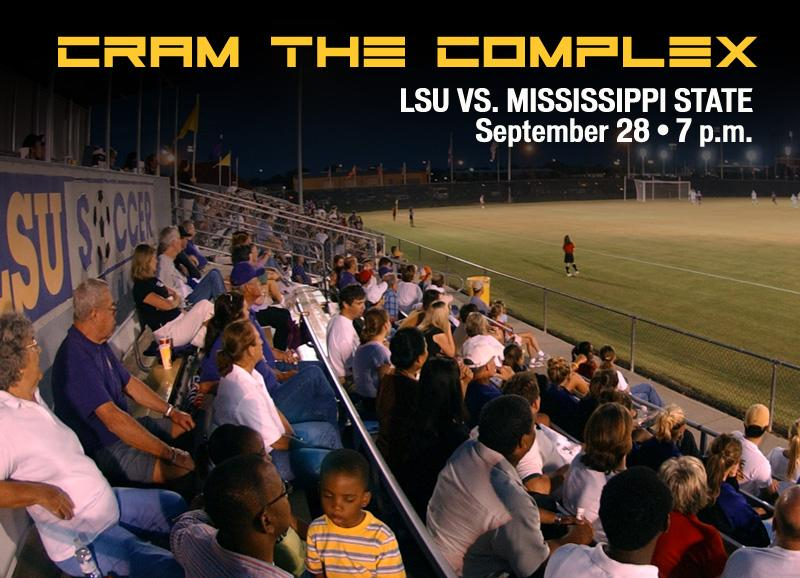 BATON ROUGE — The regionally-ranked LSU soccer team looks to get back on the winning track this weekend as it welcomes the Mississippi State Bulldogs to the LSU Soccer Complex for its Southeastern Conference opener on Friday at 7 p.m.

The Tigers (6-1-2) suffered their first loss of the season on Sunday with a 3-0 defeat at the hands of Davidson, while the Bulldogs (4-4-0) are also coming off of a 5-0 loss to Memphis on Sunday. LSU holds a 9-2-1 lead and is riding a five-game unbeaten streak in the all-time series.

The squad hopes to set a new attendance record for the third time this year as Friday’s match is the focus of this year’s “Cram the Complex” campaign. Tickets to the event are only $1.

The Bulldogs have already doubled their win total from last year as they are led by senior Treena Ferguson, who is currently tied for second in the SEC with five goals and tied for third with 13 points on the season. In addition, Ferguson is first in the SEC with 37 shots and 17 shots on goal.

“Mississippi State is always going to bring a good hard-nosed and physical team under Neil MacDonald,” said LSU head coach Brian Lee. “He’s a coach we have a lot of respect for, and he gets his kids ready to play day in and day out. It’s also going to be another great college soccer environment for the fans to enjoy, and we hope everyone is able to come out on Friday night.”

The Tigers have already set a new attendance record twice in three matches this season as they drew 1,868 fans for their season opener against Southern Miss on Aug. 31, while 2,160 fans packed the stands when McNeese State came to town on Sept. 14.

The previous attendance record was set during the “Cram the Complex” campaign two years ago as 1,689 fans witnessed the Tigers battle division rival Ole Miss on Sept. 30, 2005.

“We certainly think that we put an exciting product on the field, and the way we play is a creative and attacking style that is a lot of fun to watch. That’s played a key role in getting fans to come out big numbers this year,” Lee said. “We think that’s been worth a goal a game for our team, and it’s also fun for our kids to be able to play in that kind of environment.”

Fans are encouraged to donate canned food items at the game as LSU is in the final week of its 10-day long “Together We CAN” food drive. All of the canned food collected at LSU during the drive will be donated to the Greater Baton Rouge Food Bank.

Those unable to attend have the opportunity to listen to Friday’s match live on the Internet as it will be broadcast at www.totalsportsradio.com with Jason Kelly on the call.

Following its match with the Bulldogs, LSU will take on the Ole Miss Rebels at home on Sunday at 1 p.m. in a match that is scheduled for a live television broadcast as a part of SEC-TV on Fox Sports Net. This marks the second time this season that the Tigers will be on live television as the sides battled to a 1-1 draw in Oxford, Miss., a season ago.