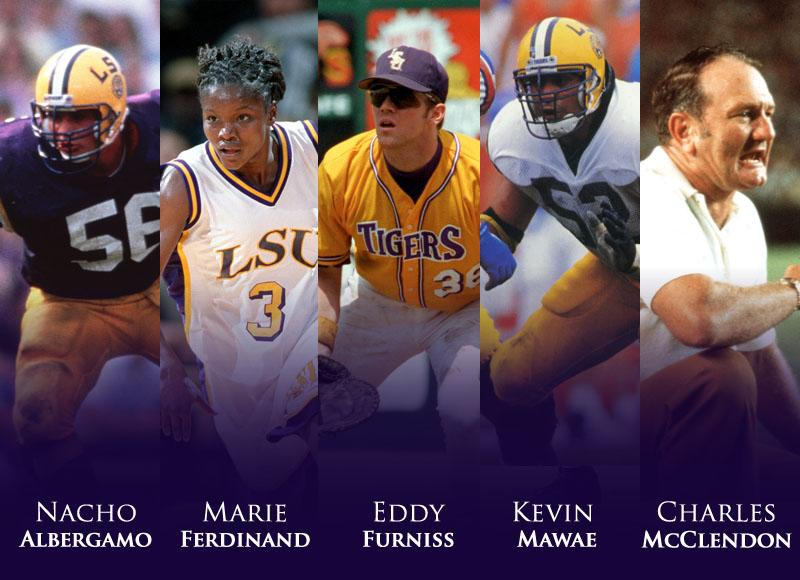 Jordy Hultberg served as master of ceremonies and a number of LSU Hall of Fame members were in attendance.  The LSU Athletic Hall of Fame Gala was sponsored by Desselle-Maggard Corporation.

Charles McClendon, who was also inducted posthumously, was the first coach elected to the LSU Athletic Hall of Fame under a new provision that allows for the induction of coaches or administrators who have made significant impact on LSU sports.

McClendon, the winningest coach in LSU football history, led LSU to a record of 137-59-7 while serving as head coach from 1962-79.  Also an assistant coach at LSU from 1953-61, McClendon led the Tigers to the 1970 Southeastern Conference championship and 13 bowl appearances.  He was the 1970 National Coach of the Year and was twice named SEC Coach of the Year.

Following his career at LSU, McClendon served as executive director of the Tangerine Bowl and was later the president of the American Football Coaches Association.

He was inducted into the National Football Foundation’s College Hall of Fame in 1986, won the Amos Alonzo Stagg Award for service to college football in 1992, and was given a Lifetime Achievement Award at the Paul Bryant Coach of the Year ceremony in 2001.  McClendon died in 2001 at the age of 78 after a lengthy battle with cancer.

Dr. Joseph “Nacho” Albergamo, a 1988 graduate of LSU, was one of the most decorated student-athletes in LSU history, excelling both on the field and in the classroom.  He was a consensus All-American at center in 1987, anchoring an offensive line that paved the way for a then-school record total offense mark of over 4,800 yards.  A four-year letterman from 1984-87, he was also named All-Southeastern Conference in 1987.

Albergamo was also a two-time Academic All-American in 1986 and 1987 and a three-time member of the SEC Academic Honor Roll.  He was named the Toyota Leader of the Year in 1987 and was also named one of just 11 National Football Foundation Scholar Athletes, while also being named an NCAA Top Six Finalist.  He also earned both an NCAA and SEC Postgraduate Scholarship.  A 1993 graduate of the LSU Medical School, Albergamo is now a practicing physician at The Baton Rouge Clinic.

Marie Ferdinand, a 2001 graduate of LSU, was one of the most explosive guards to ever wear the purple and gold for the Lady Tiger basketball team.  She was a first-team All-American in 2001 who helped usher in the modern day success of the LSU women’s basketball program.    A finalist for the Naismith National Player of the Year Award, she averaged 13.7 points and 4.1 rebounds per game in her career.  She led LSU to the Sweet Sixteen in 1999 and the Elite Eight in 2000 as the Lady Tiger program began to establish itself among the best in college basketball.

She also led the USA Women’s Select Team to a gold medal in 2000, and soon after was the third pick in the first round of the WNBA draft, at that time the highest draft pick ever for a Lady Tiger.  Currently a member of the San Antonio Silver Stars, she has played six years in the WNBA, and was a member of the 2002 WNBA All-Star Team.

Dr. Eddy Furniss, a 2000 graduate of LSU, won the Dick Howser Award in 1998, given annually to the National Player of the Year in college baseball.  A two-time first-team All-American, he helped lead LSU to two national championships, as the Tigers claimed College World Series titles in 1996 and 1997.  He was also named to the Academic All-American team three times.

The 1996 Southeastern Conference Player of the Year, Furniss is the SEC’s all-time leader in hits, home runs, RBI, doubles and total bases, and he finished his career as the fourth-leading home run hitter in the history of college baseball.  He was also active in many community service activities as a student-athlete at LSU.  He recently graduated from the University of Texas Health Science Center.

Kevin Mawae, a 1993 graduate of LSU, was a third-team All-American, first-team All-SEC selection and four-year starter on the offensive line for the Tigers from 1990-93.  Mawae excelled as one of top centers in the nation during a period when LSU experienced four straight losing seasons and garnered minimal national recognition as a team.  He earned Freshman All-SEC honors in 1990, and then was named All-SEC each of his remaining three years with the Tigers.

A second-round NFL draft choice by Seattle, he played four years for the Seahawks and eight years for the New York Jets, during which time he was named All-Pro six times.  He now plays for the Tennessee Titans.  He is a member of the NFL Players Association Executive Committee, serving on the Diversity and Competition committees of that organization.  An active community member, he has raised over $300,000 for autism research.