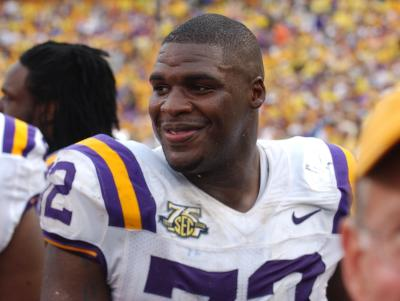 BATON ROUGE — A record-setting performance by a Tulane running back, along with a solid defensive effort and an unusual special teams performance by LSU players were the choices of the panel of voters for this week’s Louisiana Sports Writers Association Louisiana college football players of the week.

Matt Forte of Tulane took top offensive honors, while Glenn Dorsey of LSU took defensive honors with Colt Davis of LSU the special teams’ player of the week. The weekly winners are chosen by a panel of LSWA members after nominations are compiled from sports information directors from state football-playing schools.

Forte, a senior from Slidell, set school and Conference USA records with 303 rushing yards and five touchdowns on 40 carries in Saturday’s 35-27 win over Southeastern Louisiana at the Louisiana Superdome. Forte had touchdown runs of three, four, 11, 21 and 22 yards to set a Tulane single-game touchdown record and tie a league standard. He also broke the previous team record of 249 yards rushing set by Mewelde Moore against Cincinnati on Oct. 6, 2001 and the former C-USA rushing mark of 300 yards, set by Houston’s Joffrey Reynolds in 2002.

The five touchdowns eclipsed a record that had stood since 1925 when Charles “Peggy” Flournoy had four TDs vs. Louisiana Tech. The rushing yardage was also the second most over the last three years in the nation.

On the defensive side, Dorsey had another solid game for the Tigers in their 28-16 win over 12th-ranked South Carolina at Tiger Stadium. The senior from Gonzales recorded eight tackles, including seven solo stops. He also added a sack for a seven-yard loss and batted down a pass at the line of scrimmage.

Dorsey led a Tiger defense that held South Carolina to only 17 rushing yards and only one first down via the rush as LSU’s opponent was forced to make a quarterback change during the contest for the fourth time due to lack of performance.

The special teams’ choice was a unanimous decision after Colt David of LSU took a no-look over the shoulder pass from Matt Flynn and walked in 15-yards untouched for a score that upped LSU’s halftime margin to 21-7 over South Carolina. It was the first career touchdown for David and then he kicked the extra point for what is believed to mark the first time since Doug Moreau back in the 1960s that a player scored the touchdown and then remained on the field to kick the PAT. David, a junior from Grapevine, Texas, also added three other PATs in the victory.