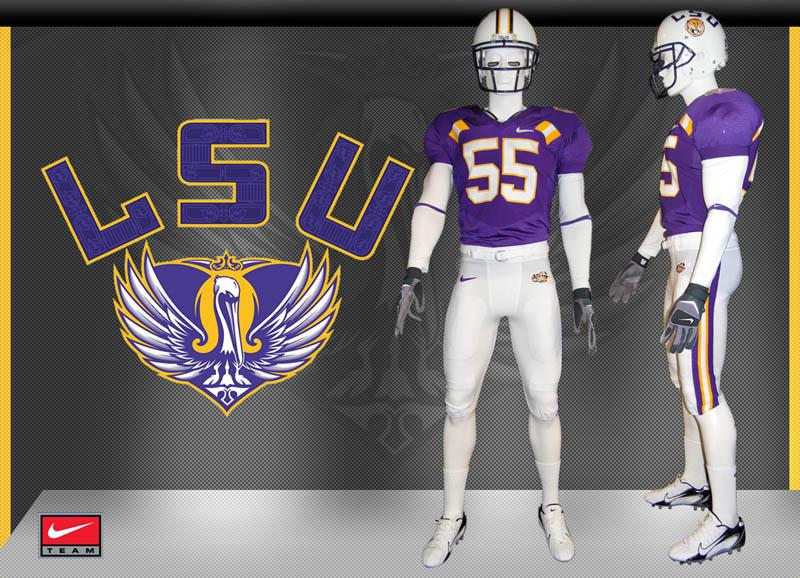 BATON ROUGE — The LSU Tigers will wear special uniforms for its game against Tulane on Saturday as part of an effort to assist the Hurricane Katrina recovery efforts in New Orleans.

The uniforms will feature purple jerseys with a special emblem emblazoned on the shoulders, with white helmets and white pants.

All merchandise is available online at LSUshop.net or at the LSU Athletics Gift Center.

Nike has introduced a set of limited edition jerseys and other apparel with part of the proceeds from sales earmarked for assisting the youth of New Orleans.  Worn by both teams, the uniforms will feature a special pelican emblem designed by Nike. The Pelican emblem is a tribute to the state bird and stylistically resembles the Phoenix, a symbol of the City’s rebirth.  The emblem will be one of several new additions to Nike’s LSU and Tulane products, which will be on sale at the game and in select retail locations throughout the US.  Proceeds from the sale of this product will go towards Nike’s Let Me Play New Orleans fund to help rebuild New Orleans through Sport.

“It’s a wonderful thing for Nike to step up and show the want and desire to sponsor this game and to get behind an event that will bring a great deal of attention to an area that was so adversely affected by Hurricane Katrina,” LSU coach Les Miles said. “This is just another example of Nike’s commitment to the people, especially the youth, of New Orleans and surrounding areas as they continue to rebuild this wonderful city.

“We are excited and honored to be a part of this game and to do our part in continuing to raise awareness of the work that still remains in helping restore New Orleans.”

Nike has announced plans to expand their long-term commitment to New Orleans youth with a series of projects including ReUse-A-Shoe drives, Nike Grind court donations and limited-edition product sales in  partnership with the Greater New Orleans Foundation.

Events will begin Sept. 29 at the LSU/Tulane college football game in the New Orleans Superdome where Nike will introduce limited edition jerseys.

In its continuing effort to empower young people through sport, Nike will collect used athletic shoes at the September 29th game as part of its Reuse-a-shoe program, which recycles old athletic shoes into Nike Grind material to create new sport surfaces.  Shoes collected during this large-scale recycling effort will go towards the refurbishment of courts at four New Orleans Recreation Department (NORD) facilities: Sam Bonart, Taylor playground, Stallings-Gentilly and the St. Bernard Center.  Nike will expand its collection sites to include Niketowns, Nike Factory stores and several retail partners in 36 US cities beginning Oct. 1.

“Through the donation of old, worn-out sneakers, children and families across the country can do a simple thing to help rebuild the devastated Gulf Coast region,” said Chad Boettcher, Nike Corporate Responsibility Director.  “Nike is part of this community and this is just one of many projects we’re implementing across the country to help the citizens of New Orleans rebuild.”

“We know there is still much work to be done to help bring sport back to New Orleans,” said Sandy Pressley, General Manager of Nike’s Southern Region.  “We hope the community here in New Orleans, and across the country will help come out and support us through this ReUse-a-Shoe collection.”

For more information about Let Me Play, visit www.letmeplay.com or www.nikeresponsibilty.com.

About Let Me Play
Let Me Play ? Nike’s new signature community effort ? will expand the company’s commitment to sports and physical fitness for youth through the recognition that by playing sports, young people can make themselves, their communities and their world better.  In additional to building surfaces for play, Let Me Play provides grants and product donations to support young people in their quest for sport; and it brings volunteers, organizations and decision-makers together to improve opportunities that help youth grow up healthy and active

About Greater New Orleans Foundation
The Greater New Orleans Foundation (GNOF) is a non-profit organization serving the Southeast Louisiana community for over 20 years through programs that provide education, health, community revitalization and regional economic and workforce development. Today, GNOF administers total assets of $170 million in more than 700 charitable funds with the support of innovative leaders. Most recently, GNOF launched the ?Rebuild New Orleans Fund’ as a response to the needs of Katrina victims with contributions totaling over $30 million. This 5-year initiative seeks to strengthen the capacity of New Orleans’ nonprofit sector, encourage the creation of new, responsive institutions and create community infrastructures that are racially and socially inclusive.