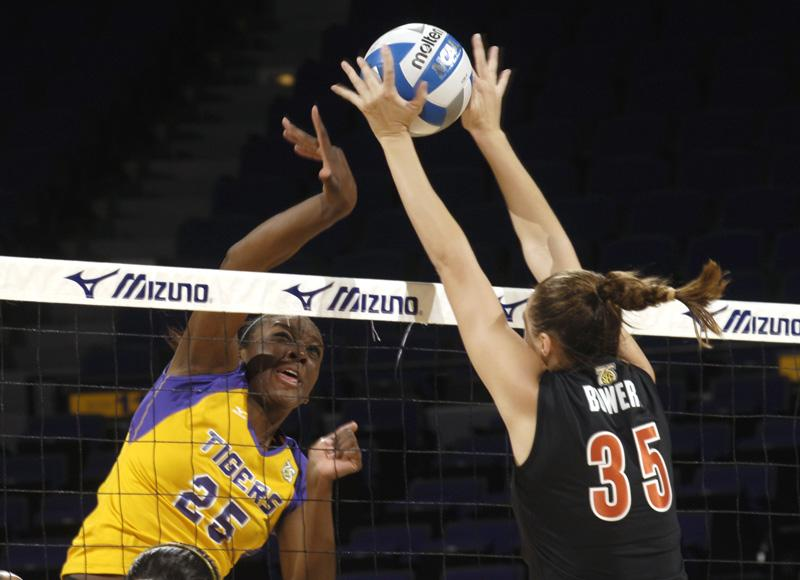 BATON ROUGE — Despite a career-high 11 blocks from Brittnee Cooper, the 22nd-ranked LSU volleyball team could not hold off No. 6 Florida on Sunday afternoon in the Maravich Center, falling, 30-25, 30-24, 27-30, 30-24, in a showdown of the top two teams in the Southeastern Conference for the past three years.

The loss is only the second of the season for the Tigers, who fall to 11-2 on the year and 3-1 in conference play. The Gators remain undefeated at 11-0 with a 4-0 mark in the league. LSU, however, was able to take game three from Florida, marking just the fourth game the Gators have dropped this year.

The loss marks just the third for the Tigers in the Maravich Center since 2004, compared to 21 wins, and also snapped a seven match home winning streak. The only three losses have come to teams ranked in the top 10, including two to the Gators. LSU, however, has not been swept at home since Oct. 26, 2004, against Arkansas.

Cooper led the match with 11 blocks, marking her first double-figure blocking mark. Her nine block assists tied for sixth in a four-game match in school history. The sophomore from Houston also finished with12 kills, second best on the team, with a .261 hitting percentage.

Kyna Washington led the Tigers with 14 kills, while adding two service aces, five digs and three blocks. Elena Martinez led LSU with 21 digs, her ninth 20-dig match of the year. Marina Skender led the Tigers with four of LSU’s 11 service aces, moving the junior to within four of the top 10 in career aces in school history. Lauren DeGirolamo finished with five blocks, moving her past the 250-block mark in just her sophomore season.

Sophomore Maggie Lonergan posted 36 assists to lead the Tigers, while also posting three aces. Brittney Johnson came on to set on the front row in the third and fourth games and finished with nine assists and three blocks.

Although neither team hit very efficiently, with LSU recording a .123 clip, its lowest of the season, and Florida at .221, its second worst of the year. The Gators out killed the Tigers, 65-55, just the third time all year LSU has been out killed.

“We can’t make this many hitting errors and beat a top 10 team,” said LSU head coach Fran Flory. “We feel like we had opportunities. We never really got into a rhythm offensively for any length of time. When we got into rhythm, we were very successful, but we didn’t get into a rhythm and maintain it. That’s probably the biggest frustration.”

The Tigers lead Florida in the match with 16.5 blocks after recording only four through the first two games. Florida finished with 12.0 blocks, recording only five over the final two games. A big statistical difference came in digs as the Gators posted 73, compared with only 53 for LSU.

“They had 12 blocks and credit them for forcing us to make hitting errors, but we were not very tough minded and very disciplined,” said Flory. “We just had some absolutely horrible hitting errors at horrible times. You have to credit them a bit because they brought some heat swinging and we didn’t handle the first tempo ball well. Part of the reason we weren’t playing fast was because of what they were doing to us. We just have to be tougher than that and adapt from that.”

Florida came out and set the tone early in the first game with three straight points to start before stretching out to a four-point lead, 9-5. The Tigers came back to tie it up at 10 all, before taking the lead, 11-10. The Gators then went on a four-point run to take the lead once again, but LSU would not back down. After trailing by as many as five, 17-12, the Tigers tied it up at 20 all and took the lead once again at 21-20. With LSU leading, 22-21, Florida scored three-straight got take the lead for good. The Gators took game one, 30-25.

The Tigers took an 8-4 lead early in the second game, but Florida came back to tie it up at nine all and pulled ahead, 11-9, as part of a four-point run. After the score was tied at 14, the Gators took the lead for good in game two. Florida went on to take the two-game lead into the locker room, 30-24.

The pair played the third game very close, with the lead changing back and forth seven times, including 12 ties. The Gators held the largest lead in the early going, 10-7, but LSU tied it up at 10 all. Florida again pulled ahead, 19-16, but the Tigers knotted it up at 20. With the score tied at 25, the Tigers used two blocks by Cooper to send it to game point before an ace by Martinez stretched the match to four games, 30-27.

LSU looked like it would send the match to five games early on in game four. The Tigers opened up their largest lead of the match mid-way through, 15-7. Florida used a four-point run to inch back from six-points down to cut the lead to two, 17-15. Eventually, the Gators were able to tie it up at 21. LSU took the lead once again, 24-21, but Florida scored the final nine points of the game to end the match, 30-24.

“The pill we have to swallow is that we probably had a grand opportunity here,” said Flory. “We had them on their heels and they backed us down. Too bad for us because we had a chance. They backed us down by coming at us and once they backed us down, we made hitting errors. Not only did they make great plays, but we made bad plays. When you couple that together, you can’t beat a really good team.”

LSU returns to the road next weekend as the Tigers travel to Auburn and Georgia. The LSU Tigers will take on the Auburn Tigers on Friday at 7 p.m., before facing the Bulldogs on Sunday at 1 p.m. CT. The Tigers return home to face Alabama and Mississippi State the following weekend as LSU kicks off the “Dig for the Cure” campaign.  The Tigers will be raising money as part of Breast Cancer Awareness Month throughout October.