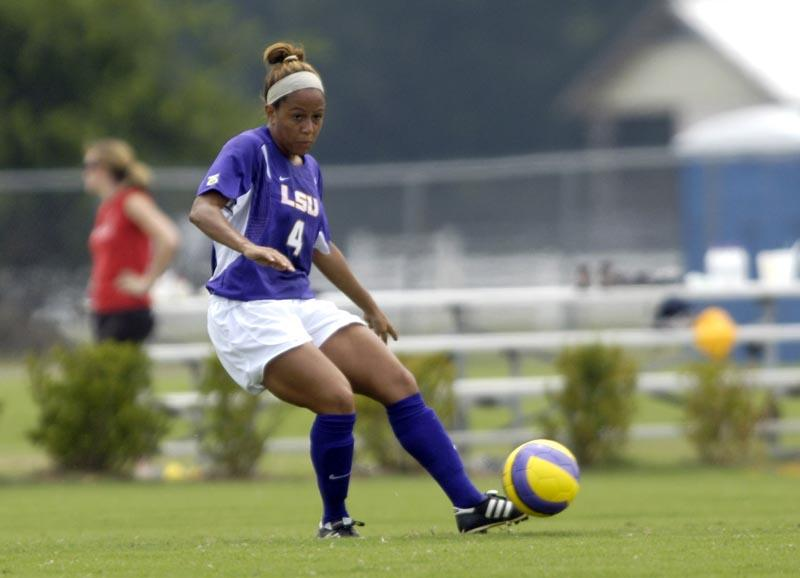 MT. PLEASANT, S.C. — The LSU soccer team saw its 10-game unbeaten streak come to an end and suffered its first loss of the season Sunday as it fell to Davidson, 3-0, in the third match of the College of Charleston Tournament at Patriots Point Field.

The Tigers (6-1-2) dropped their first decision since falling 2-1 to South Carolina on the road on Oct. 20, 2006. Davidson (4-3-0) earned its second win over a Southeastern Conference opponent in as many games after defeating Vanderbilt, 2-1, in overtime on Friday night.

“Full credit to Davidson for coming out ready to play and competing the way they did today,” said LSU head coach Brian Lee. “They worked hard as a team today and stayed organized for the full 90 minutes. We missed on a couple of chances early on, but they came back and finished.”

Midfielder Courtney Hart put the Wildcats on top in the 32nd minute after burying a one-timer in the back of the net from the top of the six-yard box on a free kick from fellow midfielder Allison Drutchas. Hart’s was the only shot recorded by Davidson in the first half of play.

Davidson pushed its lead to 3-0 in the second half with a pair of quick strikes from midfielder Lauren Connor at the 73:01 mark and forward Kyri Bye-Nagel at the 74:54 mark.

“We have to put this game behind us and get ready to play again on Friday night,” Lee said. “It’s important that we learn from this game and move forward. We’re now starting our second season, and we need to come out focused and ready to go for the start of conference play. It will be a great test of our character moving forward.”

The Tigers return home next weekend for the start of SEC play as they welcome the Mississippi State Bulldogs to the LSU Soccer Complex in a match slated for 7 p.m. They follow with a match against division rival Ole Miss on Sept. 30 at 1 p.m. that is set for a live television broadcast as a part of SEC-TV on Fox Sports Net.