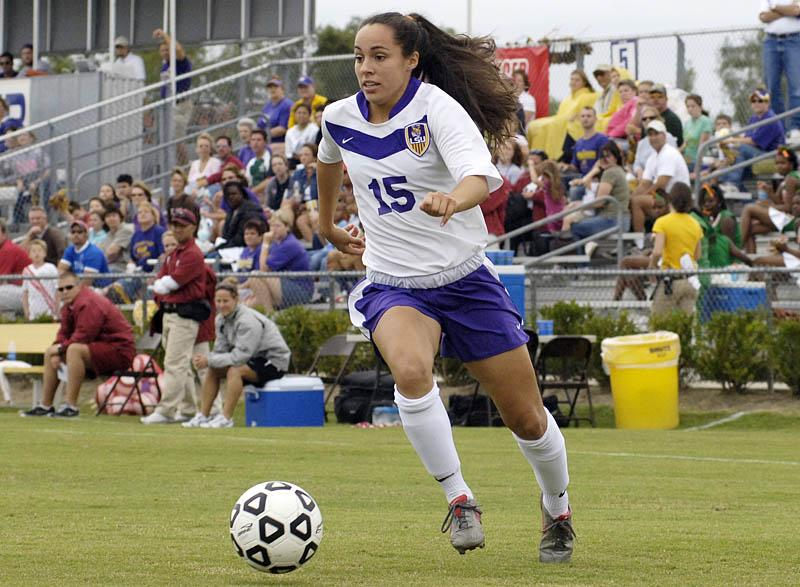 CHARLESTON, S.C. ? Sophomore striker Rachel Yepez put the Tigers on the board just 1:15 into the match and added a second goal in the 47th minute to lead the LSU soccer team to a 4-0 shutout of College of Charleston on Friday night at Patriots Point.

Yepez, who entered the match as the leading goal scorer in the SEC, tallied her eighth goal of the season in the second minute after controlling a centering pass from sophomore Melissa Clarke and finishing with a strike from seven yards out in the center of the penalty area.

The native of Fayetteville, N.C., provided the final margin with her second goal of the match and ninth of the season at the 46:06 mark, chipping a shot past the keeper from inside the six-yard box after sophomore Malorie Rutledge served a cross to the far post from the right wing.

“We’re really playing great as a team right now,” Yepez said. “It’s a lot of fun to play with these girls and know that we have a lot of trust in one another when we step on the field. I’ve worked really hard to get ready for this season, but they’ve helped me improve as much as anything else. It’s just another step forward going into SEC play.”

Clarke pushed the LSU advantage to 2-0 with her fourth goal of the season less than four minutes into the match after she collected a pass from sophomore midfielder Amanda Carreno at the top of the 18-yard box and ripped a blast just under the crossbar at the 3:59 mark.

The Tigers (6-0-2) took a 3-0 lead into the halftime break after the Cougars (3-3-0) were credited with an own goal in the 35th minute of the first half. Yepez raced to the end line and sent a cross into the middle of the penalty area when College of Charleston defender Danielle Jordan chipped the ball into her own netting while trying to clear it out.

LSU was impressive on the offensive end of the field throughout the match as 12 of 14 shots hit the frame while the side attempted seven corner kicks in 90 minutes of action. The Cougars were awarded just six shots with three shots on goal and two corner kicks for the match.

The Tigers also stood firm on the defensive end as senior Valerie Vogler and junior Jackie Moseley combined for the squad’s fifth shutout of the season. The Tigers have now outscored their opponents this season by a convincing margin of 27-5 in eight matches.

“It was another great performance tonight against a quality opponent,” said LSU head coach Brian Lee. “We came out flying with two early goals and that made the rest of the game easier.

“I thought Val Vogler and our back line stood firm for us once again, and the midfield worked very hard to create a number of great chances to score,” Lee said. “The forwards played well for us again tonight, and we did a great job of putting shots on frame. It’s another good step forward for this club as we approach the start of SEC play.”

The Tigers continue to roll as they are off to their best start in program history following the win over College of Charleston, while they have also tied a team record as they are currently riding a 10-game unbeaten streak dating back to the end of the 2006 season.

The squad wraps up its non-conference slate on Sunday at 11 a.m. CDT as it takes on Davidson at Patriots Point in the third match of the College of Charleston Tournament. They open SEC play at home next weekend as they welcome Mississippi State to Baton Rouge in a match slated for a 7 p.m. kickoff at the LSU Soccer Complex.