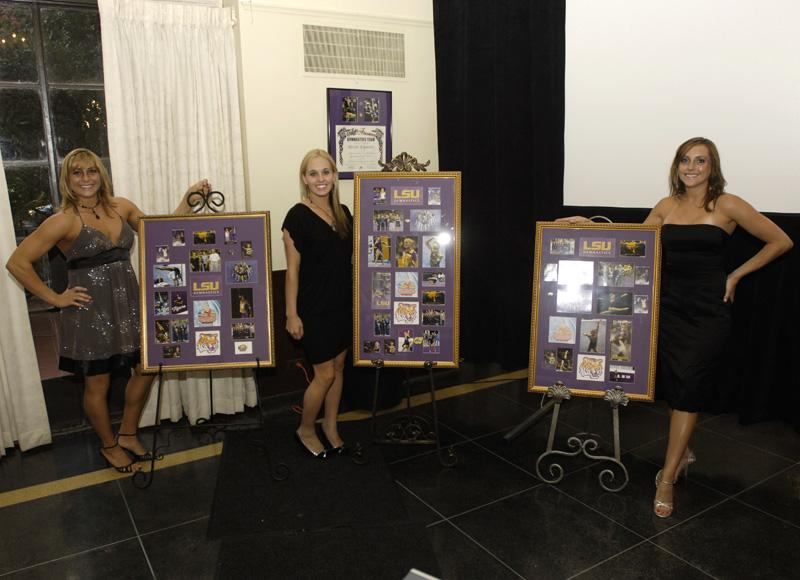 BATON ROUGE — In recognition of an outstanding 2007 season, the Tiger gymnastics team held its annual awards banquet Friday night at the Faculty Club on the LSU campus.

Members of the LSU Athletic Administration along with head coach D-D Breaux and staff were on hand to honor the team for their numerous accomplishments both on the floor of competition and in the classroom during the 2007 season.

Each team member was recognized for their individual contributions with letter awards. Freshmen were presented with a varsity letter jacket, sophomores received a blanket, juniors were given a watch and seniors Nicki Butler, Kelly Phelan and Lisa Rennie were awarded a plaque for their contributions over the past four seasons.

Several individuals were also acknowledged for their superior athletic endeavors throughout the year. Butler and Phelan along with Kristi Esposito and Susan Jackson were recognized for earning first-team All-America honors at the NCAA Championships. Lauren Klein and Ashleigh Clare-Kearney were honored as members of the All-SEC team. Clare-Kearney was also recognized for scoring a perfect 10.0 on the vault.

The coaching staff recognized two athletes with the season’s Most Improved Award and the DeeDee Fulmer Gilbert Award.

Clare-Kearney was named the team’s Most Improved athlete. After missing all but one meet of the 2006 season with a foot injury, Clare-Kearney returned to action in 2007 as the Tigers’ top all-arounder where she won a team-leading six all-around titles and 26 individual event crowns on the year. She went on to earn first-team all-conference honors and wrapped up the regular season with the No. 1 national ranking on the vault and in the all-around..

Phelan was the team’s recipient of the DeeDee Fulmer Gilbert Award, an honor bestowed upon the individual that best exemplifies the true meaning of a student-athlete, one who excels not only in competition, but also in the classroom.

In the competitive arena Phelan picked up the second and third All-America honors of her career, earning first-team distinction on the beam and floor. In the classroom, she was named an Academic All-American for the second straight season and graduated in May with her general studies degree.

Other team members were also honored for their academic achievements as well as their work in the community.

For there superior community service efforts the team was recognized as a whole with the CHAMPS Community Service Award. The award, given annually, goes to the LSU team that spends the most time giving back to the people of the Baton Rouge area. 2006-07 marked the third straight year the gymnastics team claimed the honor.

Individually, Phelan was recognized for spearheading the team’s community service efforts as she was named a Coca-Cola Community All-American and was selected to the SEC Community Service Team.