It's GameDay: Flynn Set to Return Against No. 12 USC 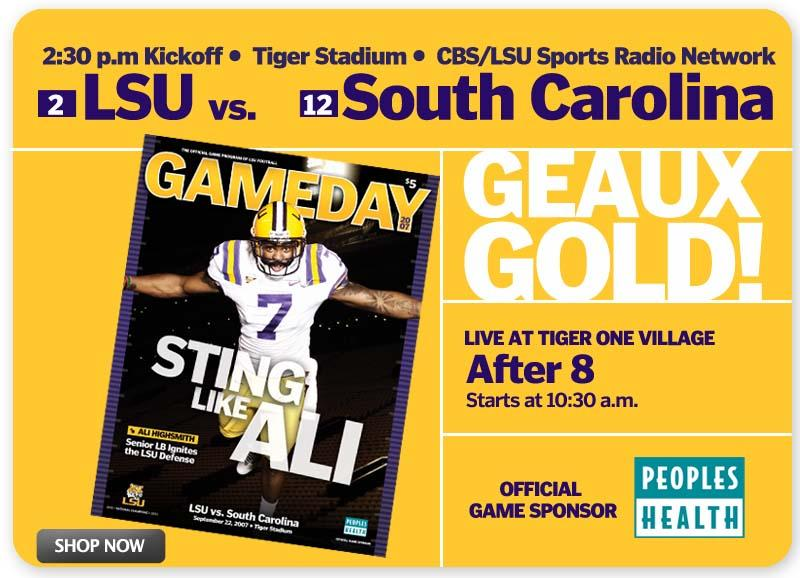 BATON ROUGE — Quarterback Matt Flynn is expected to return to the lineup today as second-ranked LSU goes after its first 4-0 start since the national championship season in 2003 when the Tigers host 12th-ranked South Carolina at 2:30 this afternoon in Tiger Stadium.

Today’s game is sold out and will be televised to a national audience by CBS. LSU brings a 3-0 overall mark and a 1-0 league record into the game following last week’s 44-0 win over Middle Tennessee, a game that the Tigers won despite playing without Flynn and wide receiver Early Doucet.

Members of the Geaux Zone on LSUsports.net can watch LIVE pregame video (ends at kickoff per SEC regulations) and listen to the entire game audio broadcast starting at 12:30 p.m. CT. Not a member? Join now.

South Carolina is also off to a 3-0 mark following its 38-3 victory over South Carolina State last week. The Gamecocks’ posted a signature win for the program in week two, beating nationally-ranked Georgia in Athens by a 16-12 count.

“We’ve had a good week of preparation and we’re excited about getting another chance to go out and play in Tiger Stadium in front of our fans,” LSU coach Les Miles said. “This will be a great test for our football team. South Carolina is off to a great start and they are playing very well.

“We are in a position where we have to improve and we must improve on a weekly basis. We have to continue to improve in all three areas ? offense, defense, and special teams. I think our team took that approach this week and practice now it’s up to going out and executing on game day.”

The Tigers got a big boost this week with the return of Flynn, who sat out last week with an injury. In two games this week, Flynn has shown that he has command of the Tigers, guiding an offense that scored 45 points against Mississippi State and 48 against Virginia Tech.

Thru two games, Flynn has completed 29 of 46 passes for 345 yards and a pair of scores, while rushing for 54 yards and one touchdown. When Flynn is not in the game, the Tigers turn to backup quarterback Ryan Perrilloux, who connected on 20 of 25 passes for 298 yards and three scores in Flynn’s absence last week against Middle Tennessee.

For the season, Perrilloux has connected on 27 of 33 passes for 403 yards, six touchdowns and one interception. He’s also been effective with his feet, rushing for 70 yards and a touchdown.

The Tigers continue to approach the ground game with a running back-by-committee approach with senior Jacob Hester and sophomore Keiland Williams leading the way. Hester leads the Tigers with 206 yards rushing and one touchdown, while Williams has 174 yards and a team-best four touchdowns.

“South Carolina brings a very physical and athletic defense into Tiger Stadium,” Miles said. “They have a nice scheme on defense and they are much improved from last year. They will play a variety of stunts and packages. They will be a great challenge to our offense.”

The LSU defense will have to brace for a Spurrier offense that is usually filled with a bag of tricks. However, unlike most years when Spurrier’s offenses have been pass happy, this year’s South Carolina team is relying more on its running game.

In three games this season, the Gamecocks have rushed for an average of 186 yards per game, while throwing for another 199 yards. Cory Byrd leads the Gamecocks in rushing with 255 yards and four scores, while quarterback Blake Mitchell has thrown for 321 yards and three scores.

“They are known for throwing the football, but the reality is they are running the football as productively and efficiently as they have ever run it,” Miles said. “They have two very talented running backs and they compliment the run game with a veteran quarterback in Blake Mitchell who is very talented.

“This will be a tough test for our defense. They are very dangerous and they are always just one snap away from busting a big play. Our defense will have to be ready to play.”

Through three games, the Tigers have allowed only seven points and they’ve held opponents out of the redzone in all but one possession. In addition, LSU’s held its three opponents to a combined 385 yards, which is the fewest yards allowed in school history over the first three games of a season.

“I think our defense has played really well over the first three weeks,” Miles said. “They are very talented and they understand the system and the scheme. They play fast and they get to the football. This will be a big challenge for us today.”

Individually, linebacker Ali Highsmith leads the Tigers with 21 tackles, while defensive tackle Glenn Dorsey has added 14 tackles, 3.5 tackles for losses and pair of sacks for the nation’s top rated defense.