GameDay Xtra: Highsmith Displays the Heart of a Champion 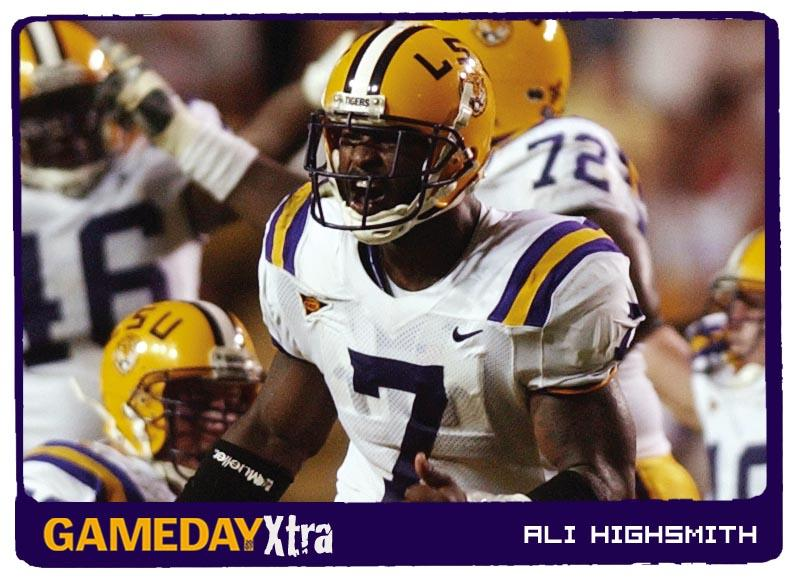 More than 30 years ago, Arlington Louis Dean jumped fearlessly into the ring to spar with Muhammad Ali down in Miami. Fast forward to the present, and Dean’s grandson ? Arlington Louis Highsmith – marches out fearlessly onto the field in Tiger Stadium to take on opposing teams.

“My father started calling me that, and I guess everybody just calls me that,” Highsmith said. “Even all the way from elementary school my teachers called me that.”

Just like the man after whom he is nicknamed, Highsmith has faced obstacles in his life that have made him stronger, tougher and more mature. One obstacle he overcame led to his arrival at LSU.

As a senior at Central High, Highsmith made a tough choice between the hometown University of Miami or LSU. Highsmith chose to stay close to home and play for the Hurricanes, but he was denied entrance into UM.

“It was hard at first, but as time went on I just looked at it as a stepping stone that I had to get over and improve myself and become a better person,” Highsmith said.

He looked to his parents as a source of strength and comfort, and they and the rest of Highsmith’s family lifted his spirits.

“My mother and father were always telling me, ?You can’t be down on yourself because things happen for a reason. You’re going to have your time’,” Highsmith said.

But that time was slow in coming. Highsmith sat out the fall of 2003, trying to figure out what was going to come his way. Whatever it was, Highsmith wanted to be ready.

“I kept working out and staying in shape,” Highsmith said. “I did my part so that when and if I was going to get that second chance I wasn’t going to be out of shape and not ready to go.”

That second chance did come. LSU told the star linebacker that it still wanted him, and without hesitation Highsmith packed his bags and headed for Baton Rouge. He overcame that setback, but in the process he moved away from his comfort zone ? his family.

Moving so far from home was a challenge for Highsmith. He was now living with roommates and taking care of himself, and his time at LSU has since matured him greatly.

“LSU has helped me to understand life being away from my parents and growing up on my own as far as responsibilities and taking care of myself. I’ve learned to be independent in situations,” Highsmith said.

The 6-foot-1 linebacker has also matured on the football field. Coming in as a freshman, Highsmith showcased outstanding speed, consistently running the 40-yard dash in 4.5 seconds. However, he needed to master the mental aspect of the game necessary to perform in a complex defense.

“I’ve enhanced my knowledge of the game a whole lot. When I first got here it was just go out and play.  Now I have learned to play assignment football,” Highsmith said. “I just go out there and take care of my job.”

Highsmith has grown into one of the leaders of LSU’s deep and talented defense. Displaying speed, athleticism and leadership along with his knowledge of the game, he has garnered the respect of his teammates. Out on the field in practice or in games, Highsmith has preferred to lead by example, but he is not afraid to be vocal, often calming a teammate who may lose his composure.

The senior has also helped incoming freshmen over the last few years, especially the out-of-state players. When they need someone to show them around and be that big brother who makes them feel welcomed, Highsmith is there.

“Whenever they need something I try to help them as best I can and help them through the transition of coming from high school to college and being on their own,” Highsmith said.

He’s more than willing to be there for his teammates because Highsmith experienced painful moments involving friends while growing up in Miami.

Tattooed on the deltoid muscle of his left arm are different images that keep Highsmith aware of where he came from, and those images carry special meaning. They represent friends who could not escape the type of lifestyle that Highsmith has worked hard to avoid.

“It’s an open casket, handcuffs and a sad face, which means ?I have come this far, so I just have to keep on pushing and don’t fall into the trap,’” Highsmith said.

Surrounding those images are the words “Against All Odds.” When people ask why he got that tattoo, he explains what he has seen and been through and how it has made him stronger.

“I got that tattoo because growing up I had friends who died or went to jail. I overcame that lifestyle and made it to be somebody,” Highsmith said.

He is somebody. He’s Arlington Louis Highsmith, but you can call him “Ali.”