Behind the Scenes: Facility Services 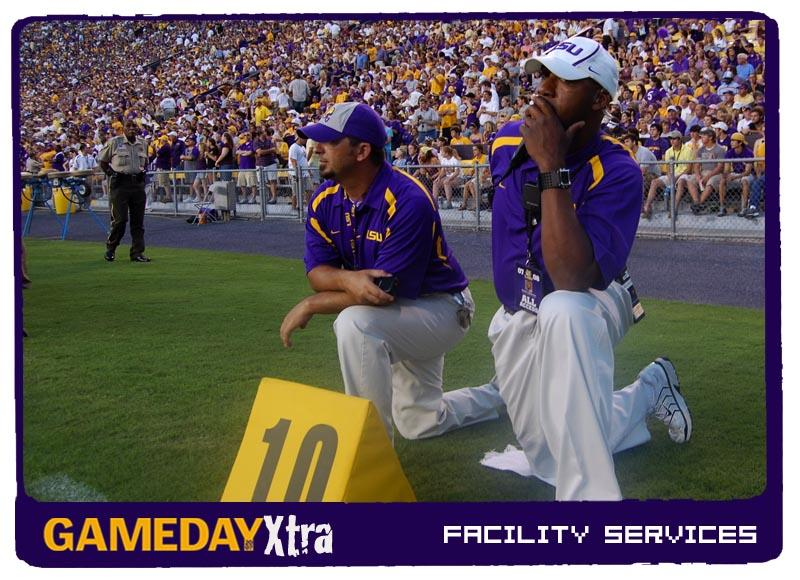 When LSU played Virginia Tech in front of a record crowd at Tiger Stadium, two light fixtures on the west side of the stadium weren’t working.

ESPN, along with the other various media outlets, didn’t notice. Ninety two thousand plus fans didn’t make mention of the situation. Even the players and coaches on each sideline seemed to think all was well.

Did anybody in Tiger Stadium on Sept. 8 recognize any malfunctions with the aforementioned lights?

“We do everything from checking the water quality at the Natatorium, to checking the lights at the ?Dub’, to dealing with the grass at Alex Box,” said Haliburton.

The ?we’ he mentions is the 45 plus people that work in his department. On Mondays during football season, Haliburton holds a staff meeting to discuss what went on during the previous weekend’s game.

“We sit down and talk about the good, the bad and the ugly from the past week,” explained Haliburton. “Were we on time with the setting up of the field? Did we get the painting done? Were the restrooms clean? Was everything correct?”

Correct — a word that Haliburton uses frequently when describing his preparations for the university’s athletic facilities. He takes great pride in what he does at LSU. After all, LSU athletics is what he calls home.

A four year letterman at tight end for the Tigers from 1986-89, Haliburton had a three-year stint in the NFL with the Denver Broncos. Unfortunately, his career came to an end when he was temporarily paralyzed by an opposing player while playing special teams. His story is eerily similar to that of Kevin Everett, the recently paralyzed tight end for the Buffalo Bills. Both suffered career ending injuries on special teams. Both played tight end at a major collegiate program. Both are from Port Arthur, Texas.

“The football fire was still in me,” said Haliburton. “But, it just didn’t work out. I got cut.”

What was the Denver Broncos loss is now LSU’s gain.

Haliburton returned to LSU in 1993 to finish his degree. Since then, he has held many positions at the university, from residential advisor to the manager of LSU’s facility maintenance department. When the opportunity arose to become the facilities manager for the athletic department, he jumped at the chance.

“It was a dream come true,” said Haliburton. It was an opportunity that many former student-athletes don’t get the chance to relish.

“I was told by a former athletic director that LSU can’t just hire every former student-athlete that comes through here,” explained Haliburton. “It really put things in a concrete perspective. That guy was right.”

“But that motivated me to show him that I could be a contributor to this department, to this institution, as much as I was when I was between the lines at Tiger Stadium.”

He hasn’t let up since.

In March, Haliburton was promoted to Assistant Athletic Director for Facility Services. His days are long and full of odd jobs.

“Hours don’t really matter,” said Haliburton. “It’s all about getting the job done. For every coach, we want to give them what they need to be successful. Whether it’s the height of the grass, the type of grass, or whether it’s setting up a coach’s office so they can conduct a good recruiting meeting or an effective meeting with their coaching staff. We tirelessly check these things day in and day out to make sure these are the things they do not have to worry about.”

While Haliburton brings his strong work ethic to the stadium everyday, there are some intangibles that make him one of the most important men in LSU athletics.

“He brings loyalty and commitment to the program,” said Verge Ausberry, senior associate athletic director and former teammate of Haliburton at LSU. “It’s important for him to see everything done correctly. He knows it’s a reflection of himself and a reflection of LSU. He always gives his best effort to get these places fixed up for all the athletic events.”

His co-workers echo the same sentiments.

“He’s a huge asset to the university, especially for the athletic department,” said Todd Jeansonne, Assistant Director of Athletic Facilities and Grounds and whom Haliburton described as his “right hand man.”

“He’s always there to give you the tools to succeed,” continued Jeansonne. “Whatever you need, he’s there for you. All you have to do is ask. He will always support you.”

At the beginning of the week following the Virginia Tech game, Haliburton met with some members of facility services, including LSU’s head of electrical engineering. They discussed how to go about repairing the lights that weren’t working for the previous game. After that meeting concluded, Haliburton met with a mechanic from Otis, the elevator company. A leaky air conditioner in one of the cars was the main topic of the conversation. He made some calls to set up times for contractors and other outside services to clean the bleachers, and he met with Jeansonne about how the rain would affect putting the paint on the field.

On game day, Haliburton will be roaming the stadium with two cell phones and two radios. Every problem called in, that is associated with the stadium, will be routed to one of his four communication devices. As he was throughout the week, he will be a busy man come Saturday night. Everything he does is for one reason.

“At least 90 percent of the fans in Tiger Stadium have a great experience on game day,” said Haliburton. “I can control that, and that is one of the most rewarding things about this job.”