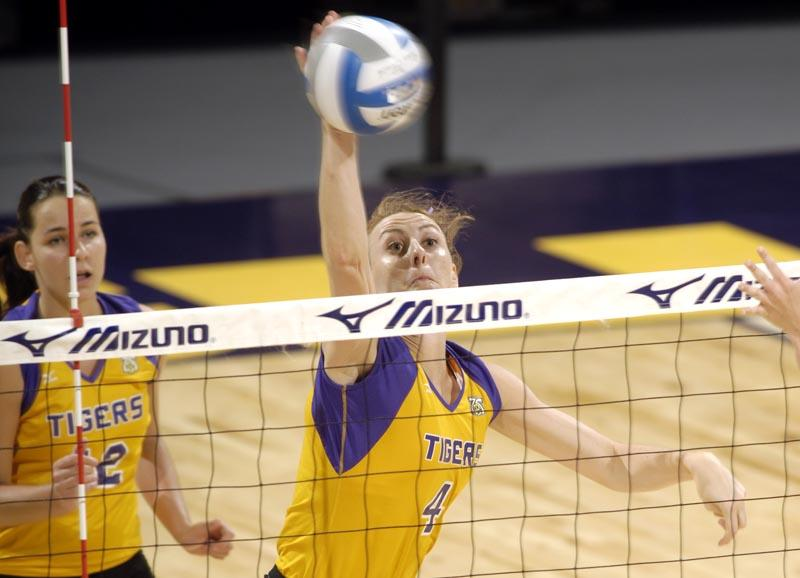 BATON ROUGE — After three weeks on the road, the 22nd-ranked LSU volleyball teams returns home to face South Carolina in a Southeastern Conference match on Friday at 7 p.m. for Pack Pete’s Seats in the Maravich Center where all fans wearing gold get in FREE.

The Tigers (10-1, 2-0 SEC) will attempt to break the volleyball attendance record at the match as LSU faces the Gamecocks (7-4, 0-2 SEC) in the gold game the day before the Tiger football teams takes on South Carolina in their gold game on Saturday. Over the last two years, the Tigers have more than doubled their average volleyball attendance and have recorded two of the top 10 attendance marks in school history. The school record attendance is an estimated 2,250 that attended LSU’s match against Kentucky in 1992.

In addition, it is the first of two student-point games this season where LSU students will earn points that can be utilized in the event of high demand ticket situations for athletics events including football away and postseason games. The first 200 fans to arrive against the Gamecocks will receive free LSU volleyball t-shirts. Barrels will also be set up to collect canned food as the kickoff of the “Together We CAN” SEC-wide food drive.

“We are excited to be back on our home court after being gone for several weeks,” said LSU head coach Fran Flory. “We know that South Carolina is a young team, but they are also a dangerous team. They are very athletic and very talented”

The Tigers enter the weekend having won four straight matches after losing their only match of the year to Iowa State in the Iowa Challenge. LSU swept Ole Miss to open league play before coming from a game down to defeat Arkansas last Sunday. The Gamecocks have lost two in a row to open conference play at home, falling in five games to Georgia before being swept by Georgia, after going 7-2 in pre-conference play.

“South Carolina started the season successfully,” said Flory, “and we know that they have some players that are very capable of putting up good numbers in the kill category. We will have to be very prepared and control our side of the net to be successfully.”

For the season, LSU and South Carolina are very closely matched statistically. The Gamecocks lead the Tigers with 15.7 kills per game, just ahead of LSU at 15.2. South Carolina also holds a slight advantage in hitting percentage, posting a .233 clip compared to a .224 mark for LSU. The Tigers lead the SEC with 2.31 service aces per game, while the Gamecocks average 1.84 aces per game.

Offensively, junior Kyna Washington leads LSU and ranks second in the conference with 4.46 kills per game. The two-time defending SEC Player of the Week, she recorded the second most kills in a three-game match with 24 against Ole Miss last week. In addition, she leads the league with 0.66 service aces per game and has recorded an ace in nine of the Tigers’ 11 matches this season, including seven matches with three or more aces.

Four additional Tigers are also averaging over two kills per game, including Lauren DeGirolamo with 3.36 kills per game, Brittnee Cooper at 2.47 and Marina Skender and Angela Bensend with 2.43 each.

Junior Elena Martinez leads the SEC with an amazing 6.02 digs per game. In her first season as the starting libero, Martinez broke the school five-game dig record with 34 against Iowa and the four-game dig record with 33 against Arkansas. She has posted eight 20-dig matches in 11 attempts this year, including six straight.

The overall series between LSU and South Carolina is tied at 11 wins each. After three meetings in the 70s and 80s, the pair began yearly play in 1991 when the Gamecocks joined the SEC. From 1991-95, the Tigers won five of the seven meetings. Beginning with the second meeting of the 1995 season, South Carolina won nine straight meetings before LSU knocked off the Gamecocks in the second meeting of 2003. Since that point, the Tigers have five straight over South Carolina.

LSU will remain at home on Sunday to host No. 6 Florida at 1 p.m. The match will be televised on Cox Sports Television in Baton Rouge on cable channel 37 as part of Florida’s Cox contract. The match marks LSU volleyball camp reunion day as all campers wearing their camp T-shirt get into the match for FREE. In addition, the first 200 fans will receive one of the popular “Gold Digger” T-shirts.