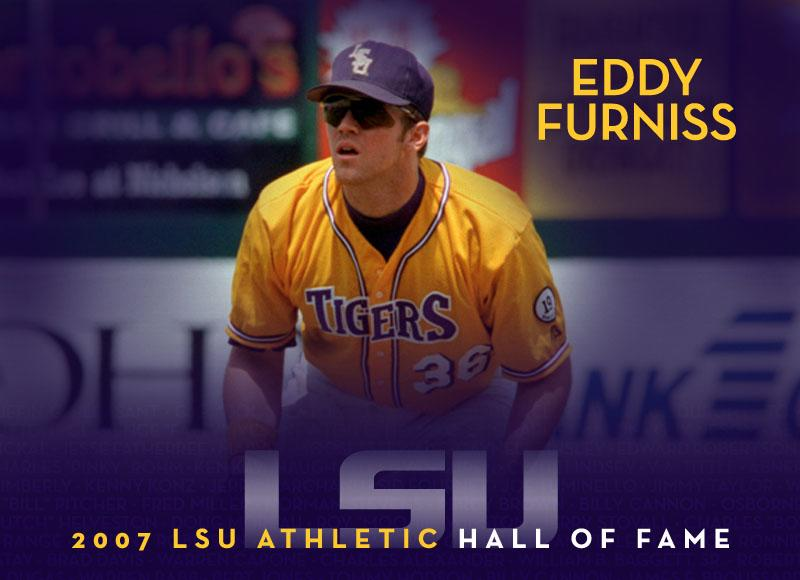 Editor’s Note: Fourth of five installments featuring the 2007 inductees to the LSU Athletic Hall of Fame.

Wilburn Edward “Eddy” Furniss III has learned how to act quickly and decisively under pressure. As a first-year resident at the John Peter Smith Family Medicine Program in Fort Worth, Texas, the former LSU All-America first baseman must effectively apply his instincts to save lives.

Thriving under adverse circumstances is a skill Furniss cultivated on the diamond of LSU’s Alex Box Stadium, where he developed into one of the best hitters in NCAA history. He says the experience of performing as a collegiate student-athlete has helped him succeed in his medical career.

“More than anything else, playing baseball at LSU taught me to perform under pressure, whatever the task may be,” Furniss explained. “If you can stand alone on the field with the hopes of 7,000 people in the stands ? along with countless people watching on TV and listening on the radio — riding on your next swing, catch, hit, or pitch, you know you can pretty much do anything. It really helped me react under pressure when, in the first 30 minutes of my residency, I was the only intern on the trauma surgery team and my pager went off with three trauma consults and a patient with a pulseless leg.”

The John Peter Smith program is the largest of its kind in the country, and it is widely considered one of the most rigorous training programs available. The program is geared toward doctors who are going to work in rural or underserved areas with few or no specialists available.

Accordingly, Furniss plans to move back to his hometown of Nacogdoches, Texas, and practice rural family medicine with his father, Dr. Ed Furniss.

Before he completes his residency, Furniss ? accompanied by his wife, Krystal, and their four-year-old son, Will IV — will return to Baton Rouge to be formally inducted on Sept. 25 into the LSU Athletic Hall of Fame. Joining Furniss in the Class of 2007 are football coaching legend Charles McClendon, women’s basketball standout Marie Ferdinand and football stars Kevin Mawae and Joseph “Nacho” Albergamo.

Coming back to Louisiana elicits pleasant memories for Furniss. An outstanding player and student at Nacogdoches High School, he received scholarship offers from several universities. However, once he visited Baton Rouge, Furniss focused upon LSU as his college of choice.

“Well, I visited Miami, Stanford, Texas, and, of course, LSU,” Furniss recalled. “The deciding factor for me was the people and the fans. Interestingly, we defeated Stanford and Miami in the College World Series during my time at LSU, so I had some good schools from which to choose. But I think it is obvious to anyone that the fan following at the other schools is probably not even a quarter of LSU’s. I found the support of the community and also the character of the players to be the most appealing of anywhere I visited.”

Furniss enrolled at LSU, and from 1995-98, he enjoyed one of the best four-season stretches in college baseball history. Though it has been nine years since his final collegiate game, Furniss is still the Southeastern Conference all-time leader in hits (352), home runs (80), RBI (308), doubles, (87) and total bases (689). In the NCAA record book, he finished his career No. 3 all-time in total bases, No. 4 in home runs and doubles, and No. 5 in RBI.

Furniss, a three-time Academic All-American as a zoology major, helped lead LSU to NCAA championships in 1996 and 1997, and he received the 1998 Dick Howser Trophy as college baseball’s most outstanding player. He hit .403 in ?98 with 27 doubles, three triples, 28 homers, 85 runs and 76 RBI, earning First-Team All-America and All-SEC honors. Furniss earned All-America recognition in each of his final three seasons, and he was voted the 1996 SEC Player of the Year.

He was selected in the fourth round of the 1998 Major League Draft by the Pittsburgh Pirates and played five seasons in the minor leagues before retiring to concentrate on a career in medicine.

Furniss credits his family — particularly his father — for inspiring him to work the long hours necessary to become one of college baseball’s all-time best hitters.

“My family was the reason I played baseball in the first place, especially my dad,” Furniss explained. “I’m sure that most dads are the ones who pushed their sons to work at whatever sport they end up playing. There are not many elementary school kids, and certainly not teenagers, that are self-motivated enough to practice every day in the summers. I would go so far as to say, without family support, I wouldn’t have lasted into college baseball, much less professional.”

The positive familial influence was enhanced after Furniss arrived at LSU by Skip Bertman, the legendary coach who guided the Tigers to five national championships in a 10-season period (1991-2000).

“I absolutely would not have been the baseball player I was without Coach Bertman drawing every ounce of ability out of me,” Furniss said. “I really think that is true for all the players that have been through the program under his coaching. He has a gift to know when he can push a player, when young men need a stern hand to get back on track, and the ones that need a kind word at the right moment to make it through a downturn.”

“No one in my tenure at LSU played as well as Eddy over a four-year period,” Bertman said. “He truly is one of the best LSU has ever produced. His batting average over four years was magnificent and, of course, he was one of the primary reasons we won back-to-back national championships (in 1996 and 1997). Eddy’s career was one of the greatest, not just in baseball, but in any sport in LSU history.”

Former LSU pitcher Doug Thompson, who earned the win in the 1997 national championship game, said Furniss competed at the highest level with class and dignity.

“Eddy Furniss is the guy that parents want their sons to be like and their daughters to marry,” Thompson said, “with a .400 batting average.”

Furniss cherishes the unforgettable moments that he and his teammates created as the Tigers captured the ’96 and ’97 College World Series titles. LSU won the ’96 championship game over Miami on a two-out, two-run ninth-inning homer by second baseman Warren Morris. That remarkable feat remains the only time in the 61-year history of the CWS that the national championship was decided by a walk-off home run.

Furniss believes that Morris’ celebrated swing epitomized the spirit of his teammates.

“I found that the character of the ?96 team was the most memorable,” he said. “We came from behind in an amazing number of games that year and were not expected to do as well as we did.  That year couldn’t have happened to a better group of people.”

The 1997 LSU squad dominated its opponents, winning 57 of its 70 games, including a 13-6 victory over Alabama in the CWS final.

“I think that team played with confidence that showed in everything we did,” Furniss said of the ’97 Tigers. “Not arrogance, but confidence that we were going to win every game we played.”

Just as he did in powering LSU to national championships, Furniss now displays confidence as a resident in a Fort Worth hospital, where he makes crucial, life-changing decisions every day.

The people of Nacogdoches are looking forward to having Dr. Wilburn Edward Furniss III practice medicine in their community.

“And teach Will Furniss IV how to hit,” laughs the LSU Hall of Famer.