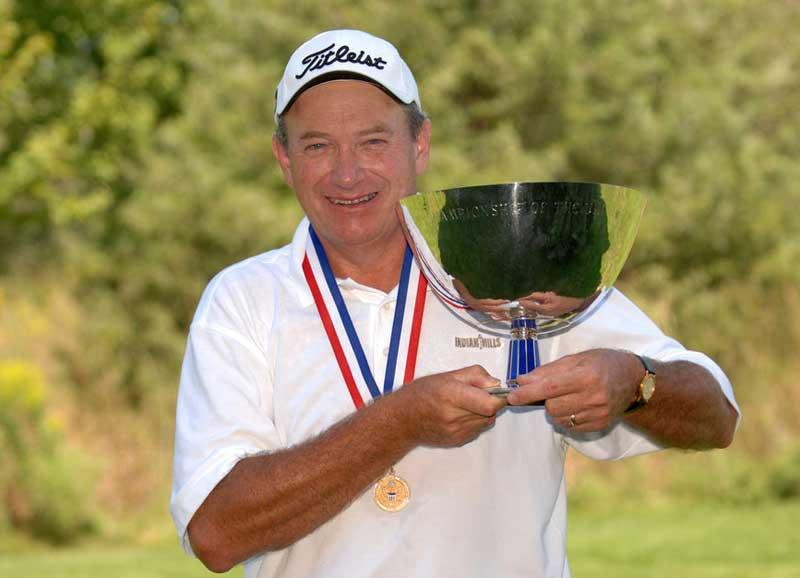 Lee, who at 55 years and five days surpassed the previous record of 55 years, three months and 18 days set by former U.S. Senior Amateur champion Bill Bosshard in 1991, defeated 60-year-old Sam Farlow of Birmingham, Ala., in the final match. Falrow played for the University of Alabama from 1965-70.

“I cannot believe it,” Lee said following his match on Sept. 13. “It’s a dream come true. I’m still kind of pinching myself to see if this is real or not. What an honor it is for me to win a USGA event. I’m just tickled to death with this win.”

In a match-up of former PGA Tour players, Lee took the early lead after Farlow three-putted the third hole and built his lead to 2-up when Farlow couldn’t get up and down from a greenside bunker on the fourth hole. Lee added to his lead by rolling in a 15-footer for birdie on the sixth and Farlow couldn’t match with a putt from 20 feet.

Farlow cut into the deficit with a 15-foot par putt on the seventh hole, but Lee got it right back by draining an incredible 60-foot birdie putt on the par-3 eighth hole.

“I knew when that putt went in that I would be hard to beat,” said Lee, who played on the PGA Tour from 1976-80. “I knew I was in good shape at that point, but I was still nervous.”

Farlow cut the deficit to 2-down again with a short birdie putt on the ninth hole, but Lee quickly responded by increasing his advantage to 3-up by holing a 10-footer for birdie on No. 10. Farlow again cut into Lee’s lead with a birdie at the 11th and had a great chance to get another hole back at No. 13 when he stood over a 4-foot par putt to win the hole.

But the putt slid by the right side of the hole, allowing Lee to maintain his 2-up advantage. Lee went 3-up once again when Farlow’s tee shot on the par-three 14th hole buried in the rough in front of the green and he failed to get the ball up and down.

The match ended one hole later when Farlow missed a 3-footer for par and then conceded Lee’s 3-foot birdie putt, giving Lee his first USGA title of his career.