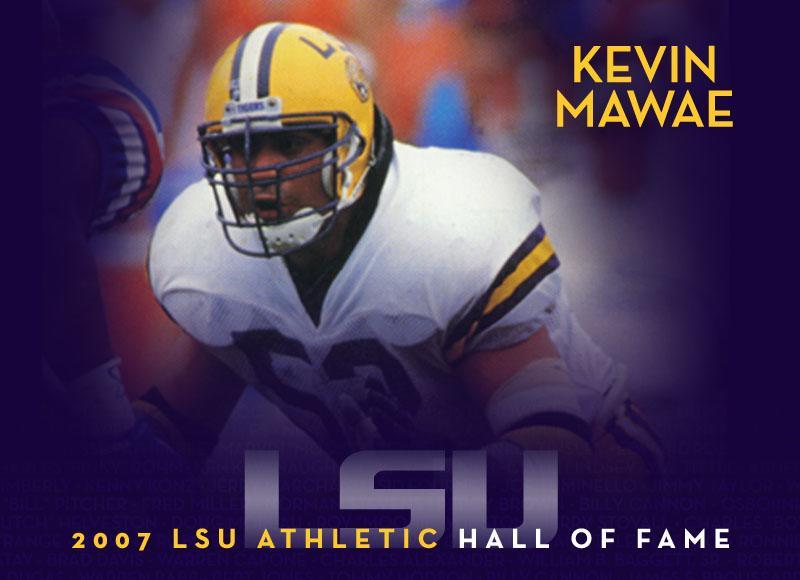 Editor’s Note: Third of five installments featuring the 2007 inductees to the LSU Athletic Hall of Fame.

In Kevin Mawae’s four seasons at LSU, the Tigers won only 17 games. Despite this adversity, Mawae established himself as one of the greatest offensive lineman in Southeastern Conference history. Since then, he has redefined his center position in the NFL, served as an active participant in the community and become a proud parent of two. His ability, character and commitment have led him back to LSU as a Hall of Fame inductee.

As an all-state lineman at Leesville High School, Mawae was sold on LSU even before he officially arrived on campus. He saw the Tigers open the 1988 season with a convincing 27-0 blanking of No. 10 Texas A&M in Tiger Stadium. Four weeks later, he was a member of the 79,431 faithful who saw Eddie Fuller, a former Leesville teammate, shake the earth on a game-winning touchdown catch versus fourth-ranked Auburn.

“Eddie was from Leesville, and he was a senior when I was a freshman there,” Mawae said. “To go there and see one of my former teammates win the game that day, I was sold. I knew that night after the Auburn game I was going to LSU.”

After being recruited by assistant coach Joe Wessel, Mawae made it official on January 11 in front of his parents and head coach. As an eight-year-old he envisioned this dream.

“I remember it like it was yesterday,” Mawae said. “My whole dream in life was to play in the NFL. Signing a scholarship to go to LSU was one step closer to that dream. I remember signing my letter and getting my first LSU hat.”

Mawae came to LSU when the Tigers were riding one of their most successful three-year stretches in school history. LSU had claimed SEC championships in 1986 and 1988, and the Tigers had reached 10 wins for only the third time in program history in 1987. Mawae hoped to perpetuate that success.

However, as a true freshman one year later, LSU suffered its worst season under head coach Mike Archer as the Tigers posted a 4-7 record. In 1990, Mawae saw the field for the first time and ended up starting seven games at left offensive tackle. He earned Freshman All-SEC recognition, but he endured another losing season in Archer’s final year.

Under Curley Hallman’s new regime, LSU managed only 12 wins in Mawae’s final three years. There were no bowl games and no SEC title rings.

“It was really frustrating,” Mawae said. “The deal was to keep your head up and go out and play and practice hard every week like you were playing a championship. So much about being a leader is what you do as opposed to what you say. When you do say something, you say it at the right time.”

His leadership did not go unnoticed. In a time where the program received little publicity, Mawae made the most out of little opportunity.

As a sophomore in 1991, he started all 11 games and was a consensus first team All-SEC selection while playing four different positions. In 1992, he received second team All-SEC honors at left tackle. By his senior season, Mawae moved to his natural position of center.

Mawae made starts at center, guard, tackle and tight end, and he earned starting nods in the final 39 games of his LSU career. His versatility, athleticism and leadership as one of the league’s premier linemen led him to third-team All-America honors after the 1993 season.

“I was undersized to play offensive line,” he said. “I matched up well with the speed and athleticism with some of the guys in the league. A lot of it was just determination and heart. I was fortunate that the coaches had the confidence in me that I could do all of them.”

Mawae achieved his NFL dream in the spring of 1994 when he became the second round draft choice (36th overall pick) of the Seattle Seahawks. During his first two NFL seasons, he made 37 starts at guard. By the beginning of his third year, he moved back to center and has since redefined the position over the last 14 years.

In 1998, Mawae was traded to the New York Jets, a move that propelled his career to new heights. From 1997-2005, he became a true ironman as a starter in 177 straight games while being named to six consecutive NFL Pro Bowls.

He played in seven postseason games with the Jets, earned respect from his peers and firmly established himself as one of the all-time great centers in pro football history.

Mawae’s leadership and credibility were visible to everyone around him. In 2003, he was selected to the NFL’s Diversity Committee. He has been serving on the NFL Players Association Executive Committee since 2002.

“If you play hard and work hard, you become a natural leader,” Mawae said. “Once you have proven yourself on the field, you give yourself a platform to be able to speak up in the locker room. Over the course of my 14 years in the NFL, I feel like I have earned the respect from the players around the league.”

Mawae will tell you his accomplishments on the field pale in comparison to what he has achieved as a family man and an active participant in the community. He credits his parents for having the biggest influence on him.

“My biggest influence was my mom and dad,” Mawae said. “I came from a great family, and we moved around the country and lived in Germany and Louisiana. They are the ones who encouraged me to play sports.”

Mawae recalled the summer of 1992 as a special one. That is when he proposed to his wife, Tracy Dale Hicks, at LSU Fan Day in front of 140 teammates, 10 coaches and 3,000 fans over the public address system.

“My teammates thought I was going to announce that I was going to come out after my junior year,” Mawae said. “But I got down on my knee and my wife and family were there, and I asked if she would marry me in front of all those people. She said yes. It is a memory where LSU was a part of it. That was our life at the time.”

Both Kevin and Tracy have been happily married ever since, and the couple has one son, Kirkland, 10, and one daughter, Abigail, 7. Together the Mawae’s have been inspiring and active participants at every place they have lived.

“You don’t ever need to forget where you came from,” Mawae said. “So much about being a professional athlete is giving back to the community and making yourself available whenever it is possible.”

Mawae served as spokesman for The David Center for Autism Research and co-founded several other projects in the New York area. In the aftermath of Hurricane Katrina, he organized a food and supplies drive to benefit Feed the Children.

He adopted the “Kevin Mawae First and Goal Challenge,” a program designed to raise money and make frequent visits to Winthrop University Hospital’s Child Life Program. Along with his countless hours of service to needy children, Mawae donated his services at Ground Zero in New York following the September 11 attacks.

Mawae and his family have aligned with more causes since being traded to Tennessee on March 14, 2006.

Mawae believed he would be inducted into the Pro Football Hall of Fame before being enshrined in the LSU Hall of Fame because of the Tigers’ lack of success. Last year, that was proven wrong when he received a congratulatory letter in his locker in Tennessee.

Mawae had been nominated by Kevin Winston, Jets’ Vice President of Player Development. Winston wrote, “I can state without reservation that in the eight years I have been in the NFL, Kevin Mawae is the most well rounded player and professional I have had the pleasure to work with in the NFL.”

“That was a humbling experience that someone did that for me,” Mawae said. It was a vindication for the five bad years of football that we had at LSU. It spoke volumes of what somebody thought about me for what I’ve done in the game of football and also for LSU in the years that I have left.”

A first ballot call to Canton should be in the near future as Mawae continues his excellence on and off the field. Those around him have always been positively affected by the way Mawae handles himself, even during his adverse days at LSU.

“When you come from five losing seasons, people tend to not pay attention while you were in school.”

People did … and deservedly so.