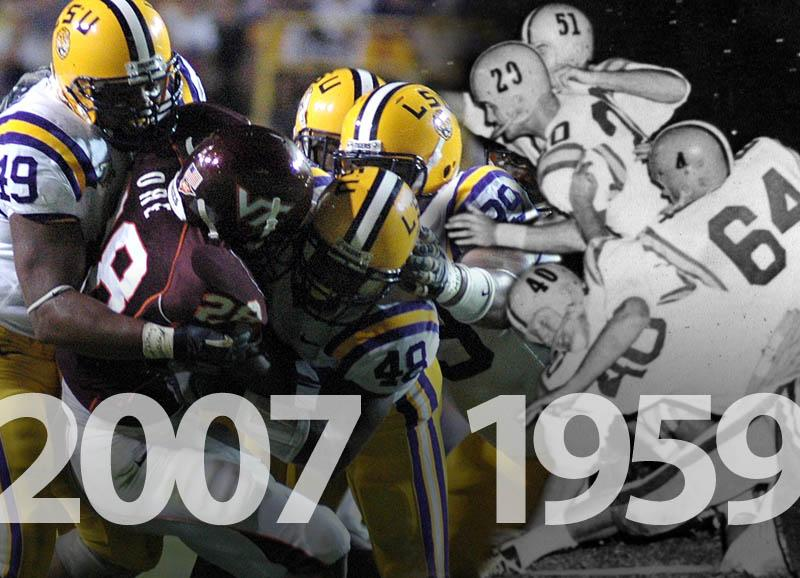 BATON ROUGE — Call them old school or a throw back unit to a time when 20 points won most college football games and putting up 300 yards of offense was nearly unheard of. This year’s LSU defense is reminding many who have watched the Tigers play throughout the years of the 1959 squad that to this day, is still considered the best group of defenders in school history.

Now, nearly 50 years later, this year’s LSU defense is putting up quite an argument as to who the best unit to ever wear the purple and gold may be. There is still a great deal of football to be played, but through the first three games of the season, this year’s Tiger defense has proven to be every bit as good as the 1959 unit.

“Our defense is playing dominant, dominant football,” LSU coach Les Miles said earlier this week. “They understand the calls. We are in year three now and they are very comfortable with the defensive calls and how to adjust to formation. This is a very talented defense.”

Indeed it is as LSU’s defense, behind the play of All-America defensive tackle Glenn Dorsey, a throw back in his own right, is putting up numbers not seen at the school since back in the 1950’s when the Tigers set most of the school records for opponent’s offensive futility that still stand today.

The 385 yards allowed by the Tigers this year is the fewest over the first three games of a season in school history. The next closest was the 407 yards allowed in 1959.

Other interesting comparisons between the two squads include that both teams pitched shutouts in two of its first three games; the 2007 squad has forced a total of nine turnovers, while the 1959 team had eight takeaways during that span; and in terms of first downs, this year’s team has surrendered only 29 compared to 28 by the 1959 team.

In addition to being stingy when it comes to yards and touchdowns, this year’s LSU defense has allowed an opposing offense to penetrate its redzone only one time. That came during the second week of the season when Virginia Tech went 65 yards on eight plays for a third quarter touchdown.

A quick look at the Southeastern Conference statistics shows that the next closest team in terms of redzone penetration is that of South Carolina and Georgia, who have each allowed its opposition eight trips inside the 20-yard line this year.

In addition, LSU’s 385 yards allowed is nearly 400 yards less than the team that ranks No. 2 in the SEC in total defense as Florida is allowing 260.3 yards per game for a total of 781 total yards allowed in three games this season.

“The start of this season is as good of a defensive start that I have been around,” Miles said. “When you are talking about great defenses, it will always be the defense that will be pressed into the memory of our opponents.

“At this point, I like where we are. I like how they practice and prepare. I like how our staff prepares. There is no reason to think those characteristics will change and will continue to be one of the best defenses I have been around.”

Individually, senior linebacker Ali Highsmith leads the Tigers with 21 tackles, while Dorsey has 14 tackles, 3.5 tackles for losses and a pair of sacks for the Tigers. Defensive back leads the SEC in sacks with three, while safety Craig Steltz is tops in the nation in interceptions with four to his credit.

In all, eight different players have recorded sacks for the Tigers, while another five players have registered either an interception or a fumble recovery for the unit.

LSU’s defense will be put to another test on Saturday when the second-ranked Tigers (3-0) host 12th-ranked South Carolina (3-0) at 2:30 p.m. in Tiger Stadium. The contest is being billed as the “Gold Game” and LSU fans are asked to wear gold the game, which will be nationally televised by CBS.