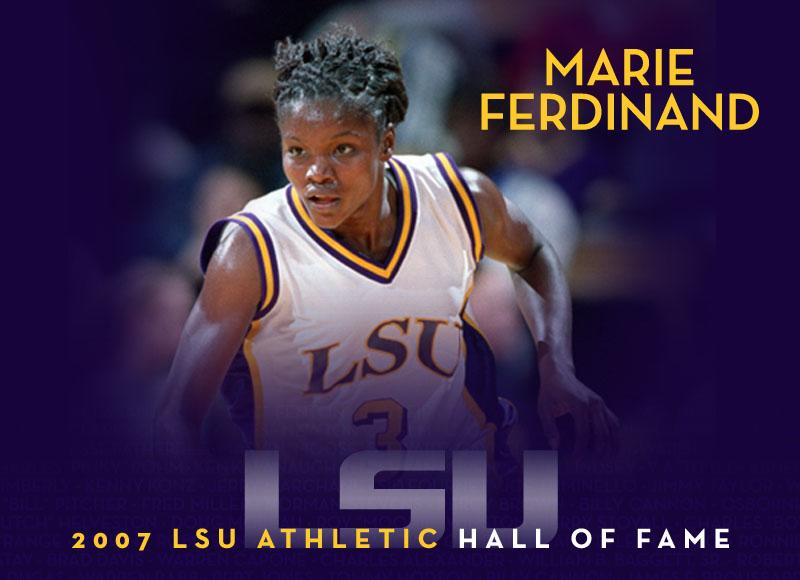 Editor’s Note: Second of five installments featuring the 2007 inductees to the LSU Athletic Hall of Fame.

Marie Ferdinand-Harris was the type of player who put her mark on the Lady Tigers basketball program during her four seasons in Baton Rouge, including her final game. The game was a NCAA Tournament second round match-up with eighth-ranked Purdue.

“I still remember that game like it was yesterday,” Ferdinand-Harris said. “It was one of my best games. Unfortunately we fell short, but at that point I was just trying to do what ever I could to help my team advance.”

The Miami, Fla., native scored a career and game-high 34 points on 10 of 17 shooting from the floor and 14 of 18 from the free throw line. Ferdinand-Harris also grabbed five rebounds and had two assists. The only problem was that LSU could not overcome the Boilermakers on their home court and fell, 73-70.

An era of Lady Tigers basketball came to an end in West Lafayette, Ind., that March 18th evening, but no one knew that a new era was about to begin for LSU’s women’s basketball program. Ferdinand-Harris had started something that would grow into one of the most elite programs in the country.

“I know we worked really hard to have the success that we’ve had,” Ferdinand-Harris said. “Had we not done what we did during my years, the program probably would not have escalated as much as it did.”

It was the success of Ferdinand-Harris that catapulted LSU women’s basketball into one of the nation’s top programs. The Lady Tigers have advanced to the last four NCAA Final Fours and won an average of 28 games each season since her departure.

“Past and present players all have something to do with the success the program is having,” added Ferdinand-Harris. “Sue Gunter did an awesome job of making sure this program continued to get better each year. I know every time I see LSU succeeding and doing well I am thankful because I know I am a part of that even though I am not there now.”

Flash back four years earlier to Ferdinand-Harris’s freshman season at LSU:  She came to LSU in 1997 as a shy kid from Edison High School in Miami, Fla., but was the best player in the state of Florida and scored over 2,000 points during her high school career.

“Marie could be one of the most athletically gifted players that we have had in a long time,” Hall of Fame coach Sue Gunter said about prior to Ferdinand-Harris, freshman season.

Gunter knew what she was talking about. Ferdinand-Harris became one of the greatest players in LSU history.

But, her career did not start out the way it ended. Ferdinand-Harris had suffered a knee injury as a senior in high school and was not able to perform to her expectations as a freshman at LSU.

“I did not have a speedy recovery like I thought I would have,” Ferdinand-Harris said about trying to return to the court after spending the summer rehabbing in Baton Rouge.

“That played a part in my freshman year,” she said.  “I did not play much. We had a great team and I just wanted to be able to contribute any way possible to help my team. It was frustrating, but I was fortunate to have good teammates and good coaches to help me through it.”

Ferdinand-Harris posted just 66 points as a freshman and did not score her first collegiate point until her third game. She collected three points in an overtime victory over Oklahoma State.

Heading into her sophomore campaign, Ferdinand-Harris was healthy and proved it to herself and her coaches by almost doubling her previous career-high with a 17-point performance in the season opener against Tulane. The game was also the first of 93 consecutive starts for the 5-foot-9 guard.

“I knew my potential and I knew how much I could give to the team,” She said. “I wanted to make sure I worked even harder than I ever worked to make sure my knee was 110%. I was ready to go both mentally and physically.”

Ferdinand-Harris went on to score 368 points, grab 157 rebounds and shot 46.3 percent from the floor as a sophomore in leading LSU to a 22-8 overall record and to a 10-4 mark in the Southeastern Conference, the first 10-win season in the program’s history. LSU also returned to the NCAA Tournament for the first time in two seasons. The Lady Tigers advanced to the Sweet 16 after wins over Evansville and an upset victory over No. 8 Notre Dame.

As a junior, Ferdinand-Harris was poised to top her individual performance and help the team reach even higher goals.

She did just that. LSU, behind 560 points, 148 rebounds, 170 assists and a 50.2 field goal percentage by Ferdinand-Harris, posted a 25-7 overall mark, won 11 SEC games and reached the Elite Eight in the NCAA Tournament before falling to eventual champion and top-ranked Connecticut.

“If we played any other team that year we would have gone further in the tournament,” Ferdinand-Harris said. “We ran into a really good team in UConn and we fell short of the Final Four and competing for the championship.”

Ferdinand-Harris garnered first-team All-SEC honors as a junior. She failed to reach double figures in just three of the 32 games during the season and posted at least 20 points 14 times, including a 22-point performance in a victory over No. 7 Duke to advance to the Elite Eight.

LSU and Ferdinand-Harris had started to make a name for themselves. Now, as she entered her senior season, the Lady Tigers were ready to make some noise on the national scene.

The Lady Tigers entered Ferdinand-Harris’s senior season ranked seventh in the nation and she was a preseason All-American.

There was no doubt that Ferdinand-Harris would not let anyone down, putting together her best season in the purple and gold.

She scored 654 points, grabbed 158 rebounds, dished out 107 assists and shot 51.2 percent from the floor. She also became the 19th player in school history to reach 1,000 career points, doing so in the first game of the season with 19 points in a win over New Mexico.

Behind Ferdinand-Harris, LSU once again returned to the NCAA Tournament and posted 20 wins for the third straight season.

The post season honors came pouring in as well. She became the Lady Tigers’ first Kodak All-American in 10 seasons, earned first-team All-SEC honors for a second straight year and was a finalist for the Naismith Player of the Year award.

“Being a Kodak All-American was a great honor, but it is through my hard work and the support of my family, my coaches and my teammates,” she said. “All of that mattered. When you work hard and have good people around you to support you it makes a difference.”

LSU averaged 21.5 wins in the four years with Ferdinand-Harris on the team. The Lady Tigers also advanced to the NCAA Tournament three times and posted back-to-back 10-win seasons in the Southeastern Conference.

Ferdinand-Harris capped off her collegiate career by being selected by the Utah Starzz as the eighth overall pick of the 2001 WNBA draft.

“It can take you a while to become an All-Star,” Ferdinand-Harris recalled. “I owe a lot of my success at Utah to Jennifer Azzi. She gave me great advice on how to keep in great shape and not to tire myself out with all of the traveling. She also helped me out on the court and made the transition easy for me.”

Ferdinand-Harris took that advice and has turned it into a career that has earned her three WNBA All-Star appearances.

She just completed her sixth season in the league and helped guide the franchise to its first playoff appearance since moving from Utah to San Antonio.

Ferdinand-Harris, who is married to former LSU baseball player Cedric Harris, has averaged 11.5 points, 3.2 rebounds and 2.1 assists in 180 games during her pro career that included taking the 2006 season off while pregnant with the couples’ son, Cedric Michael Harris, Jr.

“Having a family completes me,” Ferdinand-Harris said with great pride. “I can remember when basketball defined who I was at one point, but that is not me anymore. Now I am at the point where being married and having a baby, that has completed everything. I feel so blessed. I feel like I have it all right now and I thank God everyday.”

Complete with her career in professional basketball and a family, Ferdinand-Harris becomes a part of LSU history on September 25 when she gets inducted into the LSU Athletics Hall of Fame.