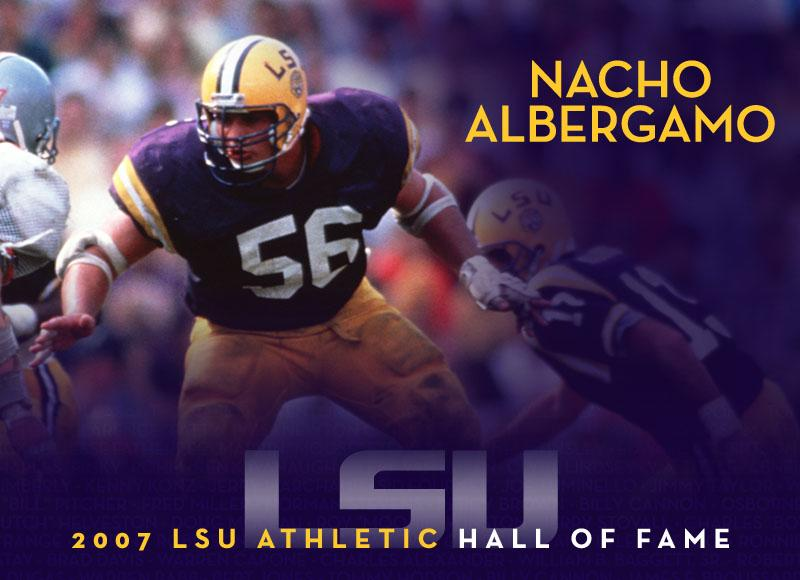 Editor’s Note: First of five installments featuring the 2007 inductees to the LSU Athletic Hall of Fame.

One look around Dr. Joseph Albergamo’s office and it is easy to see two lives combined. Degrees from college and medical school hang on the wall to the right of the man formerly known as “Nacho” Albergamo. On the wall behind the former football All-American hangs pictures and plaques from his playing days at LSU. Both walls serve as reminders of the major achievements Albergamo has accomplished in his recent past.

Those achievements have led to his election into the LSU Athletic Hall of Fame, an honor Albergamo does not take lightly.

“It is truly an honor that I’m proud of,” Albergamo said. “At the same time, I’m humbled because I know that this acknowledgment is also a result of my teammates and many other people who have contributed to this accomplishment and not just what I’ve done.”

Albergamo will be inducted into the Hall at the LSU Athletic Hall of Fame Gala, to be held September 25 at the Pete Maravich Assembly Center.  Also being inducted on that night will be Lady Tiger basketball star Marie Ferdinand, All-American baseball player Eddy Furniss, All-SEC football center Kevin Mawae and legendary head football coach Charles McClendon.

The list of Albergamo’s achievements is long, both on the field as well as off. At the end of his football career at LSU the Marrero, La. native was named three-time Academic All-SEC, two-time Academic All-American, as well as being named a consensus first team All-American at center his senior season in 1987. In addition, Albergamo was one of only 11 athletes named a National Football Foundation Scholar-Athlete his senior season.

Growing up it was Albergamo’s parents who influenced him to work hard and instilled the discipline he needed to achieve such numerous honors and distinctions.

“It all starts at home. It all starts with the family,” Albergamo said. “I grew up in a real strict household. My parents have probably been the most influential people in my life.”

Former LSU assistant coach Pete Jenkins also influenced Albergamo. Jenkins saw the talent and the character of Albergamo and made a decision that helped shape the course of Albergamo’s life.

“I credit him for having the confidence in my abilities to offer me a scholarship,” Albergamo said.

Once he enrolled at LSU as a freshman in 1984, Albergamo stepped up and exceeded the challenge of being both a student and an athlete.

“I was very disciplined. I worked a full day at everything,” Albergamo said. “There are only so many hours in the day, so when I wasn’t preparing or practicing for football I was studying.”

Excelling on the field and in the classroom had its price. Albergamo put in long hours practicing for games and studying for exams, so he did not spend much time going out with friends.

“I wasn’t much of a partier. I was very focused on what I wanted to do and what I liked to do,” Albergamo said.

One of those things he liked to do was play football, and through his hard work he had ample opportunities in his career to play. Albergamo started at center from his sophomore season until he graduated and lettered all four years.

During his time on the field Albergamo experienced many thrills, including leading LSU to its first SEC championship in 16 years when his Tigers won the league in 1986. One of Albergamo’s fondest memories as a Tiger occurred that same year in 1986 which was his junior season.

“One game that stands out that year would be when we played Alabama at their home field in Birmingham,” Albergamo said. “We had to come from behind to win the game, and it actually propelled us on to win the SEC championship.”

Not only did Albergamo experience incredible team moments while at LSU, but he also had some amazing battles in the trenches of the o-line. None stood out more than the epic matchup with Nebraska’s defensive tackle Neil Smith. Both ended up first team All-Americans a year later, but the battle between the two in the 1987 Sugar Bowl was something Albergamo has never forgotten.

“The reason it stands out is there was so much hype about us going against each other before the actual game. On the field I think there was an equally fierce battle, so that one thing stands out,” Albergamo said.

Nebraska came out on top 30-15 in what was the 10th Sugar Bowl appearance for the Tigers.

“It was healthy competition. After the game we met at the 50-yard line and shook hands, both in admiration of each other and how hard we played against each other,” Albergamo said. Then with a wry smile he added, “We lost the game, but I won the personal battle.”

Albergamo ended his football career on a high note when LSU blasted eighth-ranked South Carolina 30-13 in the 1987 Gator Bowl. From there Albergamo moved on to his life after football, a pursuit of a medical career. As he worked toward his goal of becoming a physician Albergamo carried on lessons he learned from football.

With the discipline he learned from his parents and the lessons he picked up in football Albergamo attended the LSU School of Medicine in New Orleans. Four years later he graduated and began an internal medicine internship with Ochsner Foundation Hospital in Jefferson, La.

Albergamo spent one year in his internship before he moved up to anesthesiology residency with the same hospital. One year later he transferred to Earl K. Long Memorial Hospital in Baton Rouge to begin an internal medicine residency. Albergamo stayed two years before he left to work full time at the Baton Rouge Clinic practicing internal medicine almost ten years after his last football game in 1987.

Internal medicine for Albergamo runs the gamut in adult medicine, everything from chest pains and infections to psychiatric problems, depression and even cancer. The pressure Albergamo faced every Saturday wearing the purple and gold prepared him for his life as a physician.

“There was pressure playing football in college, but I didn’t ever feel overwhelmed by any type of pressure playing center. I don’t think you could compare the amount of pressure there is in sports with medicine because in medicine there is much more,” Albergamo said. “We were playing a game, and whether you win or lose it’s not life or death. In medicine, it is.”

Every day presents new challenges for Albergamo, and every day he rises to meet them. It’s been like that since his football days where as “Nacho,” a 6-foot-2, 257 pound rock-solid lineman he worked his way into a consensus All-American.