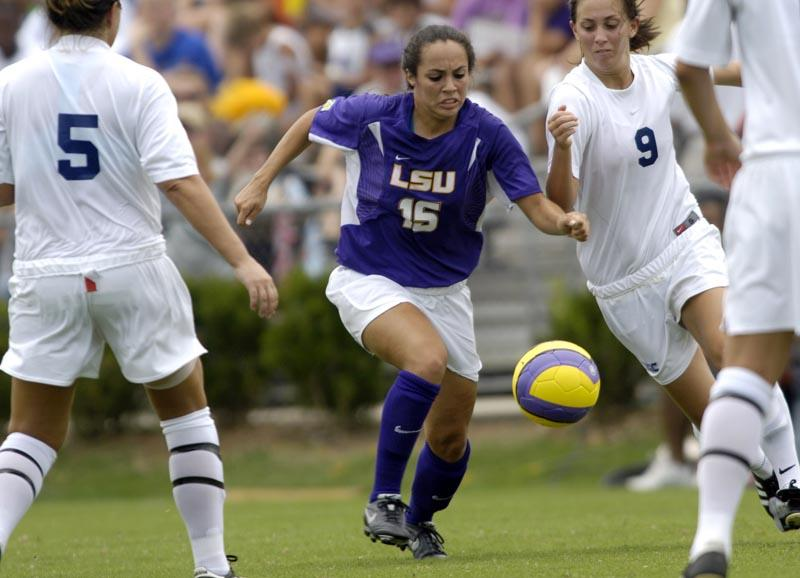 HOUSTON — The LSU soccer team kept the offensive pressure on the Houston defense throughout the match by attempting a total of 32 shots but was unable to find the back of the net as the sides battled to a 0-0 draw at Robertson Stadium on Sunday.

The Tigers (5-0-1) remain unbeaten on the year as they match their best start in program history while they extend their overall unbeaten streak to eight games dating back to last season. Houston (3-0-1) also remains unbeaten and is off to its fastest start in team history.

“Full credit goes to Houston for the defensive effort they showed today,” said LSU head coach Brian Lee. “We were credited with 32 shots for the match but most came from well outside the box. We just didn’t give ourselves very many quality chances to put the ball into the net. That’s a testament to the way they played when we got into the attacking third.”

Sophomore Malorie Rutledge created perhaps the Tigers’ best chances to score in the match as she missed putting the side on top just three minutes in by controlling a loose ball at the top of the box and firing a strike off the crossbar and out of play.

She also misfired on a golden opportunity in the 85th minute after dribbling past two Houston defenders and ripping a shot high from eight yards out in a one-on-one situation with Houston goalkeeper Shelby Scott. Rutledge finished the match with five shots and one shot on goal.

Sophomore Rachel Yepez finished the match with a team-high eight shots and four shots on goal, while fellow sophomore Michelle Makasini fired five shots with two on goal on the afternoon. Senior goalkeeper Valerie Vogler recorded her second straight clean sheet and fourth of the year.

The Tigers were unable to capitalize on their chances to score despite hitting 11 shots on frame and dominating the match with 10 corner kicks in 110 minutes of play. The Cougars were only able to muster three shots with two shots on goal and did not attempt a corner kick in the match.

The unbeaten Tigers return to the pitch on Tuesday when they travel to Austin, Texas, to take on the sixth-ranked Texas Longhorns in a match scheduled for 7 p.m. at Mike A. Myers Stadium. They will then head to Mt. Pleasant, S.C., to take on the College of Charleston on Friday at 6:30 p.m. CDT and Davidson on Sunday at 11 a.m.

“Tuesday will be a great test of our character when we face Texas,” Lee said. “They’ve proven to be one of the premier programs in the country and were a No. 1 seed in the NCAA Tournament a year ago. We’re going to have to bring our best effort when we kick it off Tuesday night.”