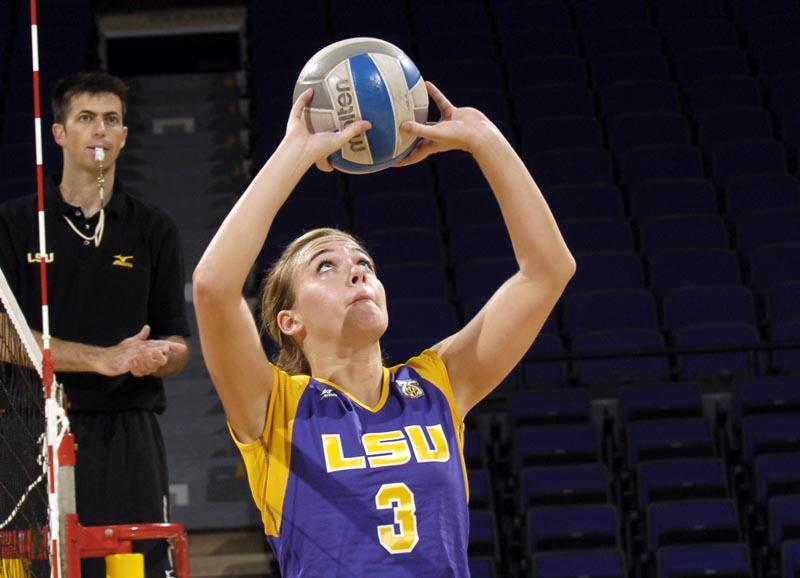 With the win, the Tigers improved to 10-1 on the season and 2-0 in league action, having won their final four matches. The loss dropped the Lady Razorbacks to 6-6 on the year and 0-2 in conference play. For the first time in school history, LSU has won four straight over Arkansas, including back-to-back wins in Fayetteville.

“We know that this match is the toughest we have on the road in the West ? this one and Arkansas,” said LSU head coach Fran Flory. “We know these have been the toughest matches over the years. We came in a little uptight about this match instead of aggressively looking forward to it.”

In the second straight match, junior libero Elena Martinez broke the school record for digs in a match, posting 33 digs in the four-game frame. The New Orleans native broke Luciana Reis’ previous record of 31 digs against Kansas in 1993. It also marked the third match of the season for Martinez to post 30 digs, also surpassing Reis’ school record of two in 1993. Martinez now has three of the top six dig totals in LSU volleyball history.

With 67 assists, Maggie Lonergan recorded her second 60-dig mark of the year. In addition, it tied for the 10th most assists in a four-game match in school history, tying former All-American Daniela Reis against Long Beach State in 1991.

Although neither team hit efficiently, with LSU recording a .188 clip and Arkansas at .144, the Tigers did out kill the Lady’Backs, 71-55. LSU rallied back to lead the match with 11.0 blocks after recording only two through the first two games. Arkansas finished with 10.0 blocks, failing to record a block in the final frame. The pair tied with 77 digs each, while the Tigers posted 10 aces, compared to nine for the Lady’Backs.

In the first game, the pair were evenly match through the early going, with seven tied scores leading to a 10-10 draw. Arkansas then went on a 5-1 run that put the Lady’Backs ahead for good, 15-11. Strong serving by Arkansas took LSU out of its offense as the Tigers struggled to find a rhythm. LSU got it as close as two, 21-19, but could get over the hump as Arkansas scored three straight to put the game away for good, 24-19, before eventually take game one, 30-24.

“We were actually playing too hard,” said Flory of LSU’s first game, “We were trying to be too good and too precise. We just had to settle in and find ourselves. WE decided that pushing wasn’t going to work so we talked about relaxing and playing within ourselves, not trying to be better than we needed to be but better each contact. I think that our mentality finally changed and we finally settled down.

The Lady’Backs used a 6-0 run early in the second game to break a 3-3 tie and take a 9-3 lead. The Tigers chipped away at the lead, but could not get close than three until DeGirolamo came in to serve with LSU trailing 19-15. On her serve, LSU scored seven straight points to tie it up and take the lead, 22-19. The Tigers stretched the lead to seven, 27-20, but Arkansas used three-straight blocks as part of a five-point run to get within one, 28-27.

LSU served for its first game point, 29-27, but a kill by the Lady’Backs and an attacking error by DeGirolamo tied it up at 29 all. After a timeout by the Tigers, LSU posted back-to-back kills by DeGirolamo and Skender to even the match at one game each, 31-29.

“We are kind of a streaky team right now in that we give up runs and get runs,” said Flory. “We showed toughness, but Arkansas created the streaks in their favor. We made a couple of adjustments with our defense that helped us with our blocking and we got a better rhythm in our offense. We really struggled the whole time. When we would hit a streak, it would be when we got our offense into sync with our first ball contact. Arkansas would then take us out of it and we had a hard time regaining it. Credit Arkansas for taking us out of what we wanted to do.”

In much the same way as game two, the Tigers let an early run by Arkansas put the Lady’Backs ahead, 12-7. With LSU trailing, 16-12, the Tigers scored five of the next six points to tie it up at 17 all. The pair traded points with no team gaining more than a two-point advantage the rest of the way.

With the game tied at 28, an Arkansas error gave LSU its first of three game points before the Lady’Backs tied it up. After holding game point again at 30-29, Arkansas scored two-straight, including an ace, to give the Lady’Backs their first game point. After a two more game points for Arkansas, 32-31, and 33-32, the Tigers scored three-straight point, ending with an ace by Martinez to put LSU ahead in the match, 35-33. The 35 points scored tied for the fifth most points scored by the Tigers in a single game in school history.

After back-to-back extra-point games, LSU came out and earned the match win with its largest win of the contest. The pair remained very close through 20 points, with neither team gaining more than a two-point advantage. The Tigers were finally able to pull away for good as LSU went on a five-point run, stretching from a one-point advantage to a six-point lead. An ace by Skender on game point ended the game, 30-24.

For the first time in a month, the Tigers return home next weekend to take on South Carolina and No. 6 Florida. LSU will face the Gamecocks on Friday at 7 p.m. and all fans wearing gold will get into the match for FREE. Sunday’s match against the Gators is scheduled for 1 p.m. and will be televised by Cox Sports Television on Baton Rouge cable channel 37.