Soccer Takes Unbeaten Streak on the Road to Houston 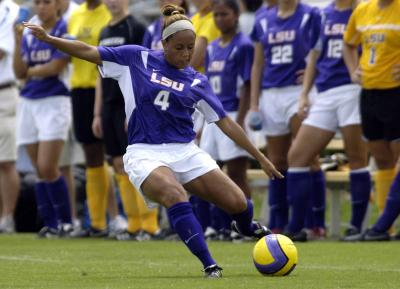 BATON ROUGE — The regionally-ranked LSU soccer team is off to its best start in four years and is looking to extend its unbeaten streak to eight games when it travels to Houston on Sunday to take on the Houston Cougars in a match scheduled for noon.

The Tigers (5-0-0) shut out in-state rival McNeese State on Friday by the score of 5-0 in front of a new record crowd of 2,160 at the LSU Soccer Complex, while the Cougars (3-0-0) are unbeaten under first-year head coach Susan Bush after pitching a 1-0 shutout of Grambling on Friday.

The sides squared off a year ago in the first ever meeting between the two schools on the soccer field as the Tigers dominated the Cougars by the score of 6-1 in Baton Rouge on Sept. 3, 2006.

“Getting into the state of Texas is really important for us because we’ve got a number of kids on the team who are from Texas. So, they’re going to be excited to play in their home state,” said LSU head coach Brian Lee. “Houston comes in unbeaten, and Susan (Bush) is off to a great start as a head coach. This will be a good first true road test of the season for us.”

Sophomore forward Rachel Yepez continues to add fuel to LSU’s offensive firepower as she scored a pair of first-half goals just 41 seconds apart against McNeese State, and she is currently the top goal scorer in the Southeastern Conference with six through five games.

The Tigers also boast the SEC’s assist leader as sophomore Malorie Rutledge has already equaled last season’s team-high with seven on the year, including two against McNeese State. Freshman Taryne Boudreau follows closely behind with six assists on the season after tying an LSU single-game record with three against the Cowgirls on Friday night.

LSU is perhaps the SEC’s most balanced team on the offensive end of the field as the squad has had seven different goal scorers this year with nine different players scoring at least one point.

“We like the balance that we’ve shown in the attacking third so far this season, and that’s something that needs to continue if we hope to make a run once the conference season starts,” Lee said. “We feel like we’ve recruited a number of creative, attacking players who all have the ability to score goals. That’s difficult for other teams to prepare for.”

Live streaming video of Sunday’s match can be found online at uhcougars.com. Following their match against Houston, the Tigers will stay in the state of Texas as they travel to Austin on Tuesday to take on the sixth-ranked Texas Longhorns in a match scheduled for 7 p.m.