Soccer Shuts Out McNeese, 5-0, in Front of Record Crowd 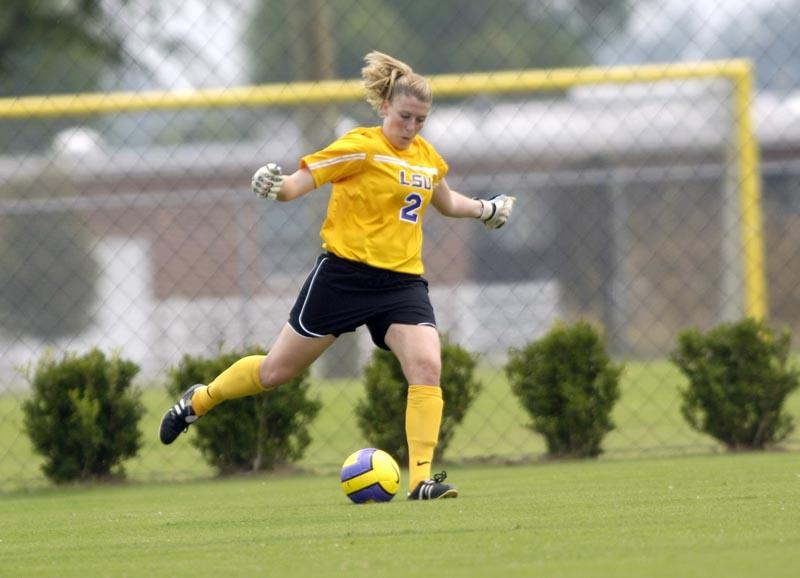 BATON ROUGE ? Sophomore forward Rachel Yepez scored a pair of first-half goals just 41 seconds apart to power LSU’s offensive attack Friday night and lead the side to a 5-0 shutout of McNeese State in front of a new record crowd at the LSU Soccer Complex.

Yepez put the Tigers on top by the score of 1-0 at the 22:23 mark of the first half after collecting a through ball off the foot of freshman Taryne Boudreau and beating McNeese State goalkeeper Shelby Money one-on-one on a breakaway with a shot at the top of the six-yard box.

She followed with her second goal of the match just 41 seconds later at the 23:04 mark by taking a pass from fellow sophomore Malorie Rutledge and ripping shot past a diving Money from near the top of the six-yard box. Boudreau was also credited with an assist on the goal.

Yepez, who finished with a team-high six shots on the night, continues to show great form on the offensive end through five games as she is the top goal scorer in the SEC with six on the season.

“I built a lot of confidence by the way I played last week, and we’re just playing with a lot of confidence as a team right now,” Yepez said. “I’m just trying to play it simple and trust the girls that are out there with me. It was also good that we finished the game strong. Being relentless is one of our team mottos and we played that way tonight.”

Boudreau tied an LSU single-game record with three assists on the night as she connected with sophomore Veronica Godbolt on a corner kick in the 75th minute to push the lead to 3-0. Godbolt punched a header inside the far post that Money appeared to save, but the linesman ruled that the ball crossed the plane of the goal line.

Junior all-conference forward Roslyn Jones added her fourth goal of the season just 25 seconds later with a blast into the back of the net from 10 yards out, while Rutledge converted a penalty kick in the 78th minute for the winning margin of 5-0.

Senior goalkeeper Valerie Vogler finished with a clean sheet for the night as she kept McNeese State off the scoreboard to earn her third shutout of the season and ninth of her LSU career.

“We got off to a bit of a slow start in the game, but overall it was a good night,” said LSU head coach Brian Lee. “Veronica and Melissa (Clarke) came off the bench for us and seemed to settle the team down, and the last 70 minutes were really well played by our club.

“It’s good over the course of the season to have some methodical wins like we had tonight, and we just seemed to wear McNeese State out a little in the second half. It was also important for us to sub in a lot of kids, and they responded by keeping the pressure on in the final 20 minutes.”

The Tigers pushed their unbeaten streak to seven games in front of a new record crowd of 2,160 fans, eclipsing the previous mark of 1,868 that witnessed the Tigers dominate Southern Miss on opening night by the score of 3-0. LSU ties a team record for wins to start a season and is riding its third-longest unbeaten streak in the program’s 13-year history.

“Our fans were tremendous once again and really gave our team a spark after we got off to a slow start in the match,” Lee said. “It’s a great experience for our kids to play and compete in a college soccer atmosphere like this, and we look forward to setting many more records in the future.”

The Tigers look to extend their unbeaten streak Sunday as they travel to Houston for their first true road test of the season against the Houston Cougars at noon, while they follow with a tough match against the sixth-ranked Texas Longhorns on Tuesday at 7 p.m. in Austin, Texas.