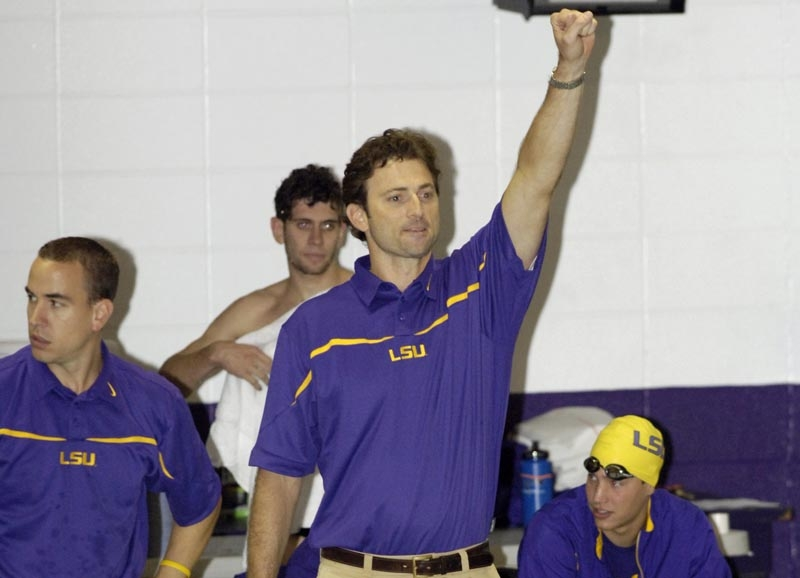 BATON ROUGE — In a thrilling season-opening meet that came down to the final event, the LSU men’s swimming team gave No. 2 Stanford all it could handle on Friday, but the Cardinal responded with a first-place finish in the 200 freestyle relay to edge the Tigers, 139-123, at the LSU Natatorium.

LSU won seven of the 14 events and held the lead early in the meet. Stanford, the 2007 NCAA runner-up, took a 126-119 advantage into the 200 free relay, and the Tigers needed a 1-2 or a 1-3 finish in the event to pull one of the greatest upsets in the history of the program.

The Cardinal took first (1:23.47) and third (1:26.51) in the relay to claim 13 points toward its winning margin. LSU’s group of senior Miko Malberg, junior Christoph Lubenau, freshman Hannes Heyl and junior Julius Gloeckner touched the wall in second place at 1:23.60.

LSU head coach Adam Schmitt said he was proud of the way the team competed and took one of the nation’s premier programs down to the wire.

“You have to be satisfied taking it down to the final relay against the No. 2 team in the nation,” said Schmitt. “It is so early in the season and we are in heavy training mode. Both teams wanted to see what they have. We learned a lot about our team today for future meets.”

Schmitt emphasized that the team’s hard work, perseverance and training has helped the program to be able to compete against teams the caliber of Stanford and therefore be recognized by other programs nationally.

“It’s all a process,” said Schmitt. “We want to get the glory and respect back to the program. The rest of the country now knows and sees LSU is for real. We are on a roll and hope to keep it going.”

Leading the way Friday was Gloeckner, who picked up where he left off last season with two individual wins. The three-time All-American won the 200 free (1:40.83) and then spearheaded a 1-3-4 LSU finish in the 400 IM with a time of 4:01.88. His solid clocking was over two seconds better than that of second place recorded by Stanford’s Nate Cass (4:03.96).

Freshmen Luis Gonzalez and Clint Hallum needed little time to prove their potential by sweeping both distance free events. Gonzalez won the 500 free (4:38.33) and captured the 1000 free (9:29.34) in his first official collegiate events.

“Luis was highly recruited out of Mexico,” said Schmitt. “We knew he would make an impact coming in and hopefully at SEC (Championships) and NCAA (Championships).”

LSU plays host to the annual Purple and Gold Intrasquad next Friday, Sept. 21 at 3 p.m. in the LSU Natatorium. The divers and women’s team get their first shot at competition. Admission is free.