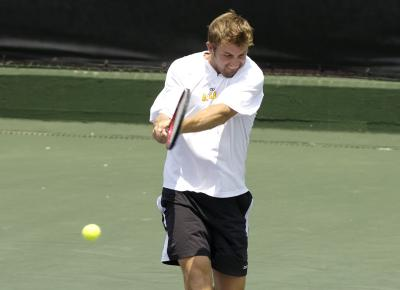 HOUSTON — The LSU men’s tennis team had a strong showing in its first action of the season at the Courtyard by Marriott/Rice Invitational Friday at the Jake Hess Tennis Stadium.

The Tigers won two of their four singles matches and took both of their doubles matches.

Freshman Sebastian Carlsson was the highlight of the day as he handily won his singles and doubles match.

“Sebastian had a good day with getting two wins in his first collegiate action,” Associate Head Coach Mark Booras said. “It is always nice to start your first tournament with a couple of wins. Sebastaina has a good opportunity to move ahead in the draw tomorrow and we are looking forward to seeing some good things out of our guys over the weekend.”

Carlsson breezed past Andy Narido of SMU to win by a 6-1, 6-0 score. Senior Kevin Dessauer also won his match by only losing one game when he defeated Rice’s Filip Zivojinovic.

Freshman Julien Gauthier held his own in his first match as a Tiger. The Canadian went to a tiebreaker in first set and dominated the second but struggled in the final set as he fell to Adolfo Solares of SMU, 7-6, 1-6, 6-2.

In doubles, LSU’s two tandems of Carlsson and Jan Zelezny, and Dessauer and Gautheir both came out victorious.

Play resumes Saturday with doubles beginning at 9 a.m. and singles beginning shortly after. Each of the Tigers in Houston will continue play through the weekend.