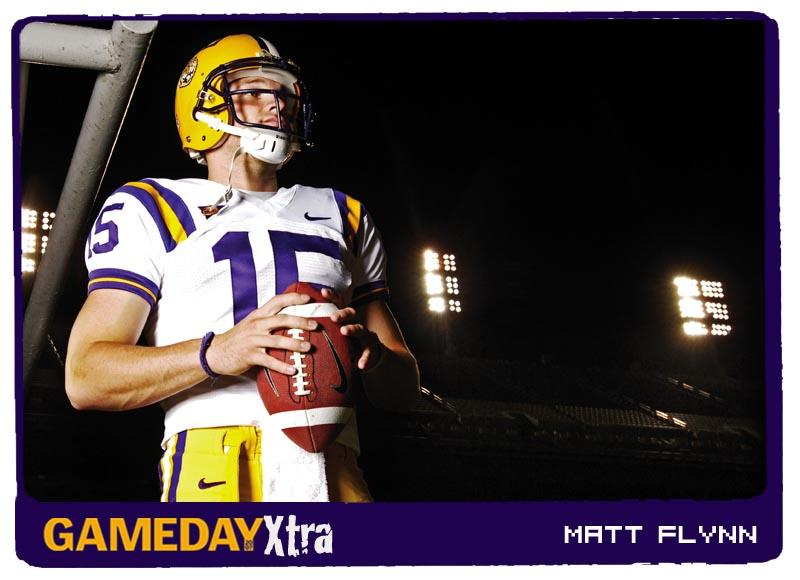 Matt Flynn arrived on the LSU campus on Aug. 3 to report for fall camp. He parked his Yukon at West Campus apartments to check in his residence for the next two weeks. As he started walking to the building, television cameramen and photographers began capturing his every move. From a distance, a high-pitched cheer was directed toward the fifth-year senior.

“Oh my God it’s Matt Flynn! You are my hero Matt!” someone yelled from the second floor.

However, the screams were not coming from a young child yelling for his favorite football player — it was 6-7, 350-pound Herman Johnson shouting at LSU’s new starting quarterback. Johnson’s job normally is to protect Flynn as his starting offensive left guard, but on this day the boisterous big man was jokingly harassing the offensive captain.  Flynn laughed it off and continued to make his way to the entrance. Flynn’s teammates, particularly the offensive linemen, love to remind Flynn of his new high profile position by calling him ?Hollywood.’ Johnson made one more crack at Flynn before he could enter the building.

“I loved you in Bourne Ultimatum!” Johnson shouted.

He may resemble the star of the Bourne movie trilogy and share the same first name, but Flynn has not reached Matt Damon’s celebrity status ? yet.

Damon might be the bigger celebrity, but there is no question Flynn is the most popular Matt in Baton Rouge. When the LSU football players first took their seats at their annual media day, 10 reporters raced to surround Flynn, with no other player attracting more than two media members. Flynn had one of the longest autograph lines at Fan Day, second to only coach Les Miles.

The large amount of preseason attention might seem a lot for someone whose r?sum? showed one start in three seasons. However, that one game, the 2005 Peach Bowl, was LSU’s most lopsided bowl victory in team history. Flynn was named Offensive MVP of the 40-3 victory over Miami (Fla.) after throwing for 196 yards and two touchdowns and running for another 39 yards. The performance only increased the desire of Flynn’s fan base for him to be the starter. Even when then-starter JaMarcus Russell was putting up Heisman-like numbers, some fans saw Flynn as the overlooked savior.

Flynn finally got his long-awaited chance after Russell skipped his senior season to go on to become the No. 1 pick in the NFL Draft.

“I recognize this is my last year and I feel very fortunate that I have this opportunity,” Flynn said. “I am going into this last year and not putting any pressure on myself. I am going to let it all cut loose because I feel if you put pressure on yourself it will limit you. I am just going to cut it loose and have the best year possible.”

Flynn was smothered with preseason questions about the pressure and high expectations.  The expectations won’t faze him. He isn’t worried or apprehensive because after years of waiting in the wings, Flynn believes his chance at the spotlight could not have come at a better time.

Flynn began playing quarterback when he was in third grade. However, the Tyler, Texas native took a four-year hiatus from football before returning to the gridiron in seventh grade. Even when he wasn’t playing organized football, Flynn was developing his skills as a quarterback with the help from his favorite coach ? his father. Alvin Flynn played quarterback for Baylor from 1967-69. Matt says his dad taught him the fundamentals of being a quarterback through high school.

“He taught me everything I know about throwing,” Flynn explained. “He is the reason that I am in the position I am right now.  He taught me about mechanics and how to approach the game mentally.”

Alvin’s coaching paid off as Matt played quarterback at Robert E. Lee High School in Tyler. In his senior season, Flynn led the Red Raiders to the state playoffs. His impressive high school campaign, however, looked like it had come to an abrupt end in the first round of the playoffs. Midway through the Red Raiders’ first-round contest, a defender wrapped Flynn’s legs up, breaking his left foot. The break was a short-lived speed bump as Flynn was back in action the next round. Flynn continued to play and played well enough to take his team to the semifinals.

“It was tough because I was running a lot prior to the break,” Flynn commented. “But from there I just tried to stay in the pocket and move as little as possible.”

Playing three playoff games on a broken foot added to an already remarkable r?sum? for college recruiters, helping him to land at LSU.

Last season, Russell and Dwayne Bowe set an LSU career record by connecting for 23 touchdown passes. Both Russell and Bowe were NFL first-round draft picks. This season Flynn and top target Early Doucet hope to gel as well as their predecessors did.

“I feel that Early and I have a good chemistry together,” Flynn said. “I know where he is going to be before he gets there. If it helps the team, then I am going to try and get him the ball as much as possible.”

Flynn and Doucet met many times over the summer to work on their chemistry. The Tiger tandem practiced so much together that their teammates gave them a nickname ? Salt and Pepper. With Flynn as Salt and Doucet as Pepper, the duo uses their nicknames to communicate on the field.

“When he gives me the ?salt’ signal and I show him the ?pepper’ signal, that means we are going deep,” Doucet explained, demonstrating the signals by turning his fists downward.

Whether he goes by ?Hollywood,’ ?Bourne’ or ?Salt,’ Flynn knows his time is now. This year is his one shot to prove he can handle the reins as LSU’s starting quarterback.

LSU won the BCS National Championship in 2003, Flynn’s first year as a Tiger. There is no reason to believe his LSU career can’t end the same way it started.