Behind the Scenes: LSU Concessions 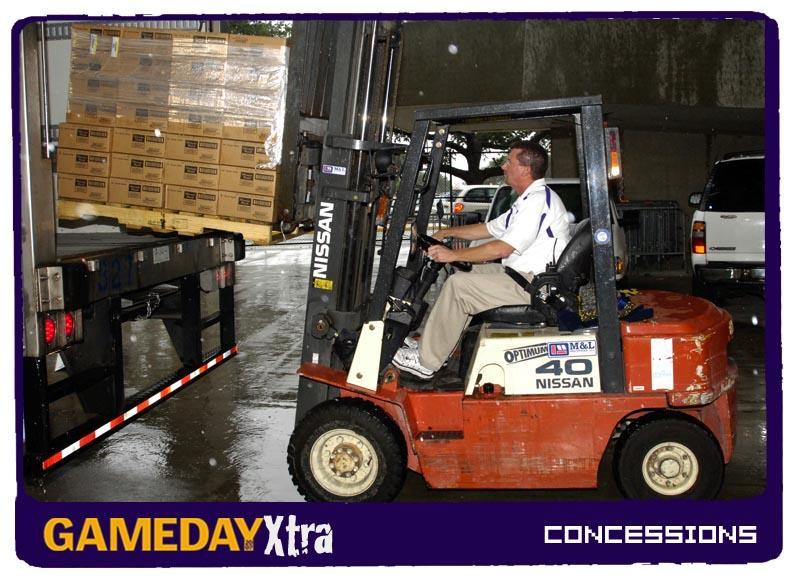 Welcome to the largest tailgate at LSU.

At this tailgate, however, fans don’t come to eat.

“They (the fans) are here to watch a football game, and it’s Tiger Concession’s  job to add to the entertainment,” said Larry Wallace, director of concessions for LSU.

Wallace has been at LSU since 2004 and oversees every Tiger Dog and Manda Sausage Po-boy served in every athletic venue on campus from Alex Box to the PMAC.

His biggest job, though, occurs on seven or eight Saturday nights in Tiger Stadium every fall. To make sure it’s done right, the Concessions managers and lead hourly staff begin preparing on June 1st.

“We do three-quarters of our business in seven home games in Tiger Stadium,” said Wallace. “In thirty-five hours we’ll bring in over $3 million.”

“For the first game, we’ll get orders delivered up to three weeks in advance,” he said, “After that; we have to do it all over again in five days.”

So what is a mid-season week like for the man responsible for feeding Tiger Stadium?

Here’s a look at how Wallace and his staff prepare to feed the LSU faithful while they watch their tigers play:

Wallace arrives at 6:30 a.m. and organizes all the previous week’s numbers and information for an 8:30 a.m. meeting with the athletic department. He and his staff send food orders to distributors and then take inventory of every concession stand in the entire stadium.

Stock arrives. Wallace and his 12 staff managers are responsible for transporting over 90 tons of ice and tens of thousands of beverages, hot dogs, sausages and nachos to 60 locations throughout the stadium.

All that ice alone takes two days to receive and then disperse around Tiger Stadium to the 150 ice bins throughout the stadium.

“All that and in this heat,” said Wallace, “We have to keep the staff well hydrated and in pretty good shape to get the job done.”

“And to be honest,” Wallace says, “I don’t do it. My staff does it. All the credit goes to them.”

“We’ve got enough in stock and that’s been proven,” he said, “We have never run out of anything.”
Saturday ? Game Day

Wallace and his staff arrive at the stadium at 6 a.m. and won’t leave until 5 a.m. on Sunday.

“Nobody can do this job without good people,” said Wallace. “They are, by far, the best people I’ve ever worked with because we all think the same. We put the fan first.”

During the game, Wallace and is staff are on the move. Their top priority, the fan, is always on everyone’s mind and their number one goal is to keep the fan happy before, during and after the game. That’s why you’ll never see any one of the hundreds of stands closed when fans are in the stadium.

“Every fan that comes in here wants to see a football game, they don’t want to see me,” said Wallace. “It’s our job to make it a pleasant visit for them any time they are a guest of LSU Athletics.”
Sunday

After leaving work at 5 a.m., it’s hard to believe Wallace would work later that afternoon. He does; though it is the calmest day of his week. In fact, Wallace says it’s not uncommon for him and his staff to work 21-26 consecutive days during the season.

On Sundays, Wallace will go over the numbers from the previous week’s game and begin compiling the order numbers for the upcoming week.

Wallace comes to LSU after managing a convention center arena in Huntsville, Ala. A thick southern drawl hides the fact that he’s a native of Pennsylvania and a diehard Philadelphia Eagles fan. Where he picked the accent up is anyone’s best guess until he divulges where he attended college. Suffice to say his alma mater is north of Baton Rouge, south of the Mason-Dixon Line and a fierce rival of the Tigers.

Make no mistake about it though ? he’s an LSU fan through and through.

“This is the best job in the country by far,” said Wallace, “Where else would you want to be than in Tiger Stadium? You’ve got 93,000 fans and the best football program in the country, there’s nowhere else I want to go.”

“This is the best job I’ve ever had.”

According to fan responses, he’s also the best man for the job. Throughout all eight home games of the 2006 football season, not a single complaint was delivered to Wallace or the Athletic Department.
That’s 744,000 satisfied customers for 2006 and surely many more to come.

And he’s still working to improve the quality of the Tiger Stadium experience. Visitors to the stadium will now see Community Coffee, Domino’s Pizza, The Jambalaya Shoppe, Chick-Fil-A and many more vendors in and around the stadium.