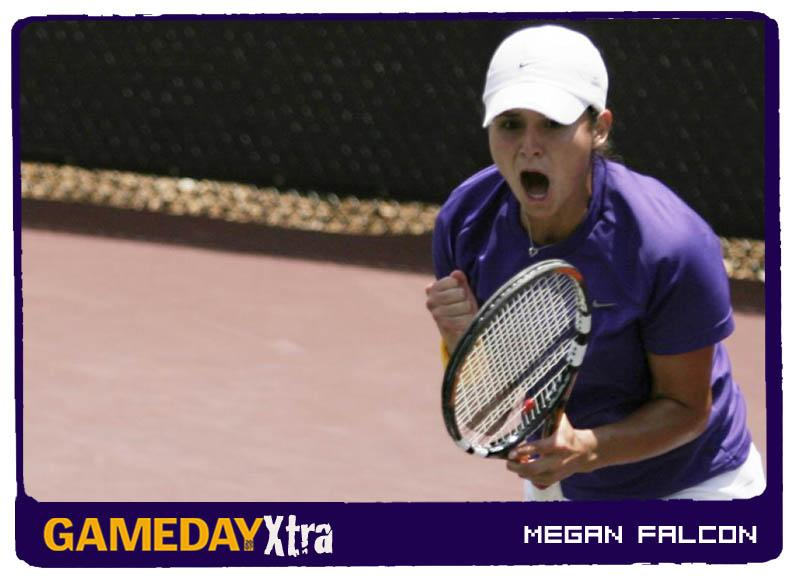 It did not take long for Megan Falcon to make a name for herself in her first year of collegiate tennis. Last year as a sophomore, she led the Lady Tigers to a Southeastern Conference Western Division title and a NCAA Tournament bid. She posted an outstanding 38-3 record on her way to being the first Lady Tiger to reach the NCAA Singles Semifinals. Falcon was named the SEC Player of the Year and an ITA Singles All-American.

Most college players would be satisfied with Falcon’s accolades for a career. However, as Falcon enters her junior campaign as the top-ranked player in the nation, she is determined to lead the team to new heights and take care of ?unfinished business’ in the individual tournament.

If there is one thing Falcon’s neighbors from her hometown of Alameda, Calif. remember about her, it is the constant noise of tennis balls striking a garage door.

When Falcon was 5 years old, she was watching the French Open on television and took a real interest in tennis.

“I was watching the French Open and told my grandfather (Phill) I wanted to try tennis out,” Falcon said. “He bought me some racquets, tennis balls and private lessons and encouraged me to play as long as I wanted to play.”

Falcon would go outside everyday to practice against the garage exterior. After training for a while and taking private lessons she entered a 12-year-old’s tournament ? when she was 7. Falcon reached the finals before falling just short of winning her first tournament.

Falcon’s early success came as no surprise to her mom who saw her commitment on a daily basis. Denise said the main force behind her daughter’s work ethic was Megan.

“The family was supportive and did whatever we could to help her,” Denise said. “But it was mainly her coming to us and asking to join tournaments and tennis groups.”

“Being around tennis I have learned a lot about how the parents push their kids to practice and improve, but with Megan she is the one pushing herself. Nobody has to push her because it is in her heart. It is what she really wants. We never had to tell her to keep practicing because she is very self-motivated.”

As Falcon continued to train and gain experience, she began putting together an impressive r?sum? for her junior career. She reached as high as No. 1 in U-16 and No. 5 in U-18. She teamed up with Adriana Gonzales Pensas of Spain to reach the semifinals of the Junior Wimbledon Doubles Championships.

Falcon was listed as a five-star recruit heading into college and was drawing interest from teams across the country.

A lot of variables went into Falcon’s decision making process, but once she figured out what she wanted she chose to go to LSU.

“I knew I had a lot of family here, I liked the school, enjoyed Tony (Minnis) as a coach and it seemed like a good fit for me.”

Falcon’s career as a Lady Tiger began with a speed bump as an NCAA ruling required her to sit out her freshman year. The Alameda, Calif. native said sitting out a year helped her get used to college and living in Baton Rouge.

“It was frustrating just watching the team, but it gave me time to get acclimated to the school,” she said. “I think it helped me in the long run.”

Falcon had an outstanding collegiate premiere at the Riviera/ITA All-American Championships where she captured the consolation singles title. Falcon won nine matches against ranked opponents and only lost three sets on her way to winning the consolation title.

Falcon’s dominating play ran through the regular season as she went 21-0 and helped the Lady Tigers win the SEC West and an NCAA bid. The Lady Tigers lost to No. 22 Duke in the NCAA first round. However, Falcon’s season continued in the NCAA individual tournament where she would compete in the singles and doubles, with partner Hannah Robinson, portions of the tournament.

When Falcon arrived at the NCAA Individual tournament, she was greeted by a number of family members, including her mother Denise, grandparents Rose and Phill and uncle Joe.

“For my family to come from California it meant a lot because they don’t get to see me play tennis much,” Falcon said. “They got to see me play for a whole week. They were a really good support team for me.”

Joining the Falcon faithful were three teammates (Nicole Kantor, Ashley Murdock and Staten Spencer) and her boyfriend Chris White, who is a member of the LSU Swimming and Diving team.

Falcon and Robinson fell in the first round of the doubles tournament, but Robinson stuck around to support her partner. In true Tiger fashion, Robinson and Spencer even painted their faces purple and gold while rooting for Falcon.

“It is great to have so many people here,” Falcon said during the tournament. “When I hit a good shot, I don’t have to get too excited because I could hear them clapping in the background and it makes it a lot easier for me to play.”

During the tournament, Falcon stayed calm and focused, qualities that were amplified as she continued to knock off the nation’s elite players.

Falcon’s intensity was showcased after each point by yelling “Come on!” with an energetic fist pump. Falcon’s passion and work ethic are driven by her desire to win every match.

“I hate losing. I think it all pretty much boils down to that,” Falcon explained. “I don’t give up on any points. I fight the same way the whole entire match. I think that is what prevents a lot of players from being as good as they can be, not competing the entire match.”

Falcon’s pursuit for winning carried her to the NCAA Semifinals where she would face sixth-seeded Lindsey Nelson of the University of Southern California. The semifinal match is where Falcon’s magical run would come to an end as Nelson won, 7-6 (2), 6-2.

The loss was a huge letdown for Falcon who had only lost two collegiate matches heading into the semifinals. Denise, who traveled 2,500 miles to watch her favorite Lady Tiger play, said she knew Megan would be really upset but wanted to remind her of what she had accomplished.

“We were all really proud of her,” Denise said. “I know she was let down. She can be hard on herself because she has such a drive to win. I know she was disappointed, but we weren’t. We were proud of how well she did and kept reminding her she had set records at LSU and that she should be proud of that.”

Falcon said she believes she wasn’t at her best in the semifinals and hopes she can top her performance next time.

“I watched some of that match that I lost, and it was disappointing,” Falcon said. “I feel I could have played a little harder. Hopefully I will just learn from that and improve this year.”

Although Megan had a number of family members and friends at the NCAA tournament, her brother, Roman, and father, Paul, were not able to attend. Roman and Paul still kept track of their favorite tennis player by watching her matches on the Internet and calling her during the tournament.

“It meant a lot to me that my dad and brother kept up with how I was doing in the tournament,” Megan said. “California is a few hours behind and the match times could be inconvenient for them but they still wanted to see how I was doing.”

Falcon’s close nit family had a hard time dealing with her going far away to Baton Rouge for college, but Denise said she knew her daughter could handle it and that the move would help her career.

“She could have gone anywhere in the country and she chose LSU,” Denise said. “I was happy because we do have a lot of family there. I am glad to see she is doing well with setting records and making a name for herself.”

“It makes me want to cry…because…she is my hero,” Denise said while trying to hold back tears. “She has amazed me, and I never thought I would be so fortunate to have a daughter like Megan Falcon.”

“She is a blessing, and I am so proud of her. I couldn’t ask for anymore from her. She has accomplished so much, and it’s unreal. I have to pinch myself because it seems surreal. She is an unbelievable young lady.”

One thing is clear about this talented girl from California: The only thing that matches Falcon’s dedication is the support of her family and friends. As much as they enjoy the All-American player, the SEC Player of the Year, and the No. 1 player in the nation, it is Megan Falcon, the person, that they love the most.