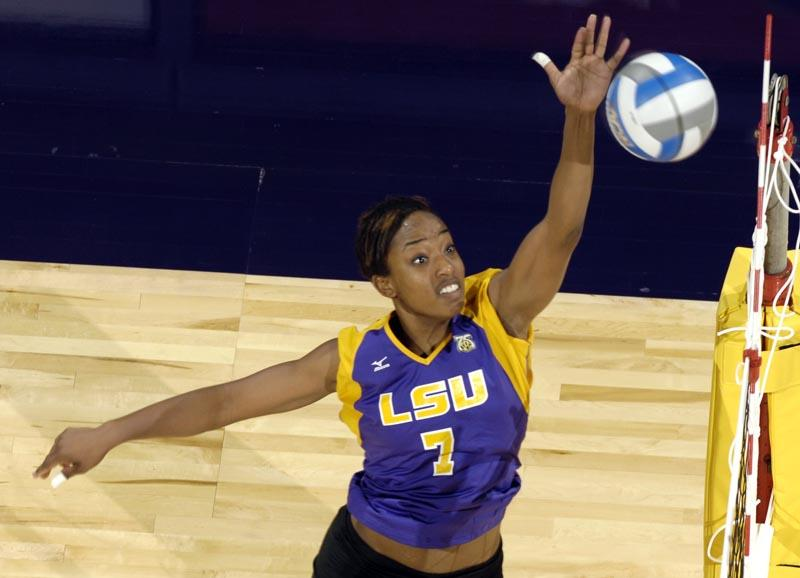 OXFORD, Miss. — With a near school record 24 kills by Kyna Washington, the 24th-ranked LSU volleyball team rolled past Ole Miss, 30-24, 30-22, 30-21, on Wednesday night in the Gillom Sports Complex to open Southeastern Conference play.

With the win, the Tigers improved to 9-1 on the season and 1-0 in league play. The loss was only the second of the season for the Rebels, who fell to 10-2 overall and 0-1 in conference action. LSU has now rattled off three straight wins after a tough four-game loss to Iowa State last weekend. It also marked the first three-game sweep of Ole Miss in Oxford since Nov. 2004.

“This was absolutely just a great performance by this team,” said LSU head coach Fran Flory. “We came out with great energy and great intensity. Top to bottom there isn’t one person who didn’t do exactly what we asked them to do. We executed the game plan to perfection.”

Washington’s 24 kills marked the second most in a three-game match in school history. The Tiger junior had posted 22 kills going into the third game before closing out with 24, two shy of Monique Adams’ record of 26 against Oklahoma in 1991. In addition, Washington posted eight digs, three blocks, while hitting an amazing .378.

Joining Washington with double-figure kills was Marina Skender with 16, eight of which were recorded in the final frame; while hitting .452; and Lauren DeGirolamo with 10 while hitting at a .421 clip.

For the seventh time in 10 matches, Elena Martinez recorded 20 digs as she posted exactly 20 against the Rebels. Skender recorded her third double-double of the year with 15 digs to go with her 16 kills. DeGirolamo also led LSU with five blocks, while Washington, Angela Bensend and Brittnee Cooper added three each.

It was a dominating team effort for the Tigers as LSU recorded 62 kills to only 34 for Ole Miss. In addition, LSU posted its highest hitting percentage of the year, hitting at a .346 clip as a team. The Tigers also dominated with 61 digs, compared to 42 for the Rebels. The closest statistic was in blocks with LSU leading 9.0 to 7.0.

“I know we are pretty excited about the win, but we also now believe we can step up into the next level,” said Flory. “Certainly this was our best performance so far.”

In the first game, the pair traded points for much of the early going, with nine ties before LSU took an 18-16 lead. With the Tigers leading, 19-17, Ole Miss scored five of the next six points to pull ahead by two, 22-20. After an LSU timeout, the Tigers scored four straight to retake the lead, 24-22, and never relinquish it. LSU went on to score six of the final eight points to take game one, 30-24.

Washington took over game two, tallying an amazing 14 kills in just that one game. Just as in the first game, the pair traded points early as they were tied 10 times before the Tigers took the lead for good at 16-15. LSU stretched its lead to five points before Ole Miss called its final timeout. Coming out of the timeout with a 22-17 lead, the Tigers scored eight of the final 13 points to go into the locker room leading two games to none, 30-22.

After playing close early in the first two games, LSU came out and jumped on the Rebels early in game three. The Tigers took an 11-7 lead before stretching it out to 15-9. Ole Miss got as close as two, 15-13, before LSU scored four straight to essentially put the game and the match out of reach. The Rebels staved off match point three times before the Tigers closed it out, 30-21.

LSU will remain on the road to take on Arkansas on Sunday. The Tigers will face the Lady Razorbacks at 1:30 p.m. in Barnhill Arena. LSU returns home next weekend to take on South Carolina and No. 6 Florida. The Tigers will face the Gamecocks on Friday at 7 p.m. and all fans wearing gold will get into the match for FREE. Sunday’s match against the Gators is scheduled for 1 p.m. and will be televised by Cox Sports Television on Baton Rouge cable channel 37.