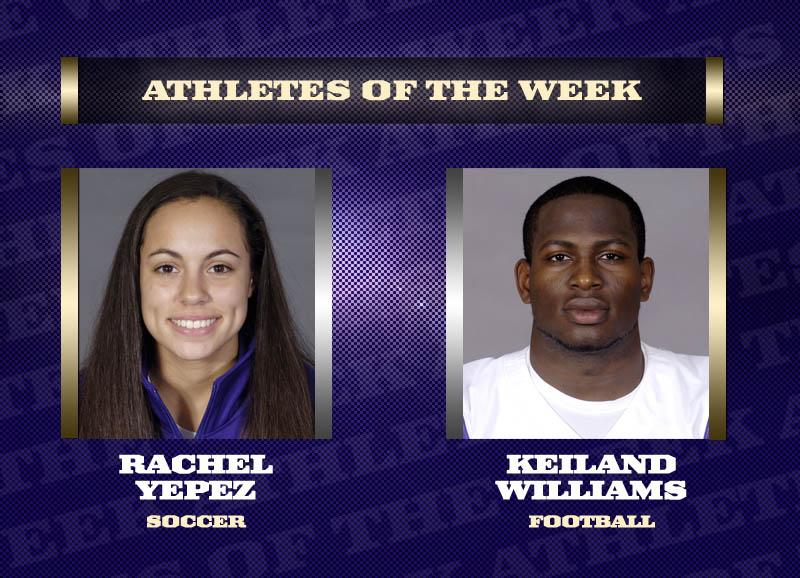 BATON ROUGE — Football’s Keiland Williams and soccer’s Rachel Yepez were named the LSU Male and Female Athletes of the Week on Tuesday, following a vote by a local media panel.

Williams, a sophomore from Lafayette, La., rushed for a career-high 126 yards and two touchdowns in LSU’s 48-7 dismantling of ninth-ranked Virginia Tech on Saturday. The 5-11 running back turned in touchdown runs of 67 and 32 yards. The 67-yard run marked the longest by a Tiger player since the 2004 season.

On the night, Williams averaged 18.0 yards on seven carries. He also caught two passes for 10 yards to finish with a total of 136 all-purpose yards.

Yepez was named the MVP of the Long’s Electronic Samford Classic after leading LSU to a pair of convincing wins over regionally-ranked opponents, Memphis and Miami.

The sophomore forward from Fayetteville, N.C., recorded her first career hat trick in the Tigers’ 7-2 win over Memphis and later added the first goal in LSU’s 4-1 victory over the Hurricanes.

Over the course of two games, Yepez fired a total of seven shots, including four on goal, to finish the tournament with an impressive .571 shot percentage. She currently leads the SEC with four goals this season and is tied for third in the conference in scoring with eight points.