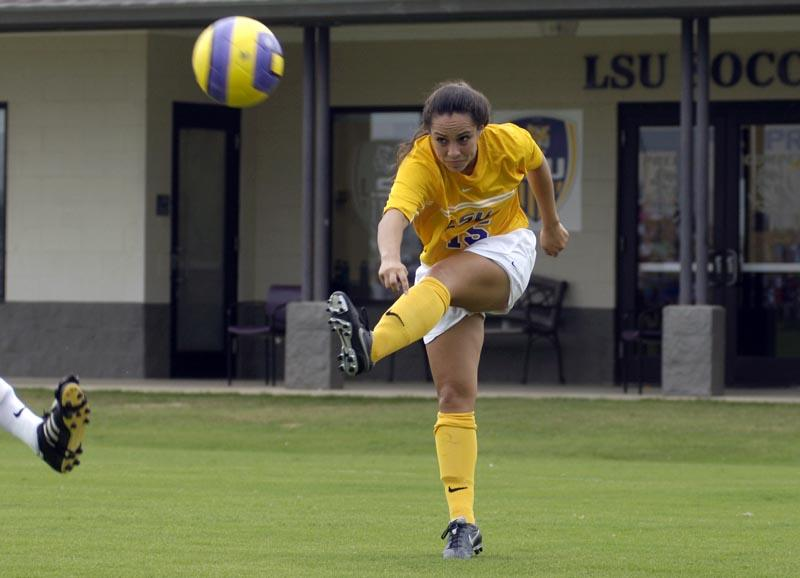 BATON ROUGE — After being named the Most Valuable Player at the 2007 Long’s Electronics Samford Classic in Birmingham, Ala., this weekend, LSU forward Rachel Yepez has been named to two National Teams of the Week released Tuesday.

She scored an SEC leading four goals on the weekend against a pair of regionally-ranked foes, recording her first career hat trick in LSU’s 7-2 win over Memphis on Thursday while scoring the first goal of the match in its 4-1 win over Miami on Saturday.

Yepez’s hat trick is the first for a Tiger since teammate and fellow sophomore Michelle Makasini accomplished the feat in a 3-0 shutout of the South Alabama Jaguars on Sept. 15, 2006.

“Rachel made really big strides from the opening weekend to the second weekend,” said LSU head coach Brian Lee. “Nobody in the country has worked harder than Rachel since last season, and no one deserves this kind of success as much as she does. We’re going to need that kind of production from her as we move into the meat of our schedule.”

The native of Fayetteville, N.C., has helped the Tigers to a perfect 4-0-0 start as she is currently the team’s leading goal scorer and is also tied atop the standings in the Southeastern Conference. She is also tied for fourth in the conference in scoring with eight points on the young season.