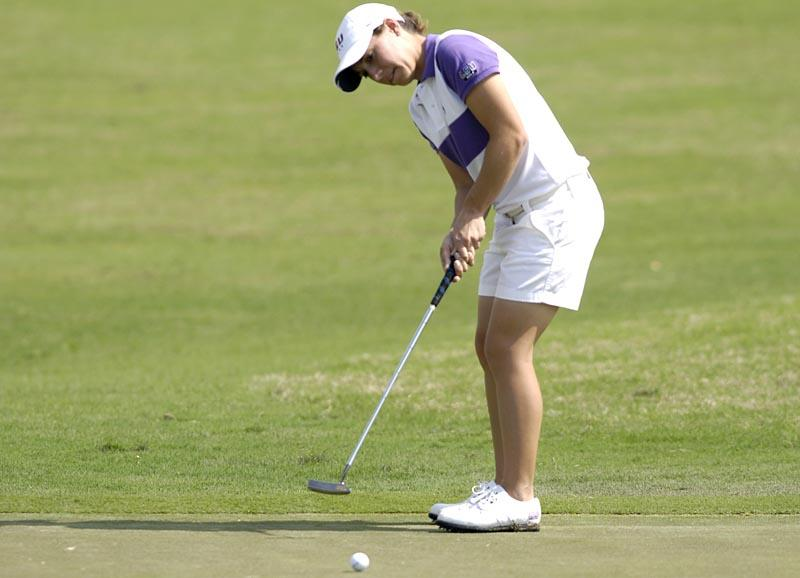 HANAHAN, S.C. — The 28th-ranked LSU women’s golf team made a strong statement in the opening round of the 2007 fall season, posting a two-under par 286 and is tied for the lead after the first round of the College of Charleston Cougar Classic here Sunday at the Yeamans Hall course.

The 286 score tied for the third lowest round in the 29 years of the LSU women’s golf program and just the eighth time the team has posted an under par round in tournament play.

The Tigers are tied with the Crimson Tide of Alabama at the two-under mark heading into Monday’s second round of play in the three-day 54-hole event. Notre Dame is also under par at one-under 287 in third, followed by Texas and Tennessee in a tie for fourth at even par 288.

Making the round even more impressive for the Lady Tigers was that the lineup included three freshmen playing their first collegiate rounds for LSU and all three were part of the four counting scores in the team total.

Norwegian freshman Amalie Valle came up big in the opener with five birdies and just two bogeys to post a three-under round of 69, tied for fourth in the individual standings. Notre Dame’s Lisa Maunu is the first-round individual leader at six-under par 66. In all, 17 players broke par on the 6,159-yard Yeamans Hall layout.

Redshirt freshman Nicole Crochet and junior Caroline Martens both posted even-par rounds of 72, tying for 18th in the individual standings, while LSU’s other freshman starter, Megan McChrystal, over came a front-nine double bogey to shoot one-over 73.

“I’m very pleased with how the freshman responded in their first round for the Lady Tigers,” said LSU Coach Karen Bahnsen. “But the thing we have to do now is continue to play well and put back-to-back rounds together. We shot under par in the second round last year and didn’t finish the tournament well, so we’ll have to see how the team responds now that they find themselves tied for the lead.”

Live scoring for the second round can be found at www.golfstat.com.