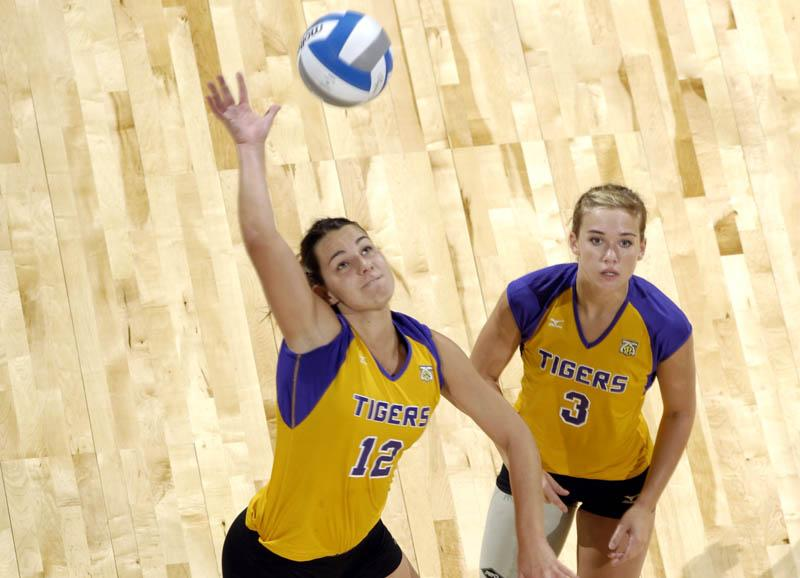 The Tigers ran their record to 8-1 on the season with the two wins and finished second in the tournament, while the Bulldogs dropped to 2-4 and the Hawkeyes fell to 5-3. The Iowa Challenge marked the conclusion of pre-conference tournaments for LSU as the Tigers open Southeastern Conference play next week on the road.

“I’m really proud of how we bounced back today after losing yesterday,” said LSU head coach Fran Flory. “We are still not very consistent, but we managed to come up with the big plays at the time that we needed them.

“This is a weekend that we expected in terms of the level of play and the type of teams that we played. I think we responded favorably and I think we became a much better team this weekend. We also saw that we need to get back in the gym.  We’ve got a couple of days before we get back on the court in the SEC We know we’ve got to get in the gym Monday and get better.”

Junior Elena Martinez, who was named to the all-tournament team, broke the LSU record for digs in a match overall with 34 against Drake, becoming just the second player in school history to record two 30-dig matches after posting 30 against Rice last weekend. Luciana Reis had been the only player in Tiger volleyball history with two 30-dig matches, recording matches of 30 and 31 digs in 1993.

“Elena Martinez was amazing all weekend,” said Flory. “Certainly she led the way for us.”

Kyna Washington, who was also named to the all-tournament team, led the match against Iowa with a career high 28 kills, while also posting 13 digs. Angela Bensend posted a career best with 16 kills, followed by Brittnee Cooper with 11 and Marina Skender with 10.

“I thought Kyna did a great job of being very efficient after a slow start on Friday,” said Flory. “It was a nice recovery by her.”

In addition to Skender’s 10 kills, the junior recorded 19 digs. Maggie Lonergan also posted a double-double with a career-best 68 assists to go with a career-high 16 digs. Lauren DeGirolamo led the Tigers with seven blocks, including three solo efforts.

In the earlier match against Drake, Washington led the effort with 16 kills to go with 10 from Skender. Cooper posted a team-best five blocks, while Martinez recorded 22 digs, tying her for the sixth most digs in a three-game match in school history.

In the nightcap, the pair traded points early on until Iowa pulled ahead 9-7. On the next point, the Hawkeyes appeared to take the point, but Iowa was playing with an illegal player and the point was reverted to LSU. The Tigers used that momentum shift to take a 14-11 lead. The Hawkeyes came back to tie it at 14. Again the teams traded points until LSU pulled ahead, 25-22, but the Tigers could not hold. Iowa went on to score seven of the final nine points to take the game, 30-27.

LSU fell behind in the second game, 10-7, but with Iowa leading, 11-8, a three-point rally by the Tigers evened the match. The Hawkeyes countered with a three-point run of its own, to pull ahead, 14-11. Strong serving by Martinez led to five-straight point and a 16-14 lead for LSU, which it would never surrender. The Tigers outscored Iowa, 14-10, to send LSU into the locker room even, 30-24.

After hitting only .128 in the first game with 13 kills, the Tigers came out in game two with a much improved .286 clip and 21 kills. In addition, LSU held the Hawkeyes to just 14 kills and a .143 hitting percentage.

A quick start put the Tigers ahead, 4-0, and LSU pushed ahead to lead by as many as 10, 21-11. Iowa then began its comeback as the Hawkeyes scored five straight and eight of the next nine to cut the Tiger lead to two, 22-19. LSU, however, would not relinquish its lead as the Tigers went ahead two games to one, 30-26.

Iowa sent the match to a decisive fifth game with a 30-19 win in game four. LSU could never find its rhythm as the Tigers hit .064 in the game, posting only 13 kills with 10 errors. Conversely, the Hawkeyes recorded their highest hitting percentage of the match at .256, committing only five errors to go with 16 kills.

In that decisive fifth game, Iowa began with three straight points before LSU tied it at four each. With the Hawkeyes leading, 7-5, a crucial call went the Tigers’ way as the down official ruled there was not touch by the LSU on a block attempt and the Tigers pulled to within one before eventually taking the lead, 8-7. LSU took a three-point advantage, 12-9, but the Iowa tied it again at 12.

The Tigers held the first game point, but a block by Iowa evened it up again. On LSU’s second game point, the Hawkeyes put a kill down to stay alive. After a kill by Marina Skender on Iowa’s only game point, a service error by Michelle Hensgens on game point three tied it once again. A kill by Skender followed by an attacking error by Iowa gave the Tigers the match, 19-17.

In the first game against Drake, the Tigers came out on a mission. LSU went ahead 5-2 before stretching the lead to seven, 13-6.

The Bulldogs came back to cut the lead to only four, 16-12, but the Tigers put together several runs of three points to outscore Drake, 14-9, the rest of the way and earn the first game, 30-21.

After hitting only .143 in Friday’s loss, LSU came back to hit .311 in the first game. The Tigers posted 18 kills with only four errors, compared to a .109 clip for the Bulldogs, who recorded 14 kills and nine errors. In the second game, the Tigers dropped down slightly to a .241 hitting percentage with 12 kills and five errors, but Drake failed to record positive numbers as the Bulldogs posted 10 kills and 10 errors for a .000 clip.

LSU came out and pulled ahead for good early in the second game. The Tigers led 10-3 before Drake called its first time out. By the time the Bulldogs called their final timeout, LSU was leading 23-13. The Tigers went into the locker room easily leading, 30-17.

LSU upped its play again in the third game as the Tigers recorded a .500 hitting percentage, scoring 18 kills with only four errors, while holding Drake to negative hitting at -.048 on only six kills with seven errors.

After LSU took a 7-2 lead, the Bulldogs came back to even the game at nine all. Strong serving by Washington put the game and match away for the Tigers. When Washington’s serve began, LSU lead 12-11. By the time she hit a serve into the net that ended the rally, the Tigers were leading 22-11, having scored 10 straight. LSU went on to take the game and the match, 30-18.