by LSUsports.net (@LSUsports)
Getting to the Game: Traffic, Parking, Tailgating and In-Stadium View and Purchase GameDay Programs Order Your Copy of the LSU Football Media Guide Join the Geaux Zone to Watch Pregame Video and Listen Live GameDay Central: Complete Game Info National Spotlight to be on LSU-Virginia Tech +0 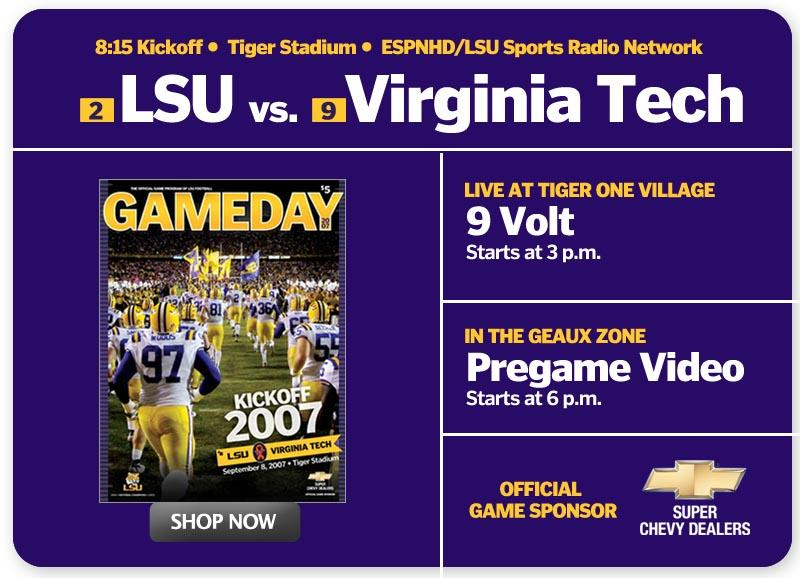 BATON ROUGE — All eyes will be on Tiger Stadium tonight as second-ranked LSU hosts ninth-ranked Virginia Tech in what is the marquee matchup in college football this weekend.

Members of the Geaux Zone on LSUsports.net can watch LIVE pregame video (ends at kickoff per SEC regulations) and listen to the entire game audio broadcast starting at 6 p.m. CT. Not a member? Join now.

Kickoff for tonight’s game is set for 8:22 in a sold out Tiger Stadium. The game will be televised to a national audience by ESPN. LSU brings a 1-0 mark into the game following last week’s 45-0 win over Mississippi State. Virginia Tech, also 1-0, opened its season with a 17-7 victory over East Carolina.

It will mark only the second-ever meeting between the teams and the first time the Hokies have ever played in Tiger Stadium. LSU dropped a 26-8 decision to Virginia Tech in Blacksburg to open the 2002 season.

It will also be only the third time in the history of Tiger Stadium that a pair of top 10 teams will meet in a non-conference matchup. The last time it happened came in 1987 when No. 4 LSU and No. 7 Ohio State battled to a 13-13 tie.

6 p.m. LSU pre-game radio show on air from Tiger One (outside PMAC)

“We’ve had a good week of preparation,” LSU coach Les Miles said. “We are excited about the opportunity to play a very good Virginia Tech team in Tiger Stadium. We have tremendous respect for Virginia Tech and the program that Frank Beamer has built there. What he has done with his program has really been a point of emphasis for any coach that wants to run a program and do things the right way.

“With great respect we look forward to playing Virginia Tech. They beat a talented East Carolina team. When we looked at the film, you could see that East Carolina had a number of talented players. Virginia Tech really controlled the game from the beginning.”

On paper, the LSU-Virginia Tech contest looks like one that should be one dominated by the defensive side of the football. Both teams have ranked among the nationally leaders in defensive statistics for the past four years. Last week, LSU held the Bulldogs to just 146 yards in its shutout, while the Hokies limited East Carolina to 261 yards and seven points.

LSU’s defense is led by All-America defensive tackle Glenn Dorsey, who opened the season with five tackles, two tackles for losses and a sack against Mississippi State. Linebacker Ali Highsmith recorded eight tackles a week ago, while safety Craig Steltz tied a school-record with three interceptions in that game.

“Their defense plays a great scheme and has been nationally ranked for years,” Miles said. “They play hybrid players who are interchangeable. They are very comfortable with their safeties down in the box trying to stop the run. They are a very physical football team and we expect a strong showing from them.”

When the Tigers have the ball, they will continue to look for steady play from quarterback Matt Flynn, along with the big play capability of wide receiver Early Doucet and the rugged running attack of Jacob Hester and Keiland Williams.

A week ago, Flynn engineered an LSU offense that racked up 45 points without a turnover in the win over Mississippi State. Flynn threw for 128 yards and a pair of scores and ran for 42 yards. Hester led the Tigers with 68 yards rushing, while Doucet set a career-best with nine catches for 78 yards and one touchdown.

When the Hokies have the ball, Virginia Tech is led by quarterback Sean Glennon, who threw for 245 yard and a score in the win over East Carolina. Running back Branden Ore added 70 rushing yards, while tight end Sam Wheeler caught seven passes for 81 yards and a TD in the win over the Pirates.

The Hokies also have reputation for making big plays when the opponent lines up to punt. Five years ago when the Tigers and the Hokies met, Virginia Tech blocked two punts on its way to the 26-8 win over LSU.

“On special teams, they have a national reputation for their play in that area of the game,” Miles said. “It is going to be a great challenge for our guys. We understand they have the ability to block kicks and we need to protect our kicks. That will be a great match up. And yes I understand that may be one of the key pieces to our game plan.”

Also on the line tonight will be LSU’s 13-game winning streak, one that stretches back to the 2005 season. LSU won all eight home games a year ago and the Tigers are 13-1 in Tiger Stadium under Miles.

“We’re excited to be playing in Tiger Stadium in front of our fans,” Miles said. “We been focused this week in practice and we’ve improved. We need to do the things we have always done to be successful here. It’s going to be a great feeling to lead the team back into Tiger Stadium.”