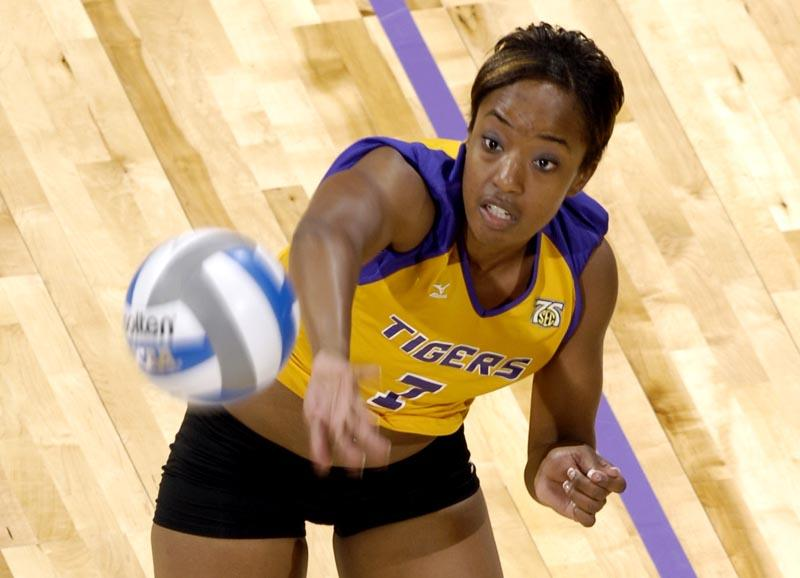 With the loss, the Tigers fell to 6-1 on the season, while the Cyclones evened their record at 4-4. LSU will complete tournament play on Saturday as the Tigers take on host Drake at 10 a.m. and Iowa at 5:30 p.m.

Despite out killing Iowa State, 67-56; and out digging the Cyclones, 68-55, LSU could not come up with the big points when it needed to. The Tigers committed almost 20 more errors than Iowa State, 41-23, and that proved to be the difference as LSU hit a season low .145 in the match.

“We truly got out played,” said LSU head coach Fran Flory. “They played harder than us. They played faster than us and we did not answer the bell. They took us out of our offense and took us out of what we know is successful for us. We were not a very mentally tough team tonight and we’ve got to bounce back for two touch matches tomorrow.”

Kyna Washington led the match with 19 kills, while also posting 19 digs, both of which were season highs. Lauren DeGirolamo added 16 kills with 11 for Marina Skender. Brittnee Cooper led the Tigers with six blocks, while Maggie Lonergan, DeGirolamo and Washington had five each.

Elena Martinez recorded her fourth match of the season with 20 or more digs, posting a match high 25. Iowa State held the tough serving of LSU in check as the Tigers recorded a season low four service aces, while Skender led the match with three.

Early in the first game, the Tigers took a lead but Iowa State kept the game close. With LSU leading 8-7, the Tigers went on a 4-0 run that pushed the lead to 12-7. The Cyclones countered with a run of their own that gave them their first lead of the game, 14-13, before leading by as many as three, 16-13. LSU used strong serving to retake the lead for good, 20-19, before a kill by Bensend gave the Tigers the game, 30-26.

With the game tied at 13 in the second game, Iowa State went on an 8-0 run that put the Cyclones ahead, 21-13. Trailing by as many as 10, LSU clawed back into the game, getting as close as six, 26-20, but could not overcome an improved Cyclone offense as Iowa State evened the match, 30-22.

After trading the lead early in the third game, the Tigers used a 3-0 run to pull ahead by four, 10-6. With LSU leading 15-11, the Cyclones scored nine straight points to retake the lead and extend their lead to 20-15. The Tigers got back to within one, 20-19, but could not quite get over the hump as Iowa State went on to win game three, 30-26.

For the fourth straight game, the pair traded points early on before a big run by Iowa State put the Cyclones ahead for good. With the score tied at nine, Iowa State scored five straight to take the lead for good, 14-9. The Tigers got back to within two, 15-13, but could get no closer. The Cyclones went on to earn the game and the match, 30-22.