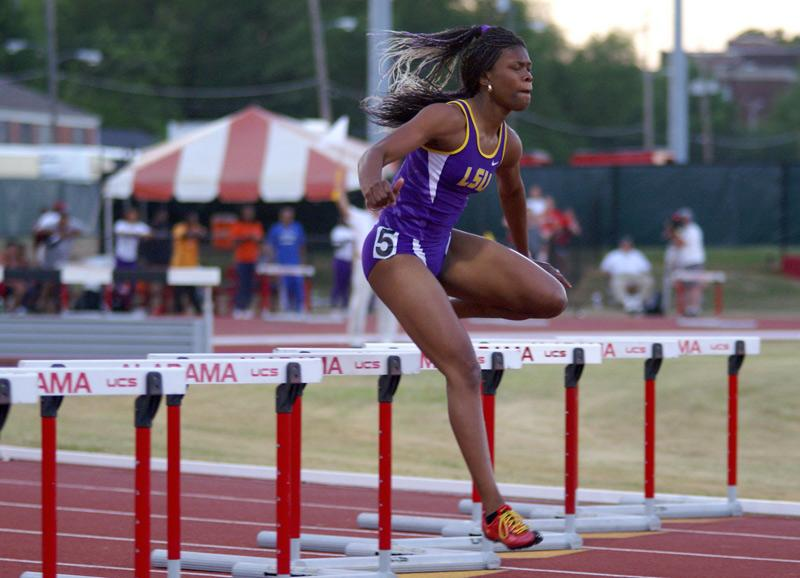 BATON ROUGE — A total of 10 current and former athletes represented the LSU track and field program well at the 2007 IAAF World Championships in Osaka, Japan, last week while earning a number of top finishes with some truly memorable performances.

Highlighting the competition for the Lady Tigers was sophomore hurdler Nickiesha Wilson, who shattered the school record in the semifinal 400-meter hurdles with a time of 53.97 seconds.

Wilson, who just missed winning a medal for Jamaica in her World Championship debut with a fourth-place finish in the event, eclipsed the previous school record mark of 54.82 set during the 1987 season by former Lady Tiger national champion Schowanda Williams.

“Nickiesha performed like a champion in the first major international competition of her career,” said LSU head coach Dennis Shaver. “She prepared herself well and got herself ready to run a great race each time. It’s a tribute to her mental toughness how she maintained poise and lined up and ran a new PR (personal record) in that kind of competition.”

Also making his first career appearance at the World Championships was junior All-American sprinter Richard Thompson. The native of Trinidad and Tobago advanced to the quarterfinal of the 100-meter dash and finished the meet in 31st place.

“Richard has had just a tremendous outdoor season, and we look forward to him stepping it up again next year,” Shaver said. “He also did a great job of preparing himself for this meet. We try to create that kind of a competitive environment here at LSU, and both he and Nickiesha felt comfortable running alongside the best athletes in the world.”

Leading the way for the contingent of former LSU athletes was triple jumper Walter Davis of the United States. Davis, a six-time NCAA champion during his career at LSU from 2001-02, came up just short of defending his world title by winning a bronze medal in his specialty.

The Baton Rouge native won a gold medal in the triple jump at the World Championships two years ago in Helsinki, Finland, and is sure to be among the favorites to win a gold medal at the 2008 Olympic Games in Beijing, China, next summer.

Former Lady Tiger standouts Lolo Jones and Sherry Fletcher each posted top-10 finishes in their respective events at the World Championships as Jones took sixth in the final of the 100 hurdles while Fletcher placed 10th in the 200-meter dash after advancing to the semifinal round.

Former Tigers Alleyne Francique of Grenada (400 meters) and Isa Phillips of Jamaica (400 hurdles) each posted 17th-place finishes in their events. Marian Burnett of Guyana placed 20th in the 800 meters, Laverne Eve of The Bahamas took 21st in the javelin and Hazel-Ann Regis of Grenada finished 39th in the 400 meters.

“Our former athletes do a tremendous job of representing LSU on the international stage,” Shaver said. “They let people know where they’re from and are proud to call LSU home. Sherry and Isa also performed well in their first major international competition. To make it to the semifinal puts you in the top 16 in the world for that particular year.

“I was also proud of Walter for winning a bronze medal considering he’s been injured for most of the year. That bodes well for him as he prepares for the Olympics. I really can’t say enough about all of our former athletes and the way they represented their countries and this university.”