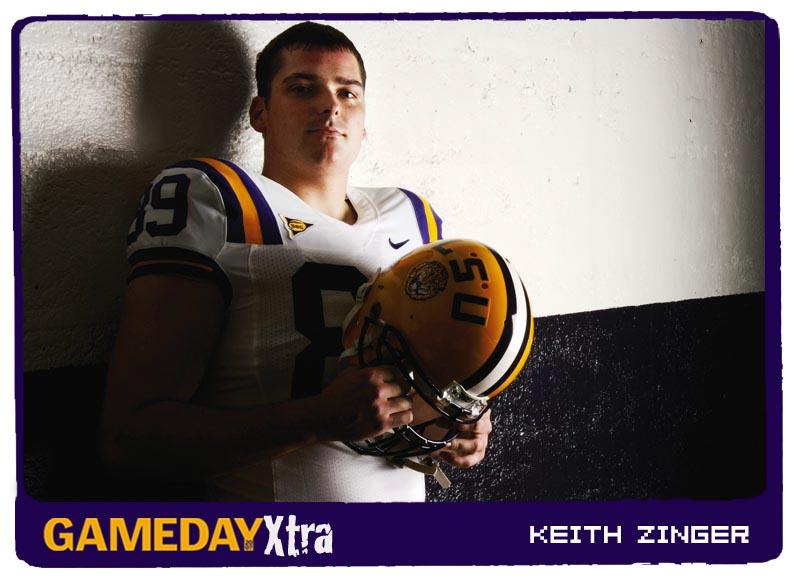 More than 92,000 people were in attendance in Tiger Stadium when LSU dismantled Arizona last September, but Keith Zinger was not one of them. Sitting in a hospital bed with an IV drip filling his arm with much-needed medicine, Zinger watched his team on TV.

“It was hard seeing them play on TV, knowing I should have been out there,” Zinger said. “It was hard, knowing that I might have been able to make a difference and just be able to go out there and help the team.”

The 6-foot-4 senior was diagnosed with ulcerative colitis, a disease that causes inflammation in the colon. The effects of the disease caused tremendous pain for Zinger. No matter what he ate it would not stay down. No matter how little he moved he still experienced severe cramping.

The situation only grew worse. LSU’s athletic trainers and doctors were quick to diagnose Zinger with the disease, but it was clear that he had to go to the hospital to receive the proper treatment. It was a discouraging time for Zinger.

During the time he spent in the hospital Zinger’s health recovered as doctors treated him with three immunosuppressives. After Zinger was released from the hospital he began to gain back much of the weight he lost during the initial struggle with the disease.

He then returned to the team, and Zinger’s teammates welcomed him back with open arms.

“When I came back they all made me feel like they missed me and they needed me. Everybody on the whole team encouraged me,” Zinger said.

Now, Zinger takes two immunosuppressives to fight off flare-ups and to keep the disease in remission, and having to go through this struggle has given him a new appreciation for the game he loves.

“I don’t take it for granted anymore,” Zinger said. “I’m just happy to be out here contributing and doing what I can to help everybody succeed.”

After all he has gone through the Leesville, La. native still has his senior year to finish off strong.

“It makes me feel really good because I’ve been through a lot this past year being up and down, and it just feels good to be back to normal and doing what I have been doing for the past 10 years.

It’s back to normal for Zinger — playing football games in Tiger Stadium, not watching them on TV.