No. 21 Volleyball Travels to Iowa Challenge 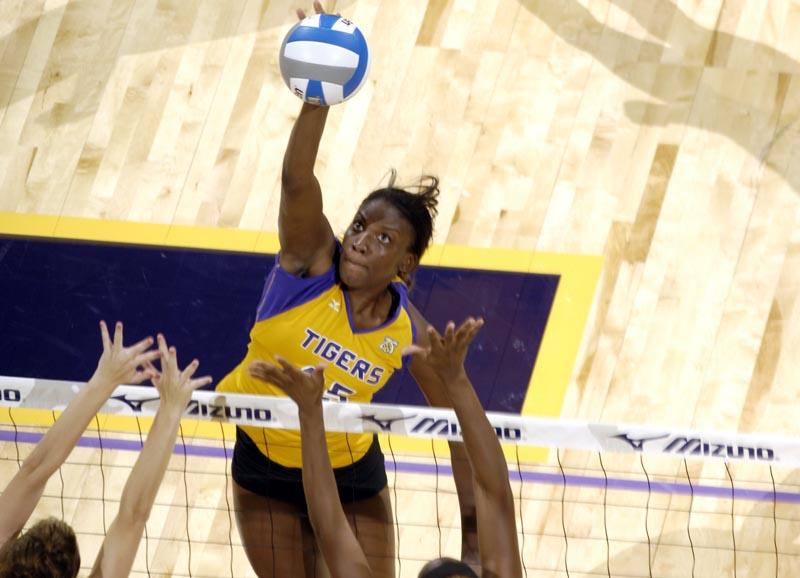 DES MOINES, Iowa — The 21st-ranked LSU volleyball team will take its undefeated record to Iowa this weekend as the Tigers participate in the Iowa Challenge hosted by Drake University.

LSU will face Iowa State on Friday at 5 p.m. before closing out the tournament on Saturday against Drake at 10 a.m. and Iowa at 5:30 p.m. Last weekend, LSU went 3-0 to claim the Mizuno Invitational II championship. The Tigers defeated Illinois in five games, before posting a sweep of Texas A&M-Corpus Christi and a four-game win over Rice.

“We’re 6-0 this season and excited to be there,” said LSU head coach Fran Flory. “We’re still a work in progress and we’re not there yet. We go to Drake this weekend where we play Iowa State, who is an up-and-comer in the Big 12, and Iowa, who is a solid team in the Big 10. We’re excited about our team and excited to go to Des Moines to see how we do against a little higher competition.”

DeGirolamo tied for the fourth most total blocks in a four-game match with 12 and the sixth most block assists with nine. In back-to-back matches, DeGirolamo tied her career high with 17 kills against Texas A&M-Corpus Christi and Rice. Against the Islanders, she also hit a team-best .531 with seven blocks and six digs. With her 12 blocks and 17 kills against the Owls, it marked her fourth career double-double.

“Before the season I said that Lauren DeGirolamo would have an All-America-type season and she is doing that,” said Flory. “She is putting incredible numbers, some of the best in the history of LSU volleyball.”

“Brittnee Cooper has arrived,” said Flory. “She is definitely a force. Kyna Washington is our go-to there is no doubt about it. She is a great athlete and a great player and is going to make things happen for us.”

In the weekend finale against Rice, Martinez recorded 30 digs in the four-game win, which tied for the second-most digs in any match in LSU history. It also marked the second most digs in a four-game match by a Tiger. In the weekend opening win against Illinois, she posted 20 digs in the five-game match, before posting 19 in a three-game win over Texas A&M-Corpus Christi.

Drake enters the Iowa Challenge with a record of 2-2. The Bulldogs opened the year with a loss to UMKC, before going 2-1 in the Hampton Inn Invitational last weekend. Emily Madden leads the Bulldogs with 3.31 kills per game, while Mikayla Sims is second on the team with 3.12 kills per game and leads the team with a .316 hitting percentage. Samantha Nelson is the only Drake player with over a block a game, coming in with 1.06, and Alana Wittenburg leading the Bulldogs with 3.94 digs per game.

Iowa enters the weekend with a record of 4-1. The Hawkeyes rebounded from a season-opening five-game loss to nationally ranked BYU to win their last four contests. Catherine Smale leads the Hawkeyes with 2.80 kills per game, one of five Iowa players averaging over two kills per game. The Hawkeyes have two players with over a block per game, led by Laura Kremer with 1.55 and Becky Walters with 1.20.

“We open SEC play next week and we really need to be prepared,” said Flory. “We open up at Ole Miss and that is a really tough place to play. They are playing really well. They have knocked off some teams that are receiving votes and they are actually getting votes in the poll. I’ll be a tough way to open the conference season.”