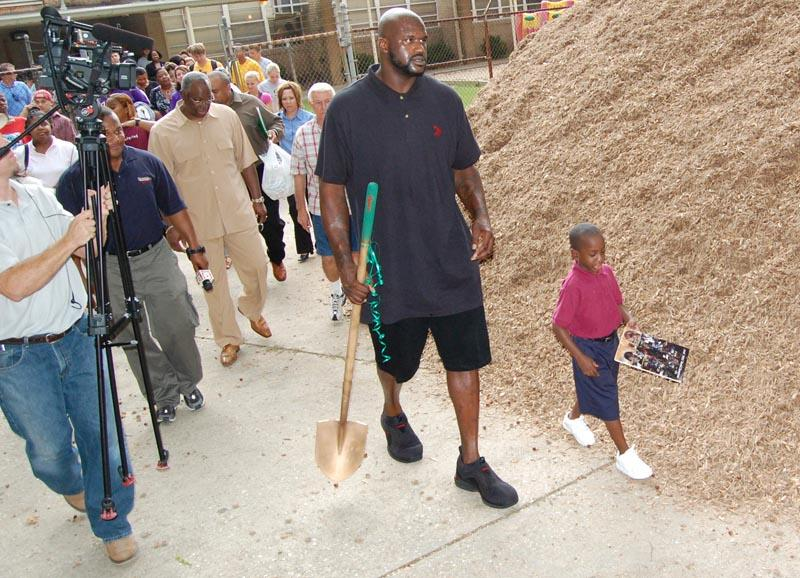 84 Lumber donated $20,000 and hundreds of man-hours to LSU’s CHAMPS/Life Skills program, which provided the necessary funds for the Polk project.  In addition to 84 Lumber’s monetary and materials donation, other companies supplied materials, including: paint by Dutch Boy; supplies from Linzer Brush, Intertape and Union Tools; carpeting from Shaw Carpeting; and tractors from Louisiana John Deere Dealers.

O’Neal spoke to an assembly of Polk Elementary students at 9:45 a.m. before LSU student-athletes, a crew of 84 Lumber workers and the staff of LSU Sports Properties began renovation of the playground.

Student-athletes worked at the elementary school throughout the day until around 5 p.m. helping with the project.

Soccer team captain Sara Pollock and members of the LSU baseball team will be out at Polk Elementary around 9:30 a.m. Joining the renovation around 10 a.m. will be members of the women’s golf team, with members of the men’s tennis team following at 10:30 a.m.

Men’s basketball standout Garrett Temple attended Polk Elementary and helped to give back to the school as he pitched in started at 11:30 a.m.

In addition, members of the women’s basketball team began helping around noon, while members of the gymnastics team took part for several hours in the afternoon along with members of the softball and cross country teams.

Olympic gold medalist, one of the game’s 50 greatest players, three-time MVP of the NBA Finals, nine-time all-star and after the 2006 season, part of four NBA championship teams, O’Neal is considered one of the most dominant players in the game of basketball. He was drafted as the No. 1 overall pick by the Orlando Magic following the 1992 season at LSU. While a Tiger, he was a two-time consensus Southeastern Conference Player of the Year and first-team All-American. He was selected the National Player of the Year by the Associated Press (Rupp Award), United Press International, L. A. Gear and Sports Illustrated in 1991, while also winning the Tanqueray World Amateur Athlete of the Year Award.

The CHAMPS (Challenging Athletes Minds for Personal Success)/Life Skills Program was designed by the NCAA to help student-athletes realize higher academic achievement, increase likelihood of graduation and enter a chosen profession with a higher level of vision, knowledge, motivation, self-responsibility and greater overall success. In Spring 2003, the CHAMPS/ Life Skills Program honored one of LSU’s most memorable graduates by naming the program after him.

84 Lumber’s involvement with the Polk project is part of the company’s ongoing rebuilding efforts in Louisiana and the Gulf Coast region. Founded in 1956, 84 Lumber Company is the nation’s leading privately held building materials and services supplier to professional builders. The company encompasses over 475 locations nationwide, including 24 component manufacturing facilities. Nearly 10,500 84 Lumber associates, including 2,500 outside sales representatives, provide one-on-one service to every customer, ensuring an efficient and satisfying purchasing experience.