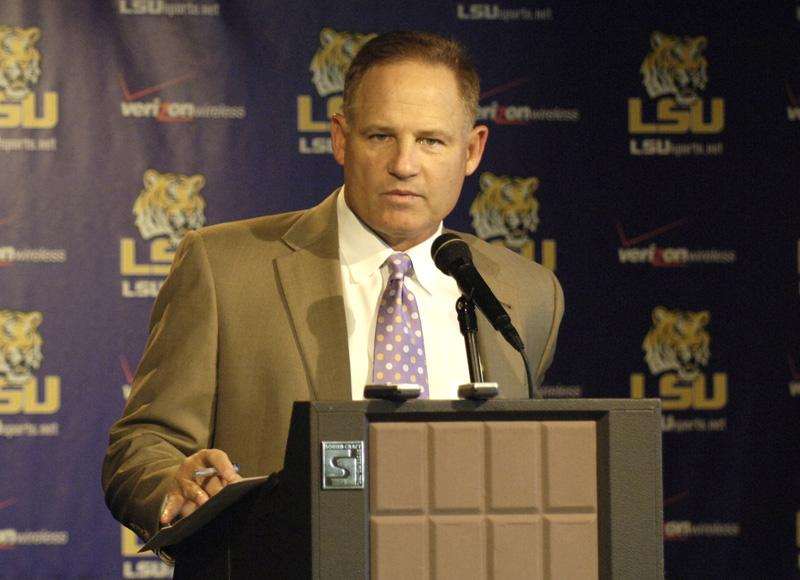 BATON ROUGE — Prior to beginning preparations for this week’s clash of Top 10 teams, LSU head coach Les Miles spoke to the media about his team’s victory over Mississippi State as well as the matchup with the Virginia Tech Hokies. Watch on-demand in the Geaux Zone.

LSU also announced that the Sept. 15 game against Middle Tennessee will be made available on TigerVision, the athletics department’s in-house pay-per-view television network. Kickoff will be at 7 p.m. in Tiger Stadium.

2 p.m.
Tiger One Village opens on the south side of the Maravich Center facing Tiger Stadium.

8:14 p.m.
Team captains meet at midfield for the coin toss.

Opening statement…
“Happy Labor Day. I know you guys are excited about that even though none of us get the day off. If you review the Mississippi State game, the most important statistic may be the turnover margin. Defensively we were dominant and had seven turnovers and on offense we were perfect with no turnovers. If we look back on this year and we continue that strong play and it becomes a characteristic of our team, it will certainly reflect a very successful campaign.”

“Offensively, I felt we did good things at times. We need to correct some things with penalties and miscues by some first time players. That is the business at hand ? improving. Matt Flynn had a nice outing. He managed the game well. He avoided negative plays and made some great throw-a-ways. His play was certainly not perfect but it was what we look for on a regular basis.”

“Defensively, wow! That was as dominant of a defensive performance that I have been around. With seven turnovers, our defense was flying to the ball. They showed great effort on that day.”

“On special teams, Patrick Fisher had one of the best punting days that I have been around. He averaged around 45 yards per punt. He had two opportunities to kick it in short field. He got one but missed narrowly on the other. If he had hit that one, his day would have been spectacular. It was really a great start for him.”

“As I have noticed in the past when we travel, the LSU faithful that show up to the away stadiums are really appreciated by our team. I can tell you that we notice it and its fun for our players and coaches to see the purple the gold. Thanks, and you guys do make a difference.”

“Its game week here and we are glad to be home. We are glad to be playing in Tiger Stadium and glad to be around the new Mike the Tiger. I haven’t seen him yet. My kids have talked about him. Everybody has made note he will eventually grow to 700 pounds. I think that is a heck of a thing. I may grow to 700 pounds if I don’t watch what I am eating. We are looking forward to being home. I know ESPN GameDay is coming and we are playing a great team.  This Virginia Tech team has dealt with some difficult issues as of late and we are very sympathetic to what they are going through. We understand, from a distance, how difficult it must be. We are very compassionate and understand what they are going through. We hope that things are mending and getting back to normal very quickly.”

“Coach Beamer at Virginia Tech is a tremendous coach and has been for years. What he has done with his program has really been a point of emphasis for any coach that wants to run a program and do things the right way. I look forward to seeing him and talking to him before and after the game. With great respect we look forward to playing Virginia Tech. They beat a talented East Carolina team. When we looked at the film, you could see that East Carolina had a number of talented players. Virginia Tech really controlled the game from the beginning. Being 1-0 is reminiscent of a team that has won at least 10 games in four of the last five years.”

“As we look at Virginia Tech, quarterback Sean Glennon threw for 245 yards. He is a guys that can see the field and makes good decisions. Their running back Branden Ore is a very talented and patient back. You could see in their game that it got to a point where East Carolina was so focused on the run that it was difficult for them to get back on track. That is why Glennon had such a nice day. You could see that the patience and talent the guy shows. He had around 1,100 yards a year ago. We have to make sure we have 11 guys focused on him whenever he runs the football. Maybe their best player on offense is their tight end (Sam) Wheeler. He is a good blocker and had 7 receptions for 81 yards in the East Carolina game. They have a solid receiving core and offensive line. Their offense is going to be a much different challenge then last week’s (Mississippi State.)”

“Their defense plays a great scheme and has been nationally ranked for years. They put hybrid players in. They play their guys interchangeably. They are very comfortable with their safeties down in the box trying to stop the run. They are a very physical football team. They return three starters on the defensive line. The corner Brandon Flowers is one of marquee corners in college football. We expect a strong showing from their defense.”

“On special teams, they have a national reputation for their special teams. It is going to be a great challenge for our guys. We understand they have the ability to block kicks and we need to protect our kicks. That will be a great match up. And yes I understand that may be one of the key pieces to our game plan.”

“The key for us is to make sure we are focused on our business and improving our team. We need to do the things we have always done to be successful here. If we do that and have a great week of preparation and put an improved team in Tiger Stadium we will have a great outing. The captains for this week picked by the coaches every week so that there is a broad representation of leadership and to reward guys who are leaders and play well. Jacob Hester for special teams, he made a number of plays and tackles. Early Doucet for offense, who had a great performance and has been a leader within our program for quite some time. Ali Highsmith for defense, he had a tremendous game, he is on our unity council and has been a vocal leader for our football team.”

On what fans should take away from LSU and Virginia Tech’s first game…
“I think that we will get better. You get a view on how the player sees himself and how he plays. Then that player gets to review how he plays and the adjustments there after are very important. I feel our football team will return to the football field this Saturday much improved. There was no real reason to hide things that we are doing. You saw our football team.”

On Ryan Perrilloux‘s performance in the Mississippi State game…
“We were fortunate to get a number of guys on the field and anytime that happens it benefit our football team. The benefits our first and foremost the reward they get for the hard work they go through to participate.  We need that and getting Ryan on the field benefits us as we go forward. We expect him to play in every game.”

On if the Appalachian State game is a cautionary tale for other highly-ranked teams…
“I can only tell you that the men that represent Michigan are hard pressed to find a smile. I believe that they understand adversity and they will do the right things. I trust and am comfortable with what Lloyd Carr will have them do. It is not the first time, during many seasons there are times where you have to pick yourself up and play. I also understand that Appalachian State is a great football team. No one has to apologize for the style they are. They are a winning team and a national championship team. There is a constant reminder with any team that takes the field. If you are not ready to play your opponent, you suddenly become very even. If you don’t have intensity and a want to compete then suddenly you become very average. We understand that and all we need to be motivated for this week is Virginia Tech. Seeing Virginia Tech on film kind of wakes you up.”

On preparing for Virginia Tech’s special teams…
“They employ a percentage of ?come get ya’ plays and a percentage of return plays. It is done with great deliberation. We did get a lot of summer work in knowing that we would play them. We know we would only have the East Carolina game to watch for them. We took time in the summer to study it, but not that the plans are all ironed out. Because what happens is when you take the field in the first game, you find out a little bit about your team. We want to see who we have and how it is going before we start calling plays.”

On if there is a parallel with the Virginia Tech tragedy and his team dealing with the Hurricanes two years ago…
“I think there are similarities between the two teams. It is a tremendous opportunity to rally for a cause. There isn’t any question that it is a motivating factor. They will represent their state just like we felt obligated, and enjoyed doing, to represent ours in 2005. It is a very private thing. It will come from the Virginia Tech locker room. I try to understand where they are at as best as I can from being an outsider.”

On if Sean Glennon reminds him of Matt Flynn…
“It appears to me that he (Glennon) has a comfortable leadership style and from watching him he has a lot of ability. He has a strong arm. Other then that I don’t know what kind of similarities can be made.”

On playing a top-10 team at home…
“We enjoy playing at home and our home-field advantage is a significant one. Our guys play their best football in front of our fans. Every game is important but the next one is always the most important.”